AFI Dallas: EVANGELION 1.0: YOU ARE (NOT) ALONE Review 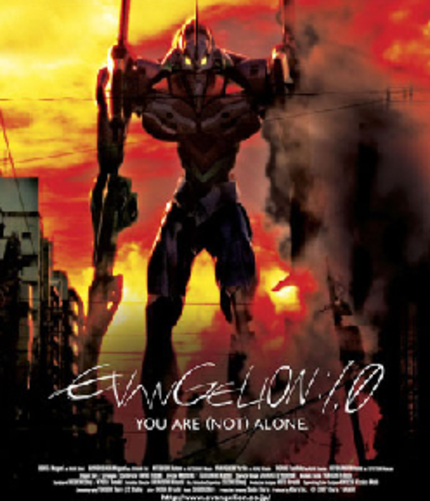 As I've admitted before (see ScreenAnarchy-o-Meter linked below), I'm a new anime enthusiast, and people have been generous with their recommendations. Fellow ScreenAnarchy writer Ard Vijn and commenter skout suggested I check out Neon Genesis Evangelion, which is still on my "to see" list, but when Evangelion 1.0: You Are Not Alone popped up on the AFI Dallas schedule, my curiosity was piqued.

Released in Japan in September 2007, Evangelion 1.0: You Are Not Alone (abbreviated herein as YANA) is "essentially a compression and polish job on events lifted directly from the original television series," as aptly described by Todd Brown. Having never seen the series, all I can say is, "Wow!" Longtime fans may feel quite differently, of course, and are invited to express themselves in the comments.

In effect, YANA says, "Let's quickly strap you into the driver's seat of a giant robot and commence smashing things."

Shinji Ikari is a young teenage boy who is whisked away to visit his scientist father at NERV, a secretive government facility. He is picked up in a devastated neighborhood of Tokyo by Misato, a young woman who drives fast and fills the role of "synopsis girl," providing narrative details as needed.

When the duo arrives inside the heart of NERV, Shinji is brusquely introduced to Ritsuko, who seems to be Misato's superior, but is barely acknowledged by his father, who glowers down at Shinji from an upstairs control room and demands that he pilot a giant robot he's never seen before. He's needed as a replacement for previous pilots that have all failed in their mission. Rather understandably, Shinji balks, whereupon Commander Ikari summons the badly-injured Rei, a young teenage girl who is brought in on a stretcher.

Shinji finally agrees, and before he can quite wrap his head around the idea, he's at the helm of a giant mechanical synthetic human known as Evangelion, AKA Eva. The city is under attack by a series of beings called Angels, and the military and their weapons have been ineffective in defeating them. Under the control of Shinji, Eva defeats the Angel.

The battle is fierce, wild, and pretty much all I'd want from an animated battle between two giant monsters tearing through a city.

The 20-something Misato invites Shinji to be her roommate, allowing for some fan service. The next day at school, Shinji gets beat up by a bully, whose sister was injured in the giant robot battle, and deeper themes than smash and grab begin to emerge. Shinji feels like a loser, without a mother and with a father who doesn't seem to care about him. We learn that the so-called "second launch," or attack by previous Angels, destroyed half the world's population, and a successful "third launch" would wipe out the rest of the humanity. Thus, the future of the human race depends upon defeating the Angels; since only Eva can do so, and only Shinji has successfully piloted Eva, the future of the human race depends upon Shinji.

And he doesn't want that.

He doesn't know why he was picked, doesn't want to be "the one," and, frankly, doesn't want the responbility. He'd rather die or just crawl into a hole; he feels utterly alone and useless. He's puzzled and irritated that his father has more outward concern for Rei, who turns out to be a disconsolate schoolmate, always alone, without any friends, staring listlessly into the sky.

With a good, snappy pace, YANA is very accessible for newbies like me, leaning heavily on terrific action scenes but with enough hints at greater depth to invite continued interest in the next three films to come. I left the theater feeling satisfied from the combination of entertainment and somber contemplation of the future.

The AFI Dallas screening of the Japanese-language production was arranged through Funimation, which will be releasing it on Region 1 DVD in November 2009.

More about Evangelion 1.0: You Are (Not) Alone