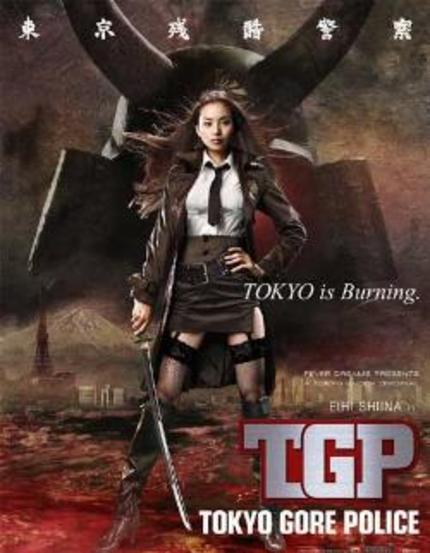 Given the amount of coverage that Tokyo Gore Police (Tôkyô zankoku keisatsu) gets on ScreenAnarchy, it is easy to forget that the film has not been released on DVD and has only screened a few times in the United States. The latest U.S. screening of Yoshihiro Nishimura's film occurred on August 15, 2008 at the Asian Film Festival of Dallas (AFFD). Tokyo Gore Police deserves the attention its been getting because it is a great riff on films such as Robo-Cop but with a unique Japanese flavor.

In a future version of Japan, a private company takes over policing functions throughout the country. A special police squad known as the Tokyo Gore Police is tasked with handling a breed of mutants who can turn wounds into weapons ("engineers"). Ruka (played by Eihi Shiina) is the star of the squad. She is tormented by the assassination of her father, a police officer who spoke out against the privatization of the police. Ruka eventually finds the assassin, and learns the secrets behind both her father's death and the police force to which she has devoted her life.

This back story can easily be ignored as the attraction of Tokyo Gore Police lies in its over-the-top action, and insane visual effects. Nishimura was not working with a big budget but the choices in set design and effects are very resourceful. The film throws everything at the screen, including blood spraying from dismembered torsos in slow-motion, exotic weapons sprouting from injured body parts, and bondage-garbed quadriplegics walking on swords. The Robo-Cop influence is apparent through out, particularly in a series of tongue-and-cheek television ads for products that make it easier to commit suicide. Tak Sakaguchi, who is AFFD's special guest for 2008, served as fight choreographer, and these sequences are well-done but are cut a little too fast. This is a quibble, though.

Those in the states who missed the AFFD screening will get another chance to catch the film at Fantastic Fest in September 2008. This might be the last time U.S. viewers will be able to see Tokyo Gore Police on the screen this year.