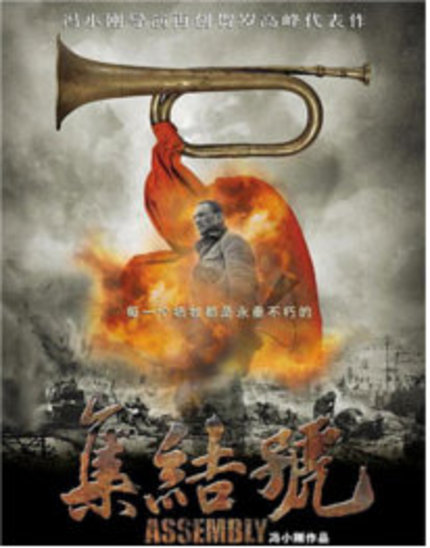 Feng Xiaogang's Assembly (Ji jie hao) is a war film with an epic sweep. Assembly , which tells the true story of an infantry commander during the Chinese Civil War, presents both the intensity of battle and the quest for peace and recognition by those who give their lives in times of war.

Assembly begins in 1948. It was in this year that the Nationalist Army and People's Liberation Army clashed in the Huahai Campaign of the Chinese Civil War. Captain Guzidi (played by Hanyu Zhang) was commander of the Ninth Company infantry unit for the People's Liberation Army. The Ninth Company was assigned to defend the south bank of the Wen River where they established a base on a coal mine. Gudzidi's orders were to fight until the retreat bugle call was made. As the fight dragged on and their numbers dwindled, the soldiers awaited the sounding of the bugle call. Some men said they heard the call, and others said they did not. Guzidi, whose hearing was deafened by artillery fire, was among those who did not hear the call. Thus, he maintained the unit's position per his commander's orders. Guzidi turned out to be the lone survivor of the battle. Upon waking up in a hospital, Guzidi discovered that his unit was reorganized after the war; the identify of he and his comrades were lost, and all were declared to be missing. Guzidi, who was wracked with guilt for not hearing the bugle call, then dedicated his life to proving the existence of his unit and the men who died in battle.

Assembly is split into two distinct halves with Guzidi character at the center of both. The first half of the film documents the series of battles leading to the decimation of Guzidi's infantry unit. This portion of the film alternate between lengthy, intense battle sequences and relatively claim moments spent in preparation for fighting. The large-scale battles are intense and convincingly staged. The combination of shaky camera and quick cuts approximate (as best as one can imagine) the adrenaline and chaos of combat. The cinematography, which was handled by Yue Lu (Red Cliff), is remarkable. His chosen color palette, which places alternating emphases of white, grey, and black backgrounds and foregrounds, gives this portion of the film a rich, monochrome look.

The second half of the film focuses on Guzidi's post-injury reintegration into the military and his attempts to have the government recognize the existence of his infantry unit. At this point, the film turns into a straight ahead drama albeit a weighty one given what the audience experiences in the first hour or so. Hanyu Zhang carries the rest of the film with his strong portrayal of the Guzidi character. Yue Lu shifts the color palette towards brighter colors, emphasizing the change in China since the battle at the mine (e.g., forests grew over the battlefields, and mountains of coal buried the mine shafts in which the Ninth Company were buried).

Those looking for critical commentary regarding the Chinese Civil War or the nature of war itself will not find what they want in Assembly. Every nation has its war stories, and the way these stories are told are as varied as the nations from which they originate. Thus, to criticize Assembly for not addressing specific political issues is to hold the film to a standard to which few films are held. Whats more, Assembly is as much the story of an individual searching for peace and truth as it is a story of a war. Such stories transcend the politics of any given moment, and serve as the foundation for all human drama.