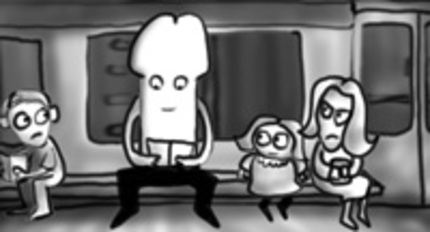 Time once again for another preview of part of the program of this years Worldwide Short Film Festival. Today, the safety is off and taboos are set aside as we explore the kinky side of short film with a selection of humorous and sexy shorts.

Things get 'animated' right from the start as we here the woes and troubles of Richard in A Day In The Life of Richard, a six foot penis with trouble fitting into normal society. Other animated and funny offerings include two very quick shorts from Wade Vroom, T-Sex and Daddy, Where Does Chocolate Milk Come From?, and The Adventures of Baxter & McGuire - call that one a different take on the buddy flick. Way different.

When approaching the theme of 'exploration' I honestly hope that none of my mates ask me what hard-rocking Pera asks of his band mate in A Mate. I think my friends will be pleased to know that I am not... uh... that committed to our friendships. In I've Never Had Sex, offering his mobile phone as a digital tell-all and confessional, director Robert Kennedy asks just how far, or where, or how, some folks have gone into their sexual escapades.

In Size Matters and Love is Love the gender and orientation roles are reversed respectively. Does anyone remember that episode of Family Guy where Stewie says something along the lines of, 'It's like throwing a hot dog down a hallway'? In Size Matters a woman can't keep a relationship because she is simply to big for the boys, if you know what I mean. It's funny, but could have benefited from cutting out the jokes at the end. They felt unnecessary, like grasping at the funny straws. And Turn on your Strai-dar, Love is Love asks what if homosexual relations are the norm and heterosexuals are ostracized. Look for Margaret Cho's cameo as the butch!

Finally, in what I'll dub the 'punchline' shorts, Souvenir takes a humorous look at landing a celebrity in bed only to be baffled by his apartment's plumbing the morning after. And in A Dose of the Guilts we see that promiscuity and the hard of hearing don't always make good bed mates. Both shorts use the length of their films to build up to the big punchline in the end. A Dose of the Guilts chooses to go the funny route while Souvenir fuddles about at a posh Parisian house party before settling down to set up the big joke at the end of film. Nice pay off though.

Buy your tickets at the official site