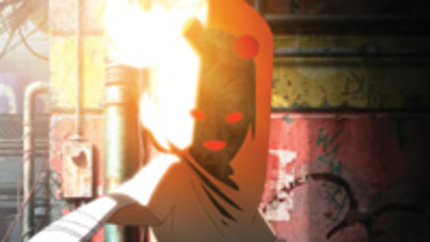 Animation freaks and geeks, your Tengoku has arrived. On a global scale there are few, if any, who can compare to the Japanese and their animation prowess. They are simply deities of the animated world. And when you tap into one of the best studios in Japan, STUDIO 4°C, and create a showcase of their works you have to be prepared for the massive tide of talent. On an unprecedented evening you will bear witness to not one but two collections of short films from this massively talented studio, Genius Party and Genius Party Beyond. You also have to understand what a massive coup this is getting these omnibuses into the festival. This will be only the second time that Genius Party Beyond has screened outside of Japan. Yes. You are the privileged few.

And do not forget about STUDIO 4°C - Animation in Translation Symposium with SHINICHIRO WATANABE of Cowboy Beepop and Samurai Champloo fame.

Dear god where do you start? Atsuko Fukushima gets things rolling with GENIUS PARTY (OPENING). A bird-man walks through the desert. He learns to fly and rocks learn to love. It is a very spirited opening to the film. Next, Shoji Kawamori’s Shanghai Dragon is sure to be a crowd pleaser. Alien invasion, Giant robots and the fate of the world lies in the hands of a six year-old child and his futuristic pencil. Then the studio displays its skills at CG animation with a very fun short from Shinji Kimura, Deathtic 4. Think of a Japanese spin on a Tim Burton underworld that accidentally gets invaded by a live frog. Call the zombies. Call the police. Call the zombie police! Good times. Following that is Yoji Fukuyama’s Doorbell. A young boy is startled to find out that wherever he goes he is already there ahead of himself. Can he get to a destination before his doppelganger does? I know, weird. Then sit back, relax and let the philosophical rush of Hideki Futamura’s Limit Cycle run over you. Pascal, Jewish mysticism and cyberpunk clash in this visually stunning and intellectually demanding piece. Anyone who says cartoons are stupid needs to see this. And then one of my favorite directors Masaaki Yuasa of Mindgame, Kemonozume and Kaiba fame gives us Happy Machine. His free form animation style is in top form as we follow a baby after his ‘happy machine’ runs out of fuel/energy/juice. Of course, no omnibus on Japanese animation would be complete without the teenage unrequited love story. Oddly enough, Baby Blue comes from Shinichiro Watanabe, the guy who directed Cowboy Beepop and Samurai Champloo. This is decidedly different story for him. But I am a sucker for animated love stories and Watanabe’s is good. Sniff Sniff. I need a Kleenex.

Remember, you’re the second audience outside of Japan who will have seen this. And you are in for a treat! Beyond starts off with Gala. All is quiet on an alien world when a large object falls from the sky. The local residents act in fear but a small group sense there is something bigger inside this object, and it is alive. Join the celebration of life and music. Follow that up with the frantic Moondrive by Kazuto Nakazawa. A small band of treasure hunters follow a map to a hidden treasure on a remote moon orbiting earth. It’s manic. It’s funny. It’s furious. Always read the fine print. It is really hard to put a label on Shinya Ohira’s Wanwa the Doggy. Displaying an incredibly catchy free form of animation style we explore the dream of a young boy. There are no limits and no bounds in your dreams and if this short is at all accurate then our kids are messed up! Then things quiet down a bit for the very methodical Tou Jin Kit by Tatsuyuki Tanaka. It’s a little bit steam punk. It’s a little bit Big Brother. Tou Jin Kit nicely brings the pace back to normal levels with its sepia tone bliss. But never fear because Koji Morimoto’s Dimension Bomb is set to blow up in your face and take you for an unreal ride. I can’t even begin to explain what in happening on the screen but by golly it looks damned good and full of unforgettable imagery. It’s the best way to close of this collection. Just awesome!

Buy your tickets for this once in a lifetime event here.