WSFF08: 'Sci-fi: Out There' program preview 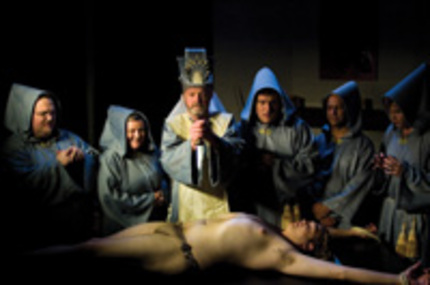 Round two of our preview of this year's edition of the Worldwide Short Film Festival. Tonight we look at the Sci-fi program Sci-fi: Out There. Compiled of 9 short films and clocking in over and hour and a half the program will offer viewers a diverse perspective on sci-fi cinema. Personally, I thought the bill started a bit slow but by golly does it pick up after the first couple shorts.

Things really started clicking for me with the animated short Rocket Science which had this great 1950s science fiction film approach but with noir film dialogue. She’s not just a woman, she’s a scientist. Great stuff.

Another favorite of mine was Martians Go Home!, a Spanish language film about alien invaders raising the dead to take over the world. At first I thought the director, Dani Moreno, was channeling Guy Maddin in his first scene but he switches lenses and films the meat of the film in such a way that you’d think you were watching an after school special you found on a VCR cassette at the neighborhood garage sale, Martians Go Home! Is saturated with vibrant colors, gallons of alien bodily fluid and a lead character I swear would pass as a Spanish Geddy Lee. It comes as no surprise that he picks up a guitar near the end of the short.

We’ve spoken a fair deal about Blood Will Tell, the animated short from Andrew McPhillips, and it is clear to see why. Oh. My. God. It is haunting. It is gorgeous. And it features music by Sigur Ros. Really, need we say anything else about it? See for yourself.

The icing on the cake is Ascension. During a blackout a tenant mistakenly walks into another apartment and disturbs a doomsday cult mid-ceremony. Stephen Irwin’s very funny film comes to us from Australia and is guaranteed to make you chuckle not once, not twice, but at least thrice. A very funny piece to cap off a strong program.

But your tickets at the official site