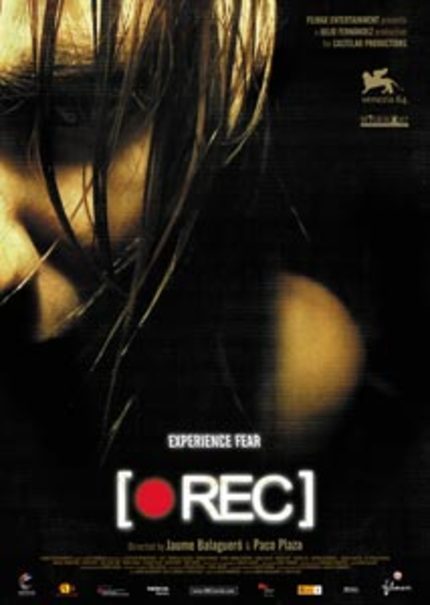 Confession time:
The last 20 minutes of this movie I watched with fingers in my ears and peeping through my eyelashes, determined not to jump out of my seat like the directors had already managed a couple of times before...
For "[°REC]" must be one of the best seat-jumpers ever made, undoubtedly amongst the cleverest and funniest films in this years' festival! I've never before seen a press audience move and giggle (nervously) this much during a movie.

By now you've probably heard about this one already: like "Cloverfield", "[°REC]" follows the "Blair Witch" modus operandi of being a found tape.
But instead of a seemingly endless stretch of forest the camera crew now finds itself confined within a small apartment complex, where they encounter...

...either zombies or people suffering from the worst possible case of Tonsillitis!

Read on after the break...

Reporter Angela and her cameraman Pablo are documenting a night at a Barcelona firestation for the reality show "While You are Sleeping". Trouble is, there's nothing happening that night so they have a hard time getting to film any interesting material. But finally there is a call: an old woman has locked herself in her apartment and can't get out. Not exactly the biggest emergency but at least Angela and Pablo have a chance to see the firemen move, so they choose to document the entire process.

But when the apartment door is forced open the crazy inhabitant attacks everyone in sight, leaving several people wounded. The firemen try to get the victims to hospital, but suddenly all exits are sealed and the police warns everybody to stay inside until a team for biological, nuclear and chemical disasters arrives. Because whatever the old woman is suffering from seems to be contagious.
Must be one of those days...

Whoa! Once this sucker starts moving there's no stopping it. Lots of films get called "a rollercoaster ride" these days, but this is the first time I've really felt like I was in a carnival for most of the movie. It features the much maligned "first person view" shaky cam (so you might want to stay away from the front seats of the cinema) and allegedly all footage is done by this one camera. Pablo must be the most professional cameraman ever because he even keeps filming when charged by howling maniacs, but it speaks volumes about the speed of this film that you never notice it as odd.

Half the fun is trying to determine where it all goes wrong. Even though there is obviously a crisis going on, at several times in the movie it seems like the situation is under control. But you know that's not gonna last of course: following horror movie rules it should quickly go from "easily salvageable" to "barely do-able with lousy odds", to "utterly hopeless". But seeing this happen is, well, fun!
Guessing which mistake is about to be made (and by whom) is part of the film's attraction.

Directors Jaume Balagueró and Paco Plaza milk this idea for all its worth, creating tension after tension on top of tension, with added tension. Did I mention this movie gets tense? They also never explicitly state if the afflicted are undead, rabid or demonically possessed. Because of this uncertainty you don't know what "rules" apply. Are these raging maniacs slow or fast? Is a good kick to the body enough to stop these things? Or do you need a headshot? Dismemberment? Anesthetic? Antibiotics? Holy water? Love?
Surprisingly, these two creators also manage to give the story an unexpected twist or two, which is not easy given the huge number of zombie movies which have recently been unleashed on us.

But most of all, these bastards know how to make you jump! I normally hate unfair jump-scares, but these are all done with a joyous glee instead of the tired clichés which plague so many wannabe-horror films. After each shock you're left with a feeling like "Ooh, nice one". And you're bound to notice people in the cinema who jumped harder than you, which is also great fun.

It doesn't stop there: all actors are good and seem happy to participate in this joke. Reporter Angela is played by Manuela Velasco, who plays her part convincingly and is almost illegally cute. Ferran Terraza is excellent as Manu, the heroic bald fireman who is THE person to lean on in any crisis situation (and, mark these words, would have to be played by Vin Diesel in the American remake). Everyone plays it refreshingly straight, none of this "nudge nudge, wink wink" stuff. The fun is in watching what happens to all these people, not in them acting like a bunch of comedians.

"First person view" might be just a gimmick but when it's used this well I cannot complain about it. It's a movie which is deadly serious in its delivery, yet contagious (haha) in the gory fun the directors are having with their audience. You can almost hear them grin just outside of the camera's vision.

Often have I criticized J-horror movies for just yelling "BOO!" in my face and pretending to be clever. Weird then, that I am so enamored by this little film which does exactly the same! But love it I do, it's one of the best I've seen this festival.

And the general audience seems to agree with me, rating it a 4.30 out of 5, granting it the 13th place (how fitting) in the KPN Audience Award.
Not bad for a bloody genre pic!