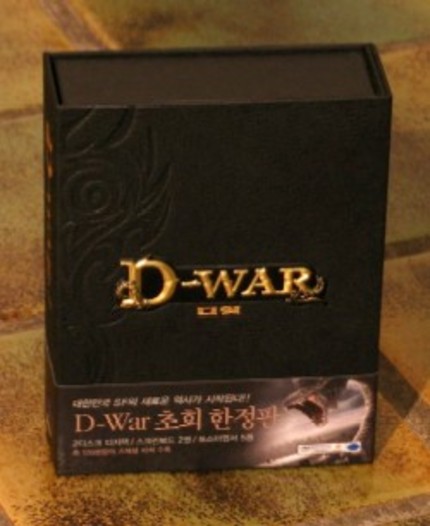 You might have heard about this one, I think we may have covered it earlier on this site. For one thing it has an army of fire-breathing dragons duking it out with apache helicopters in the sunny skies above modern-day Los Angeles. For another thing it has a Godzilla-sized snake climbing a landmark building.

Groovy!
What's not to love? The only thing missing is giant robots!

Yes, it's Shim Hyung-Rae intimate monster epic "D-War", high on sugar, low on fiber. Who needs a coherent story when you've got this many creature shots?

I'll cover the film itself in my review but will try (and fail) to focus more on the recent big Korean DVD release, a Limited Edition no less. Which is predictably gorgeous but, like its movie, rather baffling when scrutinized...


Read on after the break...

Now here is a movie with a troubled history, but to do that story justice I need to have way more knowledge about the Korean film industry (and in particular this "crazy" director) than I currently do.

Thankfully I can refer you to an excellent article on this subject, written by former ScreenAnarchy colleague X!
Good news, as you'll agree. Here it is!

In ancient Korean lore, the imoogi are mythical serpents who look like giant snakes. Once every 500 years a good imoogi gets rewarded by heaven and receives a divine essence which allows him to become a celestial dragon.

But 500 years ago an evil imoogi tried stealing the essence. Therefore it was hidden on Earth in the body of a girl, who could give it to the good imoogi on her twentieth birthday (dying in the process, but hey, it's for a good cause!). Evil hordes tried capturing the girl but she committed suicide and the essence was lost.

Until now: a new vessel of divine essence is about to turn twenty, and the armies of good and evil are looking for her in Los Angeles.
Problem is the evil imoogi's army is, well, an ARMY while the good side is only represented by some locals who have puzzling premonitions.

Reviewing this one will be difficult because of a "tiny" defect I have: my inner twelve-year-old is very much alive and kicking. And while part of me can easily dismiss this as garbage, the teenage leprechaun I used to be is screeching with glee inside.

If you had asked me 25 years ago to make a list of best movies ever, there would be a quite a number of Ray Harryhausen films on it, including some that I'd hesitate to show to other people these days. At that age I was thoroughly fed up with directors trying to put a second layer in their films, trying to teach you something about humanity. Yuck! To me, all I wanted them to do storywise was the following:

1: Show clearly who the good guys are and who the bad guys are. Different colors will suffice.
2: Have them either hunt for a treasure, race or fight. Or all three.
3: In the end, let the good guys win. Spectacularly for bonus points.

Tadaa! That is all.
No nonsense about (lame) character development, no (lame) romance and no (lame) gray areas.
And continuity is something only my mother would notice.

Well, let me tell you I would have looooooooooved "D-War"! It would rank next to "Transformers" as movie of the year and I wouldn't know which of the two to prefer.

As for that latter part, I still have trouble of picking one over the other but to be honest I expected a lot more from Steven Spielberg and Michael Bay. Both have shown in the past that they can do so much better than the feeble plothole-ridden effects-fest they gave us.

Expectations are a double-edged sword though, because I can do nothing but grin at Shim Hyung-Rae's ridiculously ambitious "independent", especially if you saw his previous movie. Special effects and creature design might normally be icing on the cake but I was certainly impressed by what his studio achieved here, quality-wise but even more quantity-wise. And who hasn't secretly eaten just a bit of icing? It's sweet!

But I'm grown up now, which means my tastes have changed. Although I can still indulge in sweet I can now also savor the bitter parts of life and enjoy the sour fruits of learning by experience. How's that for pretentiousness? Still, pointless though it is, here is a focus on the bad.

The acting is, well, it's there I suppose. It's not that it's BAD so much as that these people find themselves in such implausible situations that you can't tell. So if you're a Robert Forster fan, he's in there, and ... well, it's him, selling Mogwai and providing exposition.
Our leading man and woman are handsome enough and look meticulously groomed, but when they finally get to act normal all they have to do is run, RUN, while being chased by a wild assortment of special effects which are more watchable than them.

As for the script: it is "The Terminator" with dragons. Two sides hunting after the same girl (called "Sarah", which is a HELL of a coincidence!) in sunny L.A., basically making it a race who reaches her first. Then it turns into a run for safety, the hero and heroine chased by a virtually indestructible opponent. One of its taglines is even "The Fight for the Future Starts Now"! Hm...
But where "The Terminator" was a clever little film, "D-War" goes for big and dumb, the ultimate blunt instrument.
Boom! Wham! Plothole! What next? Ehm... MORE DRAGONS!

Thing is, it sort of gets away with it because the dragons are very cool and executed far better than I expected. And like I mentioned, there are a lot of them, so be assured of some wholesale destruction. If you've seen that poster of the snake climbing that office tower, the movie actually delivers on that image without cheating or making a fleeting glimpse or a distance shot out of it.
Applause!

A major, MAJOR guilty pleasure.
Clunky as hell, because the two factors which normally would make a movie good are severely lacking here: script and acting. But with its VAST amount of creature effects it isn't boring, and that's what counts here.

It's the ultimate matinée film, and to me (as a non-Korean) it never seemed to try and make like it was anything else.

Yummie, this is the sort of package I like to get from Korea: gorgeous and big.

The movie itself is on disc one and can be watched in English or Korean, with English or Korean subs. Imagewise it's interlaced (ouch) and a bit soft (more ouch). Both are unnoticeable when watching it on (even a good) television though.

The second disc has the extras, and a word of praise to the designers of this disc's menus. Seriously, you'll want to frame these, they are so beautiful!

But back to content: there are loads and loads of mini-documentaries, ranging from 5 to 25 minutes each. They cover:

Oof! And the majority of it is pretty interesting too. No English subs but most of the material speaks for itself, and some of it is already in English.

But I think it is telling that there isn't even a tiny bit about the actors. No interviews with Jason Behr, Amanda Brooks or Robert Forster. You see Amanda and Jason for a few seconds in the ADR section, but funnily enough you don't get to see them recording their voice. Not a word...

The killer packaging has a fake reptilian leather outside which is soft, so trying to get that paper band off without damaging it took a lot of patience and effort. Who said "just rip it off"? Philistine! It's a Limited Edition, therefore the paper band is Limited too!

Inside are the two discs, each in their own beautifully decorated holders. Then there is a sleeve with a set of postcards, and the two storyboard books.
About these books: they are drawn in a manga style which is funny, but there is also something weird. The story here differs a bit with the final movie, in fact it makes slightly more sense, but they only cover what seems to be the first three-quarters of the film. Is there an even more Limited edition with a third book?
Weird!


And this concludes this DVD-review: I like the set which is "Korean Pimped" like the best of them but I am a bit puzzled by some omissions in its contents.

Mike's review.
You can see more pictures of this edition in our forum.
You can order it here at our affiliate.
And X wrote an article about D-War there.