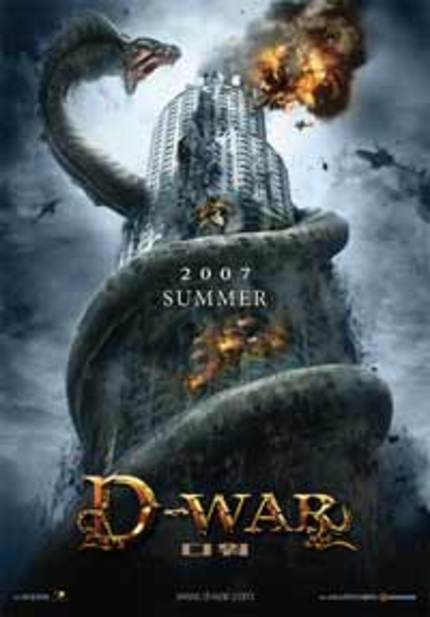 As a fan of the movies, there has always been one type of film that I have always loved. Sad to say, it is the "Monster" film. One of my first childhood movie memories was the 1956 Godzilla. I knew that it was a man in a rubber suit and, to be honest, I did not care. I have amassed a nice collection of the so called "Monster" films. On quiet, rainy days, I still warm up some popcorn and enjoy films from my childhood.

I had heard of "D-War" for many years now, and each time the film had a release date and then the date kept getting pushed back. I kept wondering will this film ever be released. As of today, this is the most expensive Korean Film ever made. With cost rumored to be between 30-100 million dollars, this could even be the biggest risk or failure in Korean film history.

To be honest, the film had every reason I should like it, a big monster, great special effects, a somewhat corny story and a huge battle in L.A. I should have loved it but sad to say, I really hated the film. Based on Korea Pop Wars It looks like I will be in the minority here in Korea. The Korean Producer of the film, Showbox, is prediction an opening weekend of 2-2.5 million tickets sold.

The main reason that I hated the film was very easy. The acting was just that bad. I do not even mean as bad as "Plan 9 from Outer Space", I actually liked that film.

For all of the special effect, the wooden acting just left a bad taste in my mouth. One other reason was the film seemed very rushed at 90 minutes, it had very little plot development and the story, as a whole, just seemed very flat.

If you like monsters, then this will be the summer film for you. The film is in English and Korean so please be ready for that.