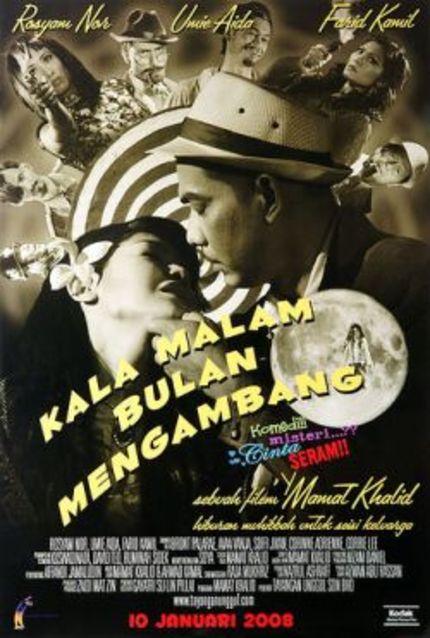 It's a funny coincidence that both Mamat Khalid's Kala Malam Bulan Mengambang (When The Moon Rises) and Joko Anwar's Kala are both currently showing in Malaysian cinemas. It was a comedy of errors in trying to buy tickets to both shows. Both films have the word "kala" in their titles and both adopt noir conventions. But it doesn't just end there. Both also feature supernatural elements and a reporter who's recently out of a job.

Mamat's previous effort, the very funny Zombi Kg Pisang, proved once and for all that he has a good feel for comedy and a penchant for traversing uncharted waters. Zombi was a social satire and a spoof of old B-grade horror films. Although it tends to drag at times, it's still pretty good for a comedy and it has the much envied distinction of being the first Malaysian zombie film ever..

Now he's decided to be even more ambitious with Kala Malam Bulan Mengambang, a black-and-white horror comedy that pays loving tribute to the old Malay movies of the 50s, the golden era of Malay cinema, when films were still largely made on soundstages and in Singapore. The films of that era had stagey set-ups, melodramatic acting and sets that look like sets, but that's their charm and beauty.

Then Mamat takes a page from the noir tradition, with Rosyam Nor (who gives an excellent comic performance here) as Salleh, the quintessential hard-boiled reporter-cum-detective, and a couple of femme fatales. Salleh's car breaks down one night and he ends up in a strange village where people behave strangely and it seems a demon has been hunting men on every full-moon night. Everything seems to be connected to Salleh's discovery of a strange skeleton holding a keris, an ancient Malay weapon. Salleh then meets the mysterious but beautiful Putih (Umie Aida), whose brother, Jongkidin (Farid Kamil), helps Salleh to fix his car.

The first-half of the film is wildly entertaining, as the offbeat characters are introduced (famous local producer David Teo's cameo as a motel-owner is surely going to go down in Malaysian cinema history as one of the most memorable comedy moments!) and the mystery is set up.

But there's never a real mystery as the use of old cinema conventions is already a roadmap for the story. No, the real draw here is seeing how everything is spoofed, and it sure is a lot of fun. And if you're familiar with the Malay films of yore, it's even funnier (veteran actor Kuswadinata plays a character named Dr Rushdi). Just when you think it can't get any sillier, in comes a group of quirky communists with a "master of disguises aka shape-shifter" in tow. And their method of hypnotising and brainwashing is easily the funniest moment in the film, but you have to understand the local dialect, which is used to turn the familiar hypnotism act we've seen so many times before, completely on its head

Despite some underlit and grainy scenes, and a couple of goofs, overall Mamat manages to capture the feel and atmosphere of old cinema. The black-and-white photography is gorgeous in most parts, and the props and backdrops are "authentically 50s," as are the musical numbers. Kudos to the art department which had obviously worked hard to recreate the nostalgic look of this film.

Unfortunately, the novelty kind of tapers off at the halfway mark, although the comedy is still inspired in fits and starts. The fun stops when things suddenly become serious, veering off into pure drama and melancholy. Some people have argued that this is a two-act comprising comedy and tragedy. But I would argue that the transition from spoofing a style to adopting it wholesale are two different matters that do not come together effectively.

The first half plays with old conventions to mine what comedic possibilities there are, which often entails altering the nature or intended effect of those conventions, or placing them in a context that makes them funny. The second half uses these conventions to merely recreate. I came across the same problem in Thailand's Tears Of The Black Tiger, which is merely an homage to old cinema but fails to say anything substantial about it.

Still, Kala Malam is a very daring effort that nicely adds some much needed variety and imagination in Malaysian mainstream comedy, which has long been mired in the usually mundane and formulaic. Mamat Khalid is definitely far more inventive and forward-looking than most Malaysian directors.