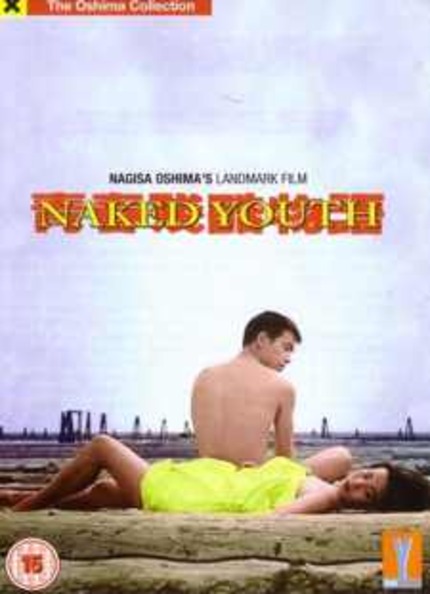 The first of Yume PIctures 2008 releases for what should be five films in total from Nagisa Oshima... this should hopefully be popular with those who are gradually picking up on Japans New Wave films, those who are keen on Masumura in particular.

Synopsis for the UK Release, "Oshima's second feature is a shocking tale of youthful delinquency in post Hiroshima japan. Conveying the pent up sexuality and disillusionment among Japan's post war generation it tells the story of teenage lovers Makato and Kiyoshi. She's a good girl gone bad, dropping out of school and out of home; he's a violent hoodlum, gambler and hustler. Making a living by performing shakedowns and attempting blackmail on unsuspecting middle aged men, the film affords a bleak, nihilistic take to the 'taiyo-zako' (Japanese cinema's 'delinquent youth' films). Often billed as Japan's Rebel Without A Cause, but whereas Jame Dean's Jim Stark had the proverbial heart of gold, Kawazu's Kiyoshi is filled only with rage and disgust. All of life's harsh realities await Makoto and Kiyoshi - this is no morality lesson or cautionary tale, just a window into a terrible vision of humanity." and a synopsis for the USA VHS Release from the late 90's, "Makoto and Kiyoshi's generation follows their desires. She's in high school when a university student, Kiyoshi, rescues her from an older man's assault. The next day he takes her out, is alternately cruel and tender, insists roughly on sex, and then discards her. A week later she calls him; waiting for him at a bar, two pimps accost her. Again Kiyoshi rescues her, and their affair begins in earnest. She moves in with him, continues school, and they support themselves by extorting money from men who offer her a ride and then make a pass: Kiyoshi shows up to beat them. Things are semi-OK until pregnancy and a short stay in jail change their relationship."