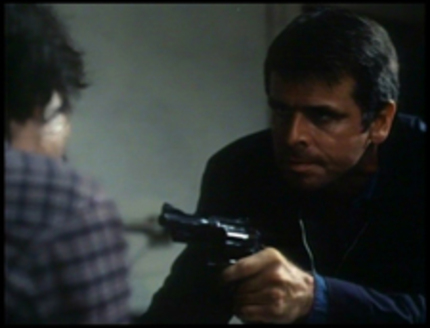 Always quick to feed off real-life tragedy, the film world has only within the last few decades dared to critique with these early responses instead of simply spouting propaganda and waving flags. Wide-spread public dissatisfaction with the war in Vietnam pushed a young, socially-conscious generation of filmmakers toward producing works which reflected the war’s negative impact on all facets of American life while the conflict still festered. When the war “officially” ended in 1975, many soldiers returned to U.S. soil feeling, for the first time, like something other than heroes. It’s this notion that fules the dark engine of John Flynn’s Rolling Thunder (1977), a genuine cult classic that wraps a chilling character study inside the bloody trappings of a revenge thriller.

Returning home to a hero’s welcome in 1973 after a tour of duty extended by a six-year-plus stay inside a POW camp, Major Charles Rane (William Devane) finds himself at odds with civilian life. His wife has moved on, his son doesn’t remember him, and he can’t shake the memories of abuse suffered at the hands of his captors. Awarded a new car and over $2,000 in silver dollar coins – one for each day spent in captivity, Rane floats along in a haze as he succumbs to depression. Robbed in his home by a group of thieves for his new windfall, Rane sees his wife and child shot dead and loses his hand in a grisly torture session involving a garbage disposal. His wrist fitted with a hook he files down to a sharp point, Rane tears through the Southwest with sympathetic barmaid Linda (Linda Haynes) searching for his assailants, eventually joining with fellow POW Vohden (Tommy Lee Jones) to extract bloody vengeance against them in a whorehouse in Juarez, Mexico.

Rolling Thunder is the sort of exploitation picture that’s heavily romanticized – inexplicably unavailable for years, increasingly difficult to track down, populated by young actors and creative talents (like co-scripter Paul Schrader) who’d go on to much bigger things. In Thunder’s case, us fanboys have it right. The film is slow to boil, taking time to humanize its characters for the better part of the first two acts, instilling surprising depth when the inevitable loosing of its grindhouse sensibilities occurs. The violence in Devane and Jones’ otherwise-emotionally vacuous characters is borne from experience. The film shows its central characters coming alive only when what they recognize – whether correct or not – as their way of life is threatened, a mental echo of the rhetoric used since times of old to drum up support for campaigns of war. Thunder’s characters bring the war home with them, in every sense.

Devane has always been a reliable character player, though here he shows himself as strong a lead actor as many from his generation. Rane is a complex creation, and Devane manages to get at something deep within during his interactions with his young son and eventually Linda. Jones has substantially less to do, disappearing for sizable portions of each act, though his catharsis during the final siege at the brothel stands as one of the picture’s more chilling reveals.

Flynn directs with speed and precision, keeping the film’s pace high, never ashamed of its gritty underpinnings. The script (co-authored, along with Schrader, by Heywood Gould) is filled with realistic exchanges and icy existential musings on life and death. Rane repeatedly questions whether he’s dead or alive, lending his drive for vengeance a ghostly tone. The revenge sub-genre often field entries that allow the audience to wallow in the splendor of its characters’ retributive violence (a notion expertly turned on its ear by Gaspar Noe’s Irreversible). While the action in Rolling Thunder (especially the closing shoot-out inside the brothel) is kinetic and involving, it never allows an escape from the hollow results it offers.

Boots culled from VHS (courtesy of Vestron) and laserdisc (Image) abound; if you’re lucky, you can land an original copy in reasonable shape via eBay. Quentin Taratino’s failed releasing imprint took its moniker from Rolling Thunder - too bad it folded before honoring its namesake with a spiffy re-release.

Originally produced by Fox and sold to AIP – then part of Filmways (producers of a litany of television in the 1960s) which eventually merged with Orion, Rolling Thunder now sits with either Sony (who owns most of Orion’s catalog via their purchase of MGM, which acquired a large portion of Orion’s holdings in 1997) or Warner Brothers (which controls a chunk of Orion-held titles produced from the mid-70s to the early ‘80s). After a substantial amount of digging, nothing particularly damning re: rights or print issues were revealed. One is left to wonder why a film so highly regarded by fans and critics alike has yet to land a digital home video release.