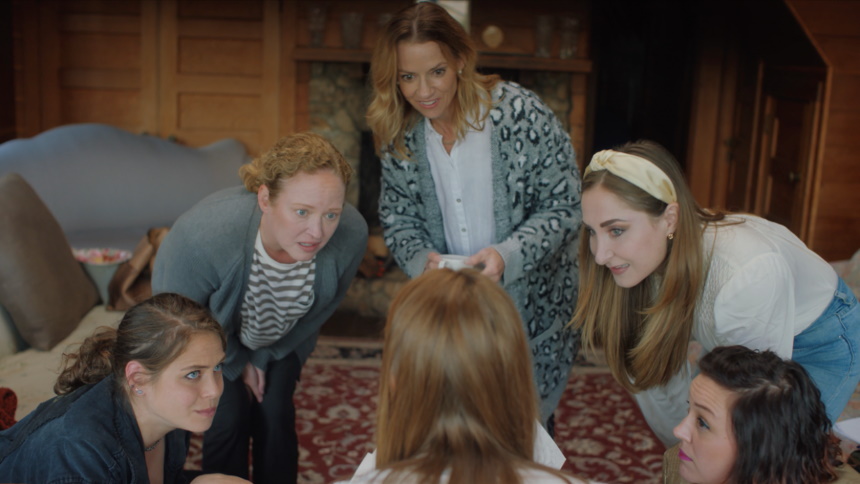 A cozy Alt-Right ladies’ luncheon leads to a horrific sequence of events in Beth de Araújo’s real-time wonder, Soft & Quiet. Already once SXSW’s most divisive features, Soft & Quiet will likely continue to split audiences right down the middle with some really in tune with the vicious tone and others finding the whole experience grueling in a very unpleasant way. Both responses are completely valid in this case, as de Araújo’s film is virtually guaranteed to elicit strong responses from viewers no matter what side of the above-mentioned divide they fall on.

Emily (Stepfanie Estes) is a primary school teacher, after her day at work she heads off to lunch with some like-minded ladies who are concerned about the encroachment of multiculturalism in their rural community. What begins as a spirited discussion of the perceived attacks on their conservative core values by the increasing number of migrant workers in the area quickly devolves into hardcore white supremacist rhetoric as these six ladies – some of whom we’ll discuss momentarily – attempt to find a way to rally others to their cause, perhaps via newsletter.

While the women all seem to be on the same page in general, some are more eager than others to see the current world burn and put in place their own imaginary utopia. Kim (Dana Millican), a liquor store owner, has brought along one of her new employees, Leslie (Olivia Luccardi), a recently released ex-con with a huge chip on her shoulder. Rounding out the main quartet is Marjorie (Eleanore Pienta), a rather milquetoast young woman whose initial trepidation about the whole thing quickly melts away when this sinister sisterhood puts themselves in a position that will alter not only their lives, but those around them forever.

These events, best left to those brave enough to experience the film for themselves, unfold in real-time, when a surprise confrontation turns very ugly at Kim’s store. What follows is a grueling, blow-by-blow account of a crime almost too brutal to endure as a viewer. This is where the audience begins to split. Writer/director De Araújo does not flinch in her depiction of the savage depths to which these women will descend in the name of defending their genetic purity.

It’s horrifying to watch, and a lot of eventual home viewers will definitely just walk away somewhere in the first 40 minutes, and though I’m typically a proponent of sitting through a film before declaring an opinion, I can’t say I’d blame anyone for making that decision. Soft & Quiet is a study in watching people commit heinous acts in the name of a belief that might not have occurred if that belief were slightly downgraded to just an idea. The worst acts and atrocities ever committed by humankind were in the names of beliefs, and this one is no less savage because of its smaller focus, perhaps it’s even more so because it is undiluted.

Soft & Quiet doesn’t coddle its viewers, it plays out like a choose your own adventure story where the characters are constantly given the choice to just walk away. Don’t do the thing that you know is wrong and hurtful. At every crossroads, they dig themselves deeper, dehumanizing, victimizing, betraying their own humanity in the name of a belief. It’s horrible, but its not unrealistic, and that’s the real terror here.

Hate crimes happen in every country in the world, every day of the week. Soft & Quiet attempts to place those events into a new context, by not only following the villains and their entire thought process from beginning to violent, shocking end, but also by creating villains that don’t fit the common profile. By focusing on otherwise unthreatening white women as the perpetrators of these acts and never betraying that identity in terms of making them act in a way you wouldn’t imagine them acting, it displays the very slippery slope that could lead – and has lead – to a vicious act like the one portrayed here.

De Araújo is counting on the film wrenching your stomach, if it didn’t it would certainly say more about the viewer than the film. She makes us all complicit in the violence through the mere act of watching, not quite in a meta a way as something like Funny Games, but walking us through every sickening minute from ladies who lunch all the way to the ghastly climax creates and unwelcome bond with these women. I suppose part of this is to show how close any of us might be to making a decision that might change our lives forever, but it’s also a way of externalizing the kind of violence that people commit against each other every day in small ways.

Once the veneer of civility fades in the first twenty minutes of Soft & Quiet, it truly becomes something to behold. What begins in the daylight of late afternoon becomes gradually darker, both literally and metaphorically, as the evening creeps in. It’s a thoroughly uncomfortable experience, one guaranteed to make the audience’s skin crawl as things move from bad to worse in real time, and what the viewer takes from it will be predicated on their willingness to sit in that discomfort. Not everyone will be up for it, and that’s okay, but for those whose constitutions crave a challenge, this film is essential.

Do you feel this content is inappropriate or infringes upon your rights? Click here to report it, or see our DMCA policy.
Beth de AraújoOlivia LuccardiJon BeaversStefanie EstesDramaHorrorMystery