Miami 2022 Review: THE ART OF MAKING IT, The Code of the Art World 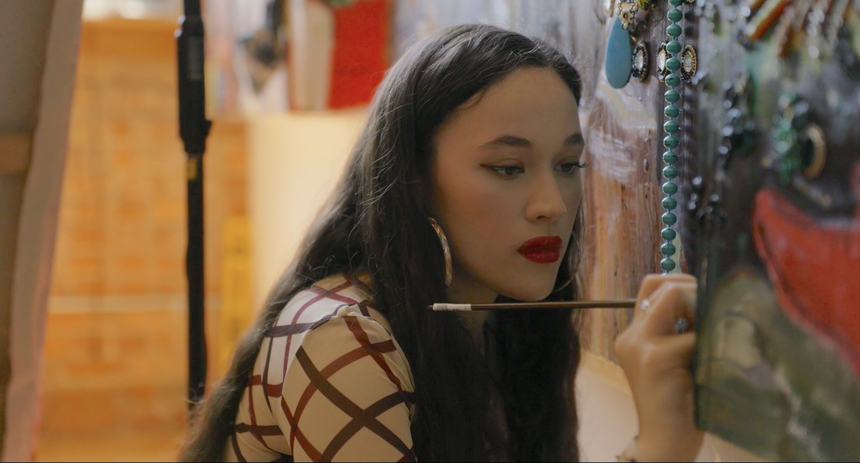 Like I suspect a lot of people, I have a few original art pieces, but not too many; sadly the price tag of much art work vastly outnumbers my income. But then, a piece of art is (usually) unique, and takes a long time to create. The artist should get the money earned for their labour. Sadly, the reality is (and like a lot of art forms) there are more people practicing it than whose work ever reaches the public eye, and a lot of gatekeeping keeps the art world, and who gets the money, complicated.

Documentarian Kelcey Edwards' feature debut takes an honest and open look at the art world, its movers and shakers, the dealers, curators and critics, and the people too often at the bottom who just want to share their creativity with the world: the artists themselves. If you're someone like me who loves art but knows little about it, it's an insightful look at how the art world parallels the politics and money issues of other art forms as well as having its own unique tribulations and joys.

The introduction gives us a sampling of what the film will cover: the role of museums, the place for art school and the crushing debt accumulated through attendance, who controls what gets seen and valued. And of course, the artists, often 'famous and poor at the same time'. All the speakers are united in their love for visual art, and many of them united in their exacerbation at how the staggering amounts of money that art can garner has made it a rich person's playground.

One of the first scenes shows art collector and dealer Stefan Simchowitz at an art fair, one of the big mover and shakers in the various rooms - to some, he's a menace, buying artwork then flipping it for a profit. To others, himself included, he's getting artwork out into the world. Given the price tag of paintings and sculptures, it's no wonder that the art world - with a code of its own - is unregulated and attracts those with money, and the power to control what gets bought and sold. Edwards is able to get very frank dialogue with many of these dealers and gallery owners, from places such as Pace - well, perhaps some more forthright than others. After all, if it's the rich who decide what has value, they are the ones deciding which art work will survive to the next generation - we've be able to preserve a lot of amazing art, but what have we lost, if the rich of previous years or centuries didn't like someone's work?

Curators have a role in promoting and preserving art as well, and unlike many other countries, the USA gives very little financial support to art institutions. That leaves curators at the mercy of benefactors, who, again, get to have a say in whose voices are seen and preserved. The dominance of art by white men is hardly a surprising coincidence. One of Edwards' most interesting interviews is with artist Jerry Gogosian, the pseudonym of Hilde Lynn Helphenstein, now exposed and known for her clever memes that skewer the art world, who makes a point of how she's been treated as a woman - her use of memes is seen as a cry for attention as opposed to legitimate pop art.

It's the artists themselves who provide the most poignant insight and dialogue - these are their creations, after all, and more than anything, they want to world to see their art, and make a reasonable living from it. People like Gisela McDaniel, whose work delves into her own experience of sexual violence; Chris Watts, who works three bartender jobs while making paintings on the African-American experience; and Jenna Gribbon, one of the view to have a major gallery showing and might be able to just live off her art. What does it mean to give so much of yourself, your time and being, to a work of art, and still not have enough money to pay the bills? Why does too much of the money end up in the dealer's pocket? That is, if your work is seen at all.

The internet has made a difference - a lot of artists now can have more direct contact with potential buyers via their own websites or social media platforms. Edwards covers a lot of ground, moving from one topic to the next seamlessly, letting each story connect with the web of the art world and how it's all increasingly precarious. The Art of Making It is a timely overview of an industry in flux, with artists caught in the maelstrom.

The Art of Making It