The Original Jackass Crew Returns For One Last (?) Ride 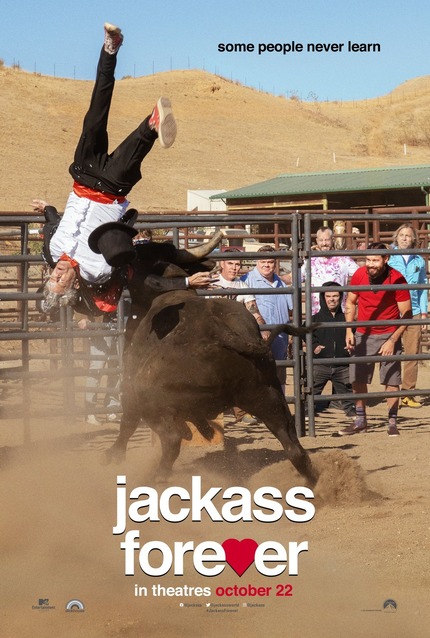 I’m going to be completely honest here: I don’t know why I’m writing this.

Jackass is an American institution, the kind of singular cultural artifact that is immune to film criticism, almost universally either loved or hated, before you walk in the theater you know exactly what you’re going to get. It is kind of impossible to try to explain the appeal of the Jackass phenomenon, it’s such a visceral, instinctual, stupid thing to even debate.

Yet here we are, 22 years later. Nothing has changed and everything has changed. The world is a dramatically different place. We are more aware of our surroundings, more careful with our words, when we see something, we say something. Surely, with all of the evolution we as a society have undergone over the last two decades, something as aggressively stupid as watching a man getting smacked in the genitals with a spring-loaded flip flop is beneath us.

Nope. It’s not, and Jackass Forever proves that there is no low to which the humor can stoop that will not still make its core audience double over in uncontrollable laughter. I am that audience. Thank heavens for Jackass Forever, it is the balm we need in these trying times.

The original crew steps up to the plate, presumably for one last hurrah in Jackass Forever, bringing with them a younger generation inspired by their adolescent pranks to perhaps take the series – perhaps the most consistently entertaining franchise of all time – into the future. With lead morons Johnny Knoxville, Steve-O, Preston Lacy, Wee Man, Danger Ehren, Dave England, and Chris Pontius all at or near 50, it was only a matter of time before they needed to freshen up the crew, but these morons wanted to prove that they still have it, and boy howdy, do they ever.

It would be the expected route for Jackass to slow down a bit all these years later, but all it has really done is grow the budget and audience for these ridiculous pranks. What was once the domain of backyard skater prank videos is now a multi-million dollar operation with huge stunts, elaborate set design, and what must be an ungodly insurance line item to even get this thing started; and yet it all still has the feel of a bunch of drunk friends playing Truth or Dare, with the only acceptable answer being Dare.

Going into Jackass Forever, I will admit to having been a bit trepidatious about what I was going to get. I’m a long-time fanatic of the films, and the ages of these men, along with the changing of the culture, the addition of POC and a woman to the crew (we’ll get to that later) made me think that perhaps they’d hedge their bets a little. I mean, surely the appeal of self-inflicted genital trauma wanes once one hits middle age. But no. No dick is safe in Jackass Forever, perhaps they are even more unsafe than in any previous film. Dick and ball trauma, puke, poop, vicious animals, Three Stooges-style physical comedy, and oh so much pain are all on the menu in this latest film, and it just feels right.

From the opening title sequence, always a big-budget highlight of the films, it’s clear that Jackass Forever does not intend to rest on its laurels. It’s one of the biggest they’ve ever done, and ridiculously funny to boot. I have no intention of listing any of the specific pranks, that would spoil the surprise, even if reading about them in no way prepares one for seeing them unfold before one’s eyes but trust me when I say that the crew lives up to its name, and Knoxville once again earns his reputation as a savant of stupidity in service of entertainment.

The new members of the crew, Sean “Poopies” McInerny, Zach Holmes, the team’s first black members Jasper Dolphin and Eric Manaka, and the first woman, Rachel Wolfson, are all game for the shenanigans and have their own strengths to add to the team. They are integrated well into the fold, even though it’s very clear who the alphas are in this pack. While it’s clear that they are very eager to get on the same level as the originals, Poopies and Zach are the only two who seem close to willing to endure the physical punishment that has become one of the series’ signatures. The rest are very engaged in the more psychological elements of the pranking and very fun to watch on their own, but they will need to step it up if they truly plan on keeping this flame alive. There’s a spark there, but Jackass is a raging fire, and I’d hate for that to fizzle.

Fear not, though, I came here not to bury Jackass, but to praise it.

It’s been a long road, over a decade since the last film. In the interim the crew lost Ryan Dunn to a tragic auto accident and Bam Margera to increasingly erratic and concerning personal behavior, but there’s no doubt that what remains is a team of characters who very much love each other and wouldn’t rather be anywhere else. It definitely shows, they torture each other mercilessly, but always end with a big hug, it’s an aspirational kind of love, if you really think about it, a kind of male camaraderie we don’t see much in media, and it’s not even scripted. Who would’ve thought a group of men who spend their lives thinking of ways to hurt one another would end up inspiring us to be better together?

Knoxville has stated that this is his Jackass swan song, and if that’s true, it’s a sad thing, but it is also the kind of series and concept that could potentially go on forever, as the title says. Ever since the first caveman got bonked on the head by a falling rock and his cave-buddy laughed, humans have enjoyed the misfortune of others. Jackass Forever is more than a film, it’s a mantra, a way of life, and a pledge that I hope to God stays true for all the days of my life. Thank you, you fucking idiots, for existing in the same slice of an infinite history as we do. We don’t deserve you.

Do you feel this content is inappropriate or infringes upon your rights? Click here to report it, or see our DMCA policy.
Jeff TremaineJason 'Wee Man' AcuñaEric AndréDerrick BecklesJohnny KnoxvilleSteve-OChris PontiusDocumentaryActionComedy