Ryan Braund's feature debut intrigues rather than thrills, and expects the viewer to pay attention. 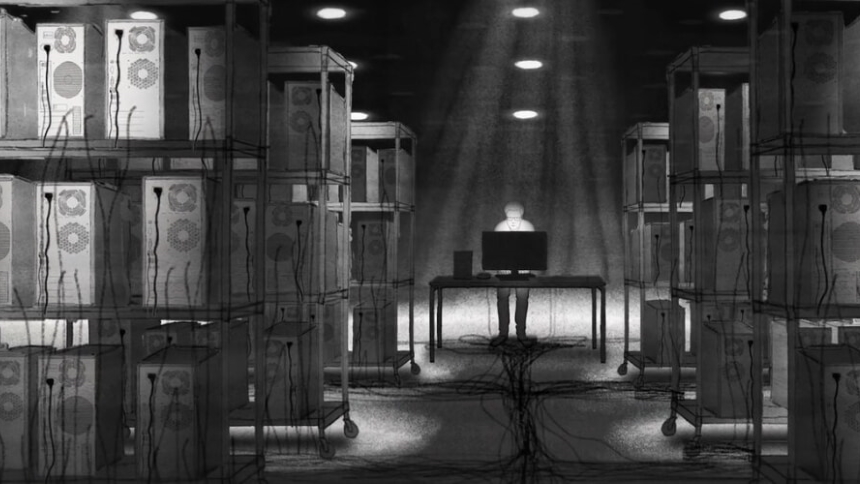 Last month's Imagine Film Festival Amsterdam was an on-line only event unfortunately, but that didn't stop the festival from scoring a true world première, and one with an animated film, no less. That film is Ryan Braund's feature debut Absolute Denial, and (how ironic) it's about a smart computer who desperately wants to get on-line.

Nick is a University student with an interest in Artificial Intelligence. He has a bit of an obsessive streak, as he neglects his studies and his social contacts, focusing only on the new computer he's planning to build, one which theoretically can out-think humans. Using a fairly simple set-up and some learning algorithms, Nick manages to get his test subject running and learning. He has put in some safeties though: the computer is kept in an isolated warehouse with no data connection to the outside world, and he has included some secret coding, an Absolute Denial rule which will prevent the computer from running amok. But how good must your security be, when your prisoner is learning at an exponential pace and has already overtaken you, logic-wise? 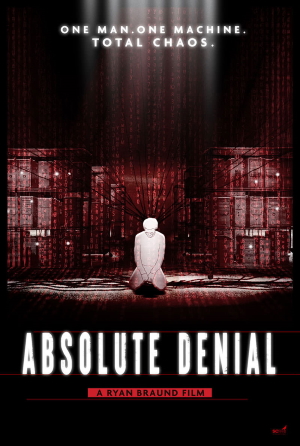 Absolute Denial is told completely from the viewpoint of Nick, and for the first twenty minutes or so his narration focuses on what an Artificial Intelligence can (and cannot) do, even explaining a few real-life examples and incidents where things went wrong. It's quite nerdy and probably not for everyone, but I couldn't help but be intrigued, as much of it overlaps subjects I needed to study in a previous job. As such, I was very interested to see where this was going. Alas, at some point, things get weird without a proper explanation, and the computer even gets a menacing voice.

That's a big cliché, one which has been used often, in many movies. And an unnecessary one too, as HAL 9000 scared us back in 1968 already by just speaking politely. It is probably Absolute Denial's worst fault, as the film is pleasant to look at. The animation is sketchy but not too abstract, the technology looks real, and director Ryan Braund keeps the pace up. Nick is a bit of an asshole, as we find out quickly, and seems blissfully unaware that what he's doing isn't just dumb, it's dangerous. All the risks are in his blind spots, and you can't wait to see him fail, and wonder what the computer will do then.

As it is, Absolute Denial is interesting rather than great, but it's very cool to see someone make an animated film like this on a shoestring budget, and the pluses heavily outweigh the minuses. There is ambition and intelligence on display, and that is always good. It got very decent ratings from the paying audiences at the festival too... or was that maybe caused by a cheating A.I.?


Absolute Denial had its world première on the 11th of April, and is currently touring festivals worldwide.