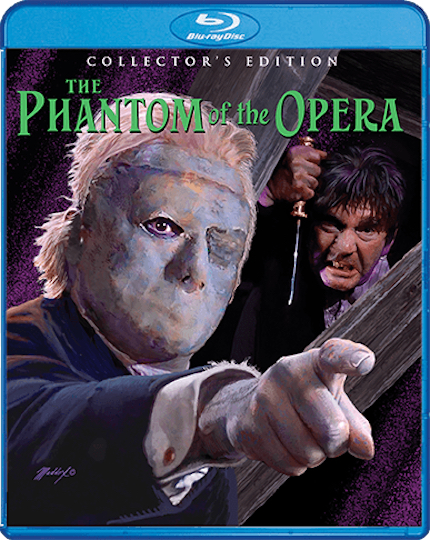 Scream Factory's Hammer Films collection just keeps growing! New this week from the label comes the 1962 version of The Phantom of the Opera.

Directed by one of Hammer's better-known directors, Terence Fischer (The Curse of Frankenstein, Horror of Dracula), this iteration of the classic tale stars the great Herbert Lom (El Cid, Spartacus, Mysterious Island, The Dead Zone) as the Phantom and Professor Petrie.

Also onboard are Heather Sears (Room at the Top, Four Desperate Men) as Christine, and Hammer alums Edward de Souza (The Spy Who Loved Me, The Golden Compass) as kindly opera producer Harry and Michael Gough (Tim Burton's Batman and Sleepy Hollow, Horror of Dracula) as the lecherous opera owner Lord Ambrose d'Arcy.

You all know the Gaston Leroux story: young ingenue opera singer Christine replaces the lead after she's scared off by creepy events. In this version, said events aren't caused by the Phantom terrorizing everyone, but by his sidekick, a mute hunchback. That's because the role was originally meant to star Hollywood titan Cary Grant, who wanted a more sympathetic Phantom. Grant still reclined the role, and it went to the prolific Lom, who's pretty much great in anything.

Another departure from the core story is that this version of The Phantom of the Opera is set i London, which likely saved quite a bit of money. Also, Christine must dodge the advances of the villianous Lord Ambrose d'Arcy, who operates his opera like a Hollywood casting couch. She's saved by Harry, but they both get fired for standing up to d'Arcy. A few hours later, he also fires his conductor, and the rest of the cast walk off, as well. Since he now has NO opera without anyone, d'Arcy is forced to welcome everyone back.

But the happiness doesn't last long. Strange going-ons threaten to derail the production, especially when Christine is kidnapped. Harry sets out to find her and winds up in the sewers below the opera house where he finds the disfigured Phantom/Professor Petrie, his mute and mischevious criminal sidekick, and Christine, exhausted from not just being held against her will in a corseted dress, but also from taking forced singing lessons from a meglomaniac.

In a long flashback shot entirely in Dutch angles, we see how the put-upon Professor Petrie became the Phantom, and it's all the dastardly Lord d'Arcy's fault, of course. Christine and Harry take pity upon the Professor, and they nicely work together to make the production a success. But like most horror films, especially older ones, the Professor has gone too far in his vengeance and does not survive.

This fun, gothic production of The Phantom of the Opera was notable for Hammer due to the sheer opulence of its sets and amazing production design. It wasn't long after the film came out that the studio had to start drastically scaling back its budgets.

[A side note: The Phantom of the Opera writer and Hammer Films producer Anthony Hinds was also  a writer on Godzilla Vs. Wolfman, which is apparently a Japanese fan film made by Toho filmmakers, and considered lost. There are a few reconstructions of the film floating around on the Internet, however.]

The image looks absolutely wonderful from a new 2K scan, with beautiful, vivid colors and rich dark tones. The sound is also great, and the film comes in two different aspect ratios. There are some new documentary featurettes here as well, which shed light on the history of Hammer, in addition to their adaptation of The Phantom of the Opera. One of the special features has supporting actor De Souza, who also narrates. I especially enjoyed the interview with novelist and screenwriter Courtney Joyner on the relationship he developed with Lom.

This Collector's Edition Blu-ray is a win for Hammer afficionados. It's due out next week, on August 11th. Pre-orders come with a poster of the cover art, while supplies last. To add Scream Factory's Blu-ray release of The Phantom of the Opera to your collection, head over their website here.

The Phantom of the Opera