Review: THE AERONAUTS, Come Fly with Felicity and Eddie 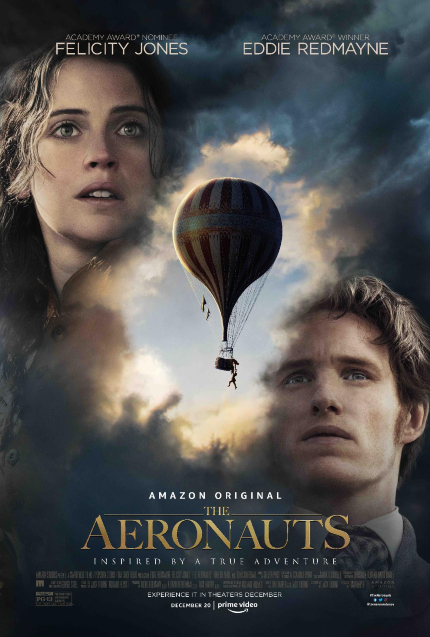 Originally released in 1958, "Come Fly with Me," sung by Frank Sinatra, kept running through my head as I was watching this movie.

The Aeronauts
The film will open in U.S. theaters on Friday, December 6, 2019, via Amazon Studios.

Fine for what it is, The Aeronauts revolves around an obsessed scientist (Eddie Redmayne) who convinces a grieving widow (Felicity Jones) to pilot his balloon higher than a balloon has ever flown before.

That's not only the gist of the film, it's also the primary reason to see it. Redmayne and Jones displayed believable, winning chemistry in The Theory of Everything as a couple who overcome unbelievable odds in order to achieve great things. Both were nominated for Academy Awards and Redmayne walked away with an Oscar for his performance as the legendary Stephen Hawking.

Now the roles are reversed, as it were, with Jones dealing with a ton of emotional baggage as Amelia Wren, who watched her husband plummet to his death from a hot-air balloon a few years before The Aeronauts proper begins. Redmayne portrays James Glaisher, a meteorologist before there was such a thing, who wants to fly higher and higher, not for his own glory, but so he can take measurements that have never been taken before, which he is convinced will help him to forecast dangerous weather conditions better than has ever done before, and possibly save lives as a result.

The planned journey is high-minded and noble in intent, which is probably why Glaisher has difficulty finding an aeronaut ("pilot or navigator of a lighter-than-air craft, such as a balloon," according to one source) who might be willing to take such a huge risk for what sounds like a flight of fancy. He soon comes to appreciate that Wren has the talent and abilities, so then it's a matter of convincing.

Jack Thorne (Wonder, Glue, His Dark Materials) wrote the screenplay and structures the tale with the goal of maximizing the impact and tension. Obviously, we know that the scientist and the widow will end up in the balloon, so that's where the film proper begins, as they prepare to launch. The narrative then bounces between the trip and the events that led up to it, with the idea that developing the characters in such as manner will create greater interest in their fate(s).

Jones and Redmayne are superb actors, as they have both shown time and time again, yet both struggle somewhat with the schematic nature of the film. They inspire as much empathy as possible, given their thespian talents, but the bigger challenge is the characters themselves, and the basic premise.

What almost saves the film -- and definitely makes it a priority for seeing on the big screen, if you can manage that before it heads to Amazon's streaming service on December 20 -- is the magnificent scenery. Of course, we know in our heads and in our hearts that Jones and Redmayne did not fly to the heights of the heavens in a hot-air balloon; their survival is not in peril, and, frankly, the scientist and the widow do not appear to be terribly complex people.

Even so, the combination of the premise, the spectacular scenery (whether created by computer imagery or not), and two top-notch actors sell the film as well as it can be sold.

Summing up: As he also showed with Wild Rose earlier this year, director Tom Harper is skilled at creating an atmosphere and guiding performances to their maximum potential, even on a fanciful flight into the (now) known.

Do you feel this content is inappropriate or infringes upon your rights? Click here to report it, or see our DMCA policy.
Amazon StudiosEddie RedmayneFelicity JonesTom Harper