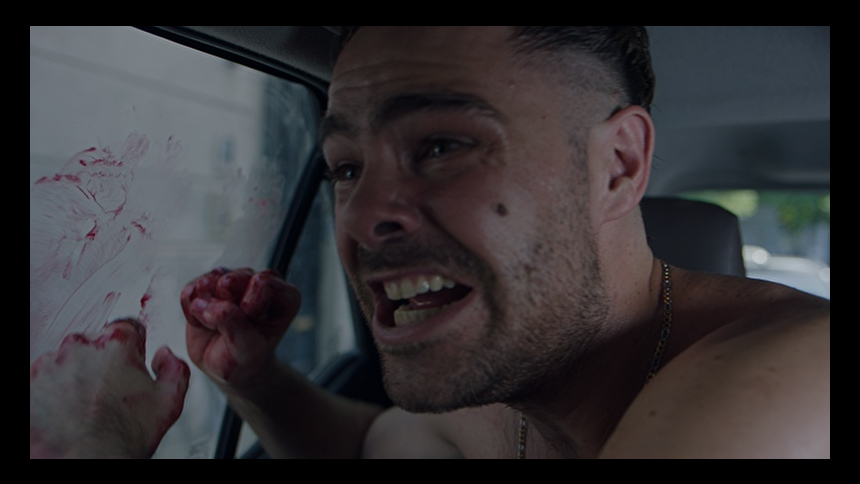 Automobile owners will rejoice! Car thieves, not so much.

The nerve of some people!

In the middle of the day, on a quiet street in urban Argentina choked with security cameras and 'neighborhood watch' signs, a brazen young man breaks into a shiny, brand-new 4X4 vehicle, rips out the deluxe audio system, rifles through the glove compartment, laughingly urinates into the back seats (?!!!!), and then finds he cannot get out.

Aha! Gotcha, punk! Hapless victims of crime the world over will likely feel a touch of empowerment; I know I certainly did.

The criminal (Peter Lanzani) tries everything, but cannot open the doors or the windows from what has become a locked cell. As he soon realizes, the windows are polarized and bulletproof, the interior is soundproof, and the suspension has been disabled, so all his fussing and fuming fails to attract the attention of passersby.

Even his cell phone is of no use, since the battery dies. In desperation, he struggles to dismantle the doors, to no avail. His anger boils over, which only makes him more aware of his own increasing thirst. How can he possibly escape this diabolical dilemma?

Then the automobile's hands-free mobile phone rings. The caller is identified: "Yo." (?!!!!)

Eventually, we learn more about the circumstances that have enveloped the criminal, as well as the owner of the titular vehicle and his motivations. Mariano Cohn directed; I've not seen his trio of previous features -- The Distinguished Citizen (2016), The Man Next Door (2009), The Artist (2008) -- nor his documentaries and shorts, but his work here is quite good. The script encompasses elements of black humor to accompany the imaginative action, which is tightly contained within the vehicle. Yet it is not exhaustively claustrophobic, since it also provides a perspective of the street itself, and how ordinary citizens live their lives in such a customary routine that it can leave them open to victimization by those with criminal intent.

Trust also that director Cohn has broader social issues in mind, which are played out in equally contained fashion. Thus, we end up with a dark thriller that has a social conscience as well as a welcome, questioning angle that truly illuminates what might otherwise be dismissed as mere entertainment.

Do you feel this content is inappropriate or infringes upon your rights? Click here to report it, or see our DMCA policy.
ArgentinaDady BrievaFantastic Fest 2019Luis BrandoniMariano CohnPeter Lanzani