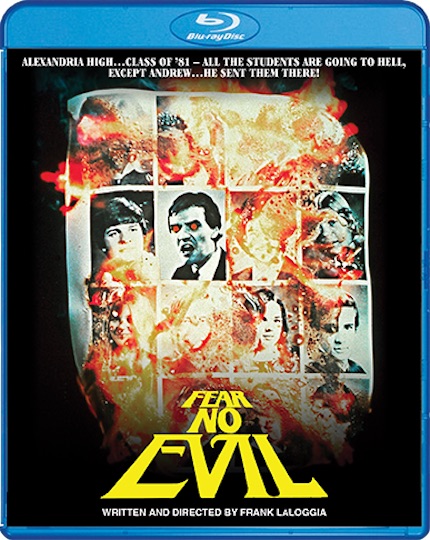 Coming up next week here in North America, Shout Factory's horror imprint Scream Factory is releasing a Blu-ray edition of the weirdo 1981 film, Fear No Evil.

This no-budget shocker was directed by filmmaker and actor Frank LaLoggia (Lady in White, Mother) and even won a Saturn Award in 1982 for best low budget film.

Here are a few of the taglines: I found the second one pretty funny:

"Meet Andrew. The Road to Hell is paved with his Victims."
"Alexandria High... class of '81 - All the students are going to Hell, except Andrew... he sent them there!"

The plot is pretty simple, though a bit convoluted at the same time, if that makes sense: Andew Williams is a gangly high school student with more than enough issues to deal with, including being Lucifer on Earth himself. Apparently, some of the Archangels had previously killed Lucifer (that can happen?), and then he sort of reincarnates himself in this shy, smart high school boy --- because of course he does.

And then Andrew discovers he's Satan, and all Hell breaks loose. I... couldn't help myself. This film is sometimes really fun, but drags in other spots, and the old-school visual effects were a retro treat. I can't say that Fear No Evil scared me one lick, but it's an interesting time warp of a flick.

The new 4K scan looks decent and the audio tracks sound fine. There are a few interviews on here, and I found the one with special effects artist John Eggett to be the most interesting.

If you're a fan of retro horror or religious horror in a sort of an anthropological way, definitely check Fear No Evil out. I can't really recommend it much beyond that, unfortunately; it's a one-and-done watch for me.

If you'd like to watch the trailer for Fear No Evil or add this disc to your weirdo collection, head over to Shout Factory's page for the film here.