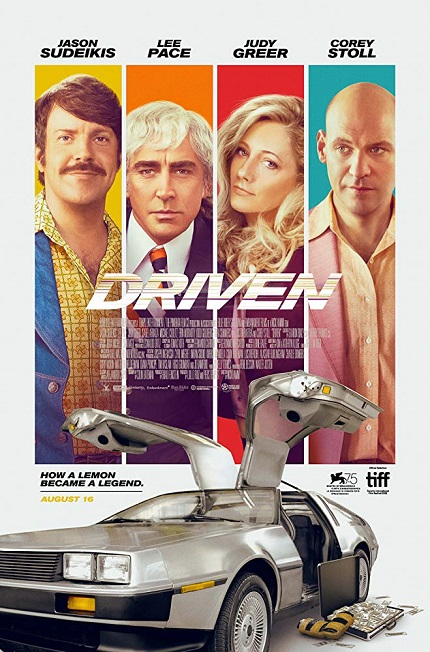 John DeLorean was an important figure in the automotive industry, a visionary engineer and designer, the man behind the inmortal DeLorean time machine. But what some people don’t know is that he was also involved in an FBI sting operation involving drugs in the early 80s. Driven is a recreation of said events.

DeLorean (Lee Pace) is actually a supporting player here; the story is told from the point of view of Jim Hoffman (Jason Sudeikis), his next door neighbor, a pilot and drug runner -- he’s basically a nerdier Barry Seal -- who entrapped the auto executive in a makeshift drug deal in order to avoid jail time after being arrested by the FBI. DeLorean saw the sale of cocaine as a quick means to raise funds for his business venture, which was in danger of going under at the time.

Director Nick Hamm and screenwriter Colin Bateman take this story and turn it into a hip, stylish crime saga, in the same vein as films like Blow and American Made, to name a few. That means a quick pace, a lot of 70s-80s tunes, appropriate fashions to match, and a little bit of dark humor coming to the rescue whenever things start getting too serious.

At the center of this story is the sort-of bromance that blooms between the shifty, fast-talking Hoffman and the cool, suave DeLorean; a friendship that probably never was, with the former pilot resorting to lying and backstabbing to save his own ass and the auto magnate clearly needing someone looking up to him in order to boost his own self-confidence.

Both actors make a watchable pair; Sudeikis is well known for his ability to play annoying douchebags you want to punch in the face, and he puts that to good use as Hoffman. Thankfully, his growth as an actor means that he eventually tones down the smarm and finds some humanity; Hoffman wants to do right by his family, but botches it at every turn.

Pace, sporting a Richard Gere hairdo, is a picture of effortless cool as DeLorean, at least until things don’t start working out, his ego gets in the way and the cracks in his perfect life begin to show. The cast is rounded out by the always dependable Judy Greer as Hoffman’s long-suffering wife, who gets a real cathartic moment that grounds a film which until then had been just a story about bad guys doing bad things but looking cool while doing it; Corey Stoll as the hard-ass FBI agent who has to deal with Hoffman’s neverending stream of bullshit; and Michael Cudlitz and Erin Moriarty as a drug dealing couple who get roped into the whole mess.

It’s likely that Hamm and Bateman took liberties with the true story; after it all ends, you’d think DeLorean and Hoffmann wouldn’t want to see each other ever again, and it’s also likely their bromance wasn’t as inmediate and friendly as portrayed here; why a rich auto exec would pal around with a social climbing bottom feeder is an obvious question. But, like they say, never let the facts get in the way of a good story. Driven has a pretty good one, and it tells it in a fast-paced, entertaining way.

Driven is now in theaters and on Digital/Demand.