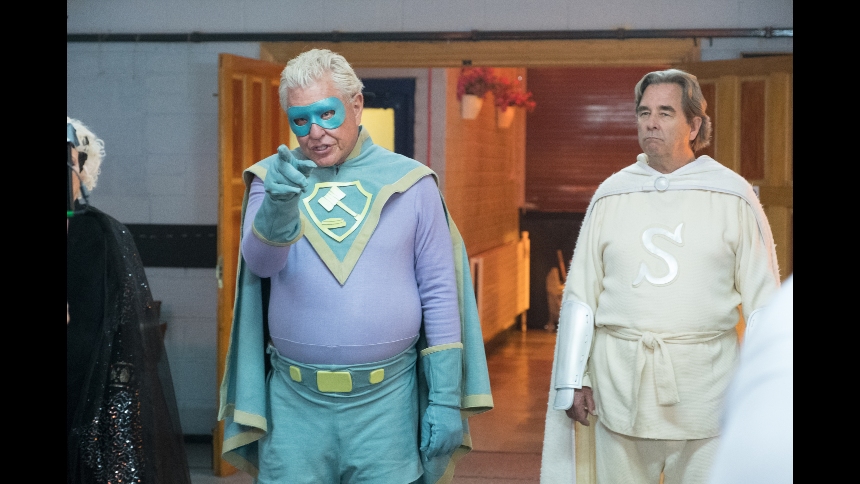 Perhaps because I am now *cough cough* years of age, I can easily relate to the idea that life appears to pass by in a whirl when your bones start to creak, even while your mind is still entirely engaged. Here's the film's official synopsis:

"Supervized tells the story of an elderly group of international superheroes retired to Dunmanor nursing home in Ireland."

"Ray is the once world renowned 'Maximum Justice' who as his nom de plume suggests will fight bad with good till the cows come home. He finds it hard to accept that his hero days are over and now it's bingo games and blanket baths."

"His old team consisting of trusted sidekick Ted AKA 'Shimmy', old flame Madera 'Moonlight' and rival at everything Pendle 'Total Thunder' are far more accepting of their indignant destiny. When Jerry, 'Rainbow Warrior,' dies after having his superpowers 'downwardly managed' for the safety of others, a federation-sectioned procedure, Ray suspects foul play and decides to investigate. The rest of the gang are not so convinced, and Ray finds himself battling against not only his enemies, but the stigma and restrictions of old age."

Alright, I believe all of us face "stigma and restrictions," no matter our age, which makes Supervized something that we can all understand. Elya Baskin and Fiona Glascott also star in the comedy. Steve Barron directed from a screenplay by Andy Briggs and John Niven.

The film is now in theaters and on VOD via Freestyle Releasing. Watch the clip below; turn the volume UP if you're like me and could use a little help.

Do you feel this content is inappropriate or infringes upon your rights? Click here to report it, or see our DMCA policy.
Beau BridgesFionnula FlanaganLouis Gossett JrSteve BarronTom Berenger