Blu-ray Review: MIA AND THE WHITE LION, Born in Captivity

A young woman becomes friends with a lion in an animal-powered drama. 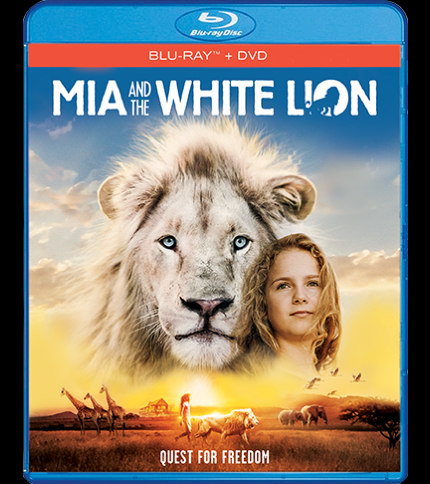 Mia and the White Lion
Now available on Blu-ray/DVD from Shout Factory.

Watch an interview before the movie -- that's a suggestion I've never given before.

In an interview included on Shout! Factory's excellent new Blu-ray, out this week, veteran filmmaker Gilles de Maistre explains he visited a lion farm in South Africa and was impressed by the efforts made to breed and raise lions in safe captivity, to be sold in time to zoos and animals preserves.

It was only after leaving the lion farm that he was informed by locals that the animal farm only sold the animals to professional hunters, who could then kill the lions in safety, claim trophies, and proclaim themselves great white hunters.

Watching the interview after watching the movie, as I did, calmed some of my concerns about Mia and the White Lion, which make me feel distinctly uneasy throughout its running time.

Filmed over a three-year period, thus allowing the main characters to grow close to one another in the only way possible, de Maistre's dramatization, inspired by his true experience, follows 11-year-old Mia (Daniah De Villiers) as she moves with her older brother Mick (Ryan MacLennan) and parents from London to South Africa. (De Villiers and her family moved to South Africa for the duration of the filming.) Her father, John (Langley Kirkwood), is a South African native, and her mother, Alice (Mélanie Laurent), has agreed to return to the land where they met, married, and started their family.

Mia, the youngest, is not happy about their decision, even though she now lives on an absolutely gorgeous farm, filled with a collection of caged animals. Her father assumed ownership of the property upon the death of his father, and he is determined to make the farm a success. Perhaps as a result, or perhaps because he's always been a stern, non-demonstrative type of person, he doesn't have much patience for Mia's actively unhappy behavior.

One day, her father introduces Mia to a new lion cub, a rare white lion. Pappa figures the white lion will help to draw tourists to the farm and thus play a vital role in making the animal farm sustainable. For her part, Mia is initially resistant to the playful charms of the cub, but naturally she soon falls in love with Charlie, as she calls him, and he becomes her best friend. (She's had little success in developing any new human friendships.)

As we might expect, pappa's financial interests and Mia's growing protectiveness of her best friend bring them into continual conflict, and even Mia's mother finds it difficult to see past the scars that Mia accumulates from her perilously close contact with Charlie as he grows to adulthood.

Even though the film is inspired by a true story, as related by director de Maistre, and the reality is that the young actors spent several years being trained by Kevin Richardson (aka The Lion Whisperer) so that their encounters with the lions were filmed in safe conditions, I was left with questions that, I suppose, only experts on animal conservation can answer. Some of those questions are eventually addressed in the third act of the film, which may suffice for now.

In addition, I wondered why, in a country where white people make up only about 10% of the population in South Africa, a broader view of the country and its interests was not represented. The only Black South African that I noticed in the supporting cast is a household worker who principally serves as comic relief.

The Blu-ray from Shout! Studios looks very lovely indeed. Special Features include interviews, featurettes, deleted scenes, casting footage, theatrical trailer, and image gallery. One of the deleted scenes, by the way, includes a very brief moment with the household worker in which she easily solves a problem. A DVD comes along in the Blu-ray package.

Summing up: Nicely shot drama, for the lion-lover in all of us.

Do you feel this content is inappropriate or infringes upon your rights? Click here to report it, or see our DMCA policy.
Daniah De VilliersGilles de MaistreLangley KirkwoodMélanie LaurentRyan MacLennanShout Factory