Blu-ray Review: When We Stare Into The Abyss, FUNNY GAMES Stares Back 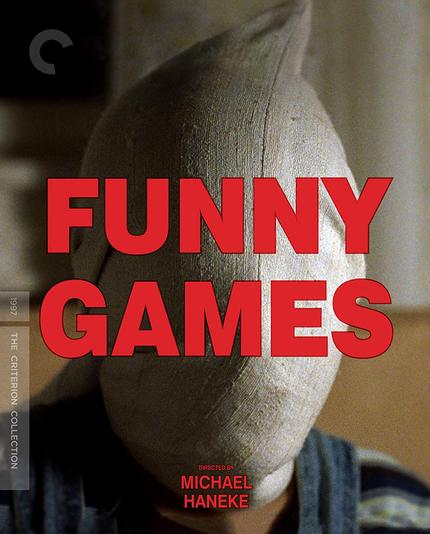 In Michael Haneke's Funny Games, a pair of teenage boys in tennis clothes appear at the gate of a German family's country home and make themselves at home. What follows is an hour and a half of some of the most gruesome psychological horror ever committed to film. The boys take to torture like fishes to water, turning this mother, father, and son into their own personal toys with a kind of cold demeanor that makes their actions feel all the more cruel.

However, as much as this film is designed to disgust and shock the audience, it is almost never about what the boys are doing to this poor family, it's about our complicity in the act of consuming torture for entertainment. As these two nameless provocateurs act out their own violent fantasies, we wonder to ourselves why they are doing it. That's often the thought that runs through a viewer's mind in this type of film, and it is the filmmaker's job to reveal the motives of the perpetrators. Or at least it was until Funny Games split Cannes audiences when it premiered there back in 1997.

Through all of violence, we try to piece together some kind of logic, because that's what we've been trained as an audience to do. Then, with one knowing glance and a wink toward the camera as one of the victims attempts to escape, a horrible reality sets in for the viewer. Haneke is doing this for us, and we are begging for it.

Funny Games is an indictment of a public who craves violence as entertainment. With that wink, Haneke lets us know that we are the reason for this torture, it's a show, and with the acknowledgment that it knows we're watching, every moment past this point we become accomplices in the torture of this family. We may not be the ones torturing and killing this family, but we are complicit in their pain because we can't, won't, and don't want to look away. Funny Games isn't a film about these characters, it's a film about you and me.

Michael Haneke has never been one to shy away from putting the audience in a defensive position, but with Funny Games he proved his ongoing hypothesis that we will participate in any amount of torture if we find it entertaining and can remove ourselves from it emotionally. It's like a video game, we aren't actually controlling either side of the violence, but by staying with the film, we are enabling and encouraging it.

I have to admit, there's something primitive in me that wants to see where the action goes, and even as the violence and psychological torture become increasingly hard to watch, I cannot look away. It's a brilliant film, and one that I often go back to as an example of how a film can be horrific and artful at the same time. Very few films impact me on as base a level as Funny Games does, even his later works that trade on similar themes of torture and voyeurism like Cache don't hit quite as hard. If you've never seen it, don't worry, I haven't spoiled too much, there are plenty of other little secrets ready to ruin your life within the film's 107 minute run time. Go now, find it, watch it, live it.

The Criterion Collection's brand new Blu-ray release of Funny Games is an impressive one. This marks the film's Blu-ray debut, and the 2K restoration presented here is wonderful. Fine detail is abundant, and the film is nearly spotless. There is also a lossless 5.1 DTS-HD MA audio track that puts you inside the insanity in upsetting way.

The extras here are well worth your time, with new interviews with Haneke and actor Arno Frisch providing mountains of context for the film, it's conception and reception, and even Haneke delving into the failure of his American remake. There is also an interview with film historian Alexander Howarth who presents further historical and cultural context for Funny Games. One lovely inclusion here is a 45 minute press conference from the '97 Cannes Film Festival featuring Haneke and his married co-stars, the late Susanne Lothar and Ulrich Muhe. Top it off with new writing from film critic Bilge Ebiri, and you've got an impressive package for a film that is well worth any serious film fan's time and money. Highly recommended.

Do you feel this content is inappropriate or infringes upon your rights? Click here to report it, or see our DMCA policy.
Michael HanekeSusanne LotharUlrich MüheArno FrischFrank GieringCrimeDramaHorrorThriller