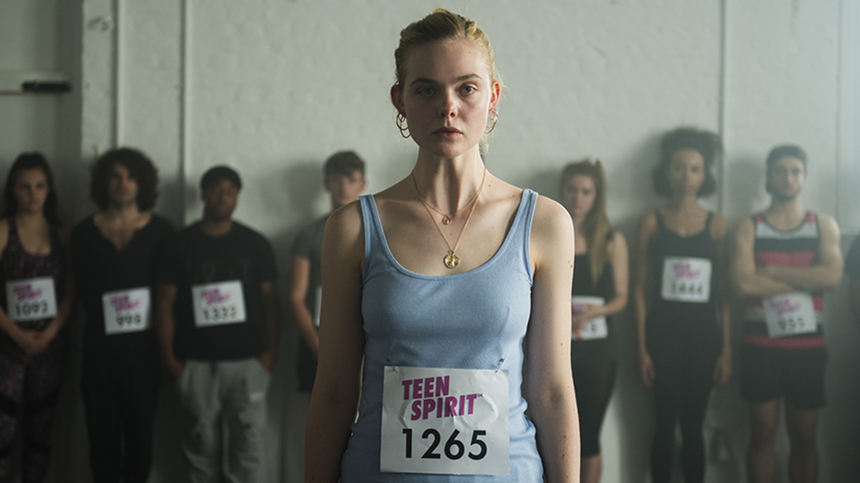 The proliferation of reality TV talent contests seem to have given young people (and older people) a false idea of what it means to have artistic talent: mainly, that you don't. All you need to do is win a contest and you'll be famous, without all that messy business in-between of actually developing and improving your skills. Teen Spirit tries to have it both ways, with a girl with some talent that is developed in record time in order for her to win that fateful contest. In his directorial debut, Max Minghella (actor from Agora, The Handmaid's Tale, Into the Forest) plays it safely down the middle in a predictable, often dull, but still mildly entertaining film about a young girl trying to pursue her dreams.

Violet (Elle Fanning) is a 17-year-old living a dull existence on the Isle of Wight; she goes to school, helps her mother Marla (Agnieszka Grochowska) around their small farm, and works nights and weekends to help keep her family in house and home. She listens to pop music constantly, and whenever she can, she sings at a local bar, to an audience of barely half a dozen. But one night, an older Russian man, Vlad (Zlatko Buric) complements her on her voice, and soon after, the hit TV talent search Teen Spirit announces it's coming to the island to scout for Britian's latest star.

Violet is more than just an ordinary teenager, albeit a first-generation working class one: in so many ways, she is especially ordinary. She is an average student, she has friends who discuss frivolous things, she listens to standard, and she just wants a way out of this ordinary life. Fanning plays her as such a blank slate, perhaps with the intention that the audience can project their own life and desires onto her. But in submerging almost all emotion, we're left with nothing to connect with or root for even as Violet enters the contest. Her won seeming indifference to her situation, punctured only by occasional dialogue, leaves too much to be desired.

The supporting characters are more well-defined, if again exactly what we would expect. Vlad is the perfect mentor: diligent, strong, caring, yet driven by his desire to see Violet succeed and not give into more corporate interests (and of course he has a back story of an estranged daughter). Violet's friends verge on 'mean girls', and there is a boy with a romantic interest in Violet which she semi-reciprocates. But again, this is so expected and plays out as expected that there are virtually no surprises, making the film drag.

Where the film does succeed is its presentation of the music, and the use of music video language. When VIolet first auditions, her song is set to a montage of her life on the farm, with her friends, as well as her on stage, exactly what we would expect from a performer who is thrust into the spotlight by such a competition. Fanning has a decent singing voice, and the other expected montage scenes when she is learning, or singing with her band (the best bit in the film, with an Annie Lennox song as opposed to over-produced generic pop), propel the story in a nice direction.

But even the conclusion is foregone and known (we don't even need the post-credit scene to tell us if she won or not), and while Violet's final performance on the Teen Spirit show is meant to show how far she has come, really, we knew what it was going to be, and it's not as inspiring as intended. While there are some entertaining moments in Teen Spirit, its well-traveled route doesn't offer any new insights or profound meditations on this culture of instant success.

Teen Spirit is currently in cinemas in the USA and opens in Canada on Friday, April 19th.