Review: Triple Threat - 3 Strikes and You're... 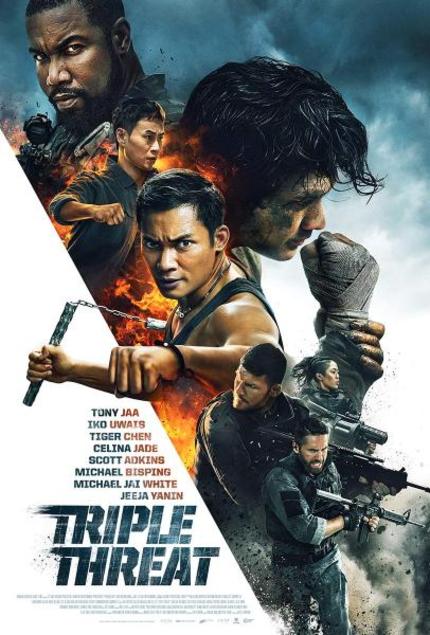 If you were at all interested in Triple Threat, it’s most likely going to be from the casting. Tony Jaa, Iko Uwasis, and Scott Adkins? Those are some good attention grabbing names. Throw in the always reliable Michael Jai White and the interesting forms of Tiger Chen and now I’m raising an eyebrow.

But wait there’s more! Chocolate’s Jeeja Yanin is also along for the ride as well as Who Am I’s rooftop kicker Ron Smoorenburg. Don’t forget about some obligatory MMA fighters and now you have my attention. So what could possible go wrong?

There’s no need to go into the plot of this movie because it’s just there to have the stars run into each other at random moments and fight/shoot their way out. If you paid for a ticket to see this, plot is the last thing you’re hoping is comprehensible. So then as a martial arts movie enthusiast and action aficionado, how does Triple Threat hold up?

So let’s start off with the action side of things and I guess you can say they’re serviceable at best. The opening jungle camp infiltration is like a watered down version of the early moments of Arnold Schwarzenegger’s Predator. We have a bunch of randos getting shot up but nothing really interesting going on in terms of shot composition or pacing. I thought it was funny to see Jeeja’s character randomly firing explosive rounds into the air to have them land haphazardly about the camp. Was she not thinking about her other team mates who could have easily been blown up?

The next big action scene comes in the form of a police precinct massacre. There’s a hit on a billionaire’s daughter and after a short stair shootout, she’s now hiding out here conveniently running into our heroes (Tony, Tiger, and Iko). So now the bad guys (lead by Scott Adkins) are after her and begin shooting up the place. On paper this seems like it could have been a very intense scene as officers are gunned down by men with higher caliber weapons and our heroes desperately try to find a way out. Sadly everything is just so boring to watch and our heroes are literally standing in one room the whole time contemplating what to do next. I wish the scene had officers actually fighting back and not just getting mowed down in random locations. It would have helped to create a sense of urgency as the heroes are caught between gunfire.

The only thing I enjoyed about these 2 scenes were the minimal use of CGI and the actual use of squibs when people got shot up. It’s refreshing to see since it seems so easy these days to add in some poor looking gore in post.

So how about the fights? Please tell me that the fights are at least good right? Right???

Well, yes but no. To all their credit, every on screen fighter is very capable of following their choreography and reacting to moves from their adversaries. This is not at all a problem. My issue with a lot of the fights is that once they actually start to pick up momentum, they all kind of abruptly end. Tony and Iko face off very briefly in the opening action scene only to get literally blown away from each other by one of Jeeja’s explosives. The same thing happens when Iko and Jeeja meet later in the precinct. I was hoping for a cool fight between these two as it’s a martial arts pairing that I didn’t know I wanted but alas, it’s also very sparse and ends in a bang. Literally. Jeeja gets blown up with her own grenade launcher. It’s shockingly cut too quickly to the point where I burst out laughing from confusion. Probably the most memorable thing from this movie though.

Ok so then the movie probably saved it all for the last action scene then, they always do that! Well you’d be correct; all the best fights do come at the end but at a cost…

Why did they shoot this at night??!!

Everyone ends up squaring off in an abandoned mansion that’s lit from moon light coming through boarded up windows and random garbage fires sprinkled throughout. Seriously? When you’re trying to hide bad cgi you shoot at night. Why would you want to hide fight choreography? Why would you rear light characters so their camera facing poses are covered in shadows? It was a confusing visual decision that I really wish they didn’t do. Also don’t let vases get in frame when you’re panning along with people engaging in combat. I think I groaned out loud in the theater…

This whole ending action scene is also edited in such a way that it was hard to keep track of everything going on. Once one pair of fights started, it would cut between other fights happening somewhere else. I almost always hate when martial arts movies do this. Stop breaking up the action with other action. I want to see these encounters till completion, not stop midway, lose the energy, and see what other people are up to. Ugh…

In the end Tony Jaa and Scott Adkins FINALLY get matched up. I’ll say this fight does not disappoint as we get to see what both fighters do well. Scott is always a great visual kicker and his spinning takedowns always land with force and power. His physicality is so consistent that being locked up in a jungle prison camp can’t tone down his muscle mass! Tony Jaa uses Mai Thai to create some great counters to Scott’s reach and is able to best him by getting in close to render his attacks useless. Unfortunately this fight is still shot in the dark and ends right when the momentum begins building. It’s a shame because this is where we get the most interesting fight choreography in the movie and it just peters out. Also where the hell did Tony get that knife from?

Despite all the things I ranted on about I still kind of recommend the movie. You can’t see it in theaters as it was a one day screening so the only place to watch it right now is streaming services which are kind of perfect for the audience they’re going for. The film is loaded to the brim with action so at least it has that going for it. They were able to cast a very good ensemble crew of martial artists but they’re just not utilized correctly in my opinion. I feel like director Jesse V. Johnson is probably working within his limitations to make this movie the best it can be but I personally just need some more visual flare and clarity in my martial arts films.

Zero makes drink along reviews for the show Only Nice Things and contributes to the martial arts podcast Fists of Fail.