Review: ONCE UPON A DEADPOOL, Nothing New Under The Sun, But Still A Pinch Of Naughty-ish Fun 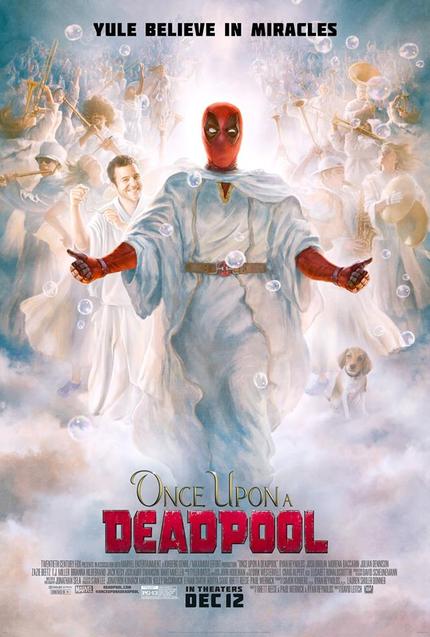 Today marks the cinema release of David Leitch's Once Upon a Deadpool, a PG-13 re-edit of the very R-rated Deadpool 2 from this past May. While it seems like an odd choice, there are actually a few compelling reasons to put this back in theatres, so I thought I'd take a look.

Once Upon a Deadpool is, as mentioned above, a PG-13 version of Deadpool 2 released into cinemas for a limited engagement. This new version is largely identical in terms of plot to its antecedent, with a few very minor tweaks in editing and some sequences shortened or excised.

First of all, in the very meta spirit of the Deadpool series, the film is couched as a bedtime story told to an adult Fred Savage, who unwillingly reprises his debut film role as The Grandson from The Princess Bride, an inadvertently timely tribute to legendary screenwriter William Goldman, who recently passed away. Ryan Reynolds tells the story of Deadpool 2 to Savage, intermittently interrupting the narrative of the film to comment on its cleverness or perceived lack thereof, as well as interjecting a number of dialogue-based gags into the meta-narrative.

In terms of the actual plot of the film, nothing is really changed. There are a couple of brief scenes added in, one in which Deadpool attempts suicide on a park bench that was included as a deleted scene on the recently released home video edition of the film, and another in which Deadpool labels items in the X-Men's fridge while having a short conversation with Negasonic Teenage Warhead and her girlfriend Yukio. There is far more missing from the film than added.

Then there are the most obvious changes. The original film is riddled with ribald language, "f-bombs" galore, and some pretty messy gore. Once Upon a Deadpool either deletes or redubs all of the f-words, softens some of the harder language and raunchier jokes (though not all of them), and removes any trace of red blood splatters in the film as well as cutting away from some of the gorier gags (i.e. Juggernaut Vs. Deadpool, the X-Force farce). Very little is completely removed, although the biggest casualty hits right off the bat as the entire opening killer-for-hire sequence is gone, as is the very entertaining opening title sequence over the Celine Dion tune, "Ashes." That's the most obvious omission.

What’s the point of re-releasing a $700 million dollar blockbuster back into theaters at all? Well, if you'll recall, since the release of the first film, there has been a clamoring from kids and parents who wanted to see Deadpool. If you search for "Deadpool inappropriate for kids,” you’ll find a number of articles, reviews, and think-pieces addressing this very issue. I am one of the parents who saw the film in the cinema as a way to vet it for my own child and found it was nowhere near appropriate. Deadpool 2 did actually take out a few of the raunchier sexual elements that were my main reasons for nixing the first film for my own child, but there was still plenty of reason to be cautious.

So, there's an angle to the story that could present the cinema release of Once Upon a Deadpool as a pure cash grab. Put the film back out with a more accommodating rating, and the current crop of comic obsessed kiddos can go see their wisecracking hero on the big screen. Deadpool has been a part of the cartoon X-Men universe for a while, so the kids are familiar with him and his personality, this is a chance for them to feel a little grown up. Also, now parents won't feel like such complete heels for taking their kid to a film that is borderline inappropriate, as opposed to way-over-the-line inappropriate.

However, on a lighter, more positive note, there is the charity angle. One dollar of every ticket sold will go to Fuck Cancer, which is a good thing. Is this the primary reason for rereleasing a film that already made over $700 million worldwide? Probably not; however, it's not a bad side-effect.

Here’s the rub, it's actually not too bad.

If you've already seen Deadpool 2 at full strength, it's still worth checking out to get a few belly laughs in during the Fred Savage cutaways, which are cleverly written and self-deprecating. The gag could wear thin, but it's used sparingly enough that it is a welcome addition to the film for this purpose. Does it feel like a DVD extra? I mean, sure, I wouldn't say no to this version on home video. It isn't a particularly cinematic device, but it does help take the edge off paying to see the same film twice because there are enough new laughs here to make it a fun audience experience. Some of the dirtiest material in this version is actually in the framing device, all done through innuendo, but I laughed, and my 14-year-old child did as well.

In terms of missing the cursing and the blood, it actually feels okay. The blood was all CG anyway, so erasing it and removing a few of the above-mentioned gory gags is handled fairly well. It tones down the gross-out factor, and the removal of these bloodier moments and visuals actually presents good reason to re-record some of the more explicit dialogue. The thing I missed most was actually the previously mentioned extended opening sequences and the opening credits. Apart from that, pretty much everything of substance still exists in some form or another.

While the idea behind placing this back in theaters as a PG-13 film is obviously to expand the paying audience, there are still enough dirty jokes in the film to make the kids feel like they are tasting a bit of forbidden fruit. I know my son was laughing at some of the raunchier jokes that he might only halfway understand, but I was okay with that and he had a pretty good time. That being said, if you are an adult who already paid to see the film once, you can probably wait until this version hits some form of home video or streaming and you would be just fine.

Once Upon a Deadpool opens in theaters nationwide today, December 12.

Do you feel this content is inappropriate or infringes upon your rights? Click here to report it, or see our DMCA policy.
David LeitchDeadpoolDeadpool 2Ryan Reynolds