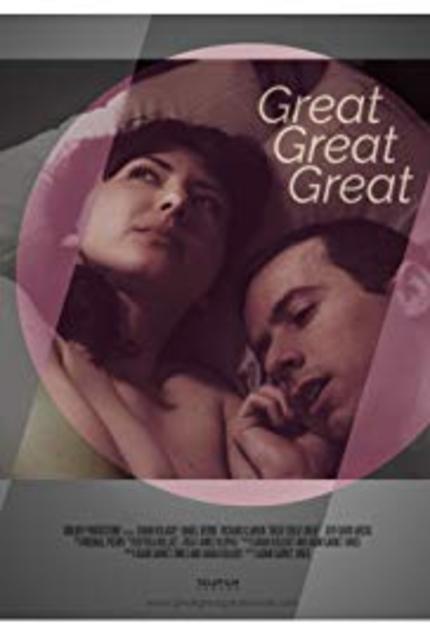 The blatant wear and tear of a so-called committed romantic relationship gone south is an obvious issue to confront because essentially the writing is on the wall--both parties are well aware of the deterioration of affection in effect. However, the lovelorn landscape of an immensely unsatisfied lover and her affable but clueless, depressed companion is cynically chronicled in co-writer/director Adam Jones's affecting romantic drama Great Great Great. Jones's ("Fire Song") revealing showcase of crippling stagnation and blissful indifference between a disillusioned Canadian couple contemplating the next serious step in their so-called affectionate union is quietly calculating. Great Great Great is a little sharp observational character study of drifting togetherness set off by the detached whims of its tortured tandem.

At the center of the quieted internal frustration is Lauren (Sarah Kolasky, also the film's co-writer), a Toronto-based woman stuck in a lengthy and tediously drawn-out relationship with her live-in boyfriend Tom (Daniel Beirne, "The Handmaid's Tale"). From the outside looking in it appears that Lauren has a sensible, criminally nice and easy-going guy in the lanky-built Tom. Tom seems quite accommodating to Lauren with every sweet-minded bone in his wiry body. After their five-year romantic bond one would think that Lauren and Tom are on the same emotional page to make that eventual leap into matrimony.

Here is where things get tricky. Admittedly, Tom is an awfully compassionate man with endearing qualities despite his nerdy exterior. However, the guy is chronically unemployed (sadly, Tom sits by the phone awaiting the call from the city planner job that no longer is interested in his on-the-job services). Clearly, Tom is in a deep funk as his prospects are minimal. The motivation for job-searching, socializing, and securing a sense of stability for his and Lauren's immediate future is getting dimmer by the moment. Understandably, Lauren's patience is wearing thin. How can she depend on her good-natured skinny partner-in-passion if he is unrealistically dormant about his not-so-promising employable predicament?

To further add to 30-year old Lauren's skepticism about her declining love life she receives word that her parents are getting a divorce after decades of being together. Now Lauren really has instilled fears about her engagement to Tom whose random gym visits and Lego-playing habits are getting on her last nerve. However, Lauren sees an opening to channeling her robust romantic needs when an old flame David (Richard Clarkin, "Goon") joins her company in Toronto. David is everything Tom is not...manly, assertive, unapologetic, and a top dog at the company (he has a managing position). Suddenly, Lauren is reminded how secure a go-getter is in her former lover. In short, Lauren likes what she is hormonally feeling about handsome David.

Although still ambivalent about her shaky engagement to floundering Tom and hooked on her refreshed attraction to David, Lauren decides to go the convenient route and have the best and worst of both worlds by succumbing to an ill-advised love triange. While getting into tricky territory Lauren calls the shots based on her sordid decision to play footsies with both men. She will go the full mile to satisfy Tom's sexual needs and placate his bedroom fantasies but this is done with her overt desire for David in mind. Apparently it is easier to tolerate Tom and not face the daily heartaches as long as she has David on the side to liberate her bad-girl behavior. Can the conflicted Lauren have her cake and eat it too?

The developing dilemma in Great Great Great is not what one would call overly gripping. Nevertheless, Jones's methodical direction and the simplistic, collaborative writing of Jones/Kolasky is skillful enough to demonstrate the intracacies of a flawed woman in surfacing pain whose only reasonable solution is to patch up her listless love life by finding solace in utter confusion and deception. Kolasky's Lauren is in no way, shape or form sympathetic by her misguided choices. She dives into romantic chaos out of paranoia, unfulfillment, curiosity, and fear. The three-way love triange among Lauren and her two suitors feels somewhat slight and predictable but the small-scale tension just fits the bill for this slim 76-minute naughty romancer.

Basically, Great Great Great's low-key charm is its bewildered feminine centerpiece grasping at a combination of desperation and despair of a transitional lonely heart bouncing between two men without her feet firmly planted on the ground. Kolasky conveys the mischievousness of Lauren's misactions with noted aplomb. The gentle anguish and indifference is realized in Kolasky's applauded performance. Overall, Jones's two-timing tale of a romantically detached woman stuck in a malaise of lust and life may not necessarily be considered great, great, great but there is certainly no shame for the tandem of Jones/Kolasky settling for good, good, good.

Do you feel this content is inappropriate or infringes upon your rights? Click here to report it, or see our DMCA policy.
an affairCanadaGreat Great Greatlove trianglerelationship woesromancestagnation