REVIEW: Amazing Grace is a mighty blessing of a documentary featuring the heavenly vocals of the late Queen of Soul Aretha Franklin 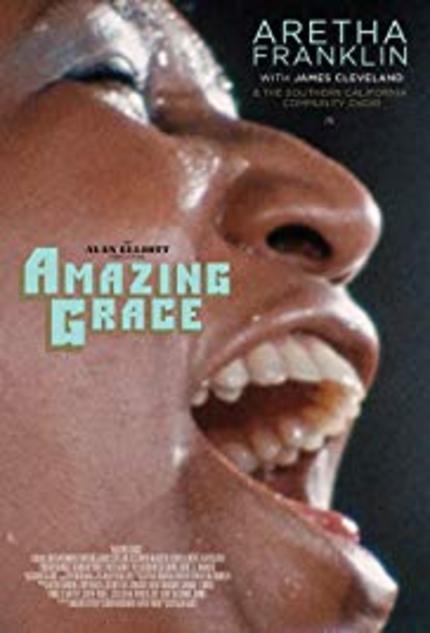 They say that if something is worth the wait then impatience is the enemy of anticipation. Well, after a 46-year hiatus the soulfully dynamic documentary Amazing Grace arrives on the scene as it automatically pays homage to the late great singer Aretha Franklin, the definitive Queen of Soul. This lyrically arousing and hypnotic concert film featured the indomitable spirit of Franklin and her powerful trademark vocals that captivated the New Bethel Baptist Church in Watts, Los Angeles back in January 1972. The speculation hinted that Amazing Grace was never going to see the light of day but in the aftermath of Franklin's relatively recent death this elegant and highly spirited showcase of gospel-induced vibrancy definitely showcased the talented chops of the decorated songbird during the height of her musical career.

The late director Sydney Pollack filmed Franklin and the Southern California Community Choir as she was in the process of recording her gospel album during a two-day stint in front of a live audience. As expected, Aretha was gloriously shining in her element as even the film's sound engineers could not do justice to the resounding force that is Aretha's arresting, eloquent voice soothing the unfulfilled ear. Indeed, watching Aretha transfix the congregation with her emotional showmanship was indeed poetry in motion. Amazing Grace is a resonating reminder of what a legendary entertainer Aretha Franklin was in conviction and consciousness.

Curiously, the backseat politics behind the delayed release of Amazing Grace is almost as interesting as what Pollack shot initially on screen. For starters, the documentary was deemed rather incomplete in its grainy presentation therefore considered unreleasable. It did not help matters any that Pollock was unable to apply the polished finishing touches on Grace especially after his passing a decade ago. Furthermore, Franklin was not too keen on having the elaborate footage of her mesmerizing performance screened a few years back so she blocked its distribution. Unfortunately, the result led to this musical buried treasure of a raw and riveting Franklin at her animated glory being tucked away in some vault.

Ironically, what Franklin felt about her self-doubts regarding Amazing Grace turns out to be the ultimate nostalgic representation of how vitally magnetic a youthful Aretha Franklin was in the comforts of the Lord's house of worship. It is a telling tribute to a belated powerhouse performer and the memorable music she intoxicated us with so effortlessly throughout her distinguished artistry. Thankfully, a glimpse to the past for two solid days in the early '70s to sample the lyrical wonderment of the iconic Franklin in her spiritual surroundings is a blessing that allows Amazing Grace to take us back to a special place and time when music was intrinsically defining and resonate. No doubt that Aretha Franklin was the gifted messenger of such a soul-searching transaction from her motivational mouth of reassuring ballads transferred to the calmed psyche of her fellow ardent churchgoers.

To say that witnessing the greatness of Franklin's rehearsals and actual concert in church felt like a religious experience beyond description is putting it mildly. In watching an intriguing artist such as Aretha Franklin belting out her selections of sensational songs for her Amazing Grace album is nothing short of masterful. It is a crying shame that the fuss over the documentary's questionable preparation and the litigation issues deprived Franklin fans at a once-in-a-lifetime opportunity to see the Queen of Soul baring her creative heart at a critical time when cultural pride and identity was a major factor reinforced in black America.

Everything about the majestic aura of Amazing Grace feels authentically collaborative in scope: Aretha's flowing perspiration as an added hallucinatory elment to her throbbing pipes, the deeply inspired sermons administered by Rev. James Cleveland between Aretha's liberating gospel ditties, the infectious musical numbers such as "Precious Lord Take My Hand", "You've Got A Friend", "How I Got Over" and of course the tearful yet affirming "Amazing Grace". In being on the sidelines as yesteryear's Aretha Franklin seizes your wandering attentions your convinced--or at least drawn into the realm of her spell-binding oracle. Aretha resourcefully brings back the grip of the Almighty's church influences whether you are prepared to embrace the secular notions or not.

Purely uplifting in its astounding skin, Amazing Grace does Aretha Franklin's legacy proud as it displays the trajectory of this remarkable woman's heralded beginnings to the Divine Diva whose moving music will forever be the soundtrack to our precious existences.

Do you feel this content is inappropriate or infringes upon your rights? Click here to report it, or see our DMCA policy.
1970'sAmazing GraceAretha Franklinchurchgospel musicLos AngelesSidney Pollack