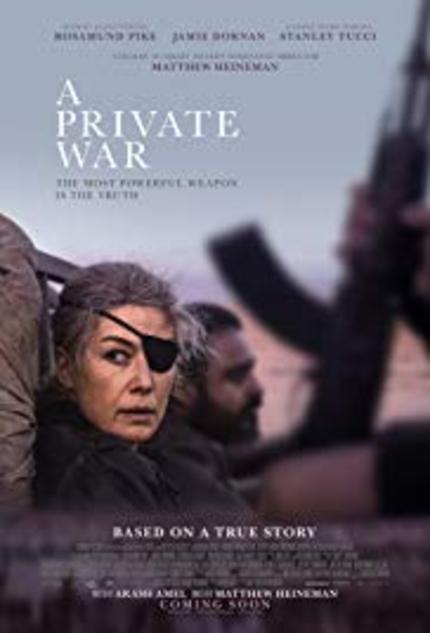 A Private War could not be timed more fittingly for its release given the current climate of criticism aimed at journalists from all walks of life reporting the political strife that persists. Specifically, the imperiled journalists spotlighted in director Matthew Heineman's ("City of Ghosts") clear-eyed yet nightmarish drama detailing the dangerous frontline reporting duties of war correspondents is resoundingly received with dramatic urgency. A Private War is hauntingly involving in its depiction of the scarred psyches of journalists acting as devoted mouthpieces commenting on the battlefield madness that eerily surrounds them.

Indeed, A Private War is a horrific telling of one Marie Colvin--an eye-patched renegade of a woman daring to challenge the boundless limits of journalism in some of the most notorious parts of the world. Instinctively feisty and determined, Colvin was very accomplished and celebrated in her wartime endeavors covering the combative chaos that globally persisted. Sadly, the heralded Colvin died during a fateful assignment back in 2012. Clearly, this is a caustic reminder on how risky yet dedicated these war correspondents are to their craft and the worldwide public that benefit from their precarious sideline reporting.

Heineman, a documentarian known for such noteworthy projects as 2015's Cartel Land, seems to transition effectively as A Private War is his impressive, candidly reflective feature debut. Oscar-nominee Rosamund Pike ("Gone Girl") gives a powerful and revealing performance as the late award-winning Colvin that embraced her high-risk occupation with abrasive enthusiasm. Pike presents Colvin as a rebellious, hands-on truth-seeker in a tour-de-force turn that energizes this biting biopic in all its stark skin. Sadly, the tumultuous travels from one hotbed region to another would ultimately claim Colvin's adventurous life. Nevertheless, one would imagine that the committed Colvin would do it all over again in the name of jeopardized journalism.

Essentially, A Private War delves into the topsy-turvy professional and personal life of the conflicted Colvin. Although she appears heroic in her journalistic endeavors Heineman assures the audience of the flawed reporter's inner demons. Broken relationships, excessive drinking and mingling, traumatic exposure to the ugliness of war--all takes its gradual toll on the headstrong Colvin. Still, she perserves and digs into the raw assignments with reckless abandonment. Mission after mission, Colvin's 11-year period touring hedonistic hotspots understandably becomes an erratic ordeal. Her solution, despite warnings from sources such as her London Sunday Times editor Sean Ryan (Tom Hollander, "Bohemian Rhapsody"), is to forge on and face the corrosive consequences without a decent break. Ultimately, her turbulent journalistic journeys would come to a tragic ending.

Relentlessly invigorating, A Private War is the cautionary canvas that showcased the tightrope tendencies of a British war correspondent restless in her pursuit of a sordid story at a given costly price. Pike marvelously jumps into the intepid soul of Marie Colvin as her private war--as seen through her weary eyes and felt in her mental stabilities--quietly rages on within her consciousness. Surprisingly, Jamie Dornan (from the "50 Shades" films) is terrifically received as noted war photographer Paul Conroy as he joins the active Colvin on what was perhaps the most dangerous undertaking the duo has ever faced--the severe ruins at the Syrian city of Homs.

Whether facing duplicitous dictators or the combat confrontations that they endorse in blood and stone War illustrates the very concept of Marie Colvin's unselfish sacrifice and the iffy guarantees that it would safeguard her (or others) from their applauded convictions.

Do you feel this content is inappropriate or infringes upon your rights? Click here to report it, or see our DMCA policy.
A Private WarjournalistsMarie Colvinpost traumaticRosamund Pikewarwar correspondents