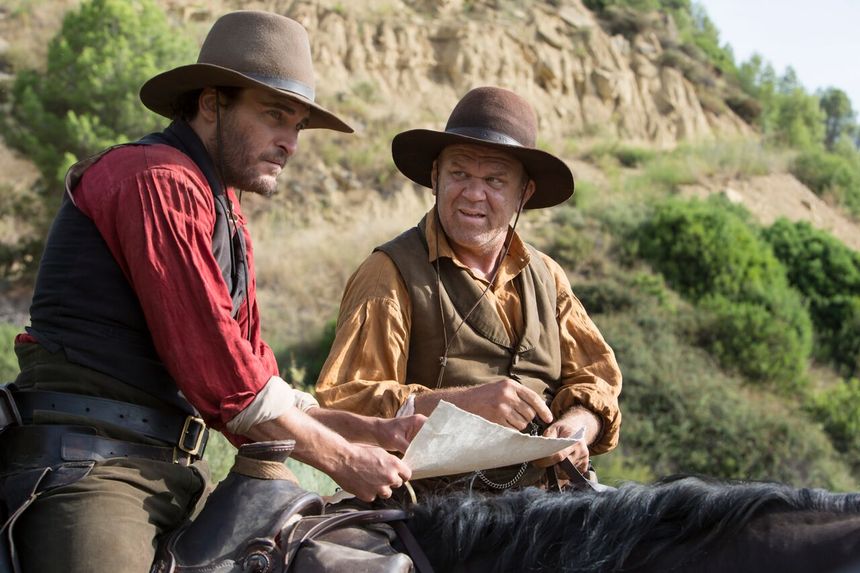 The Sisters Brothers is an excellent movie, but it is being marketed in all the wrong ways. I suppose if it results in a financial success, then all's well that ends well. I worry, though, that once general audiences see the thing, they're going to realize it's not what they signed up for, and the backlash will begin.

So, let me say this right now: The Sisters Brothers is not a wacky Western comedy, as the trailer would have you believe. I think every truly laugh-out-loud scene -- I can count them on one hand; two if you include smiles and appreciative chuckles -- has been unceremoniously crammed into the trailer. Add in a generic, female-vocal cover of Soft Cell's "Tainted Love" and you've got an unspoken promise for silly antics set to anachronistic pop songs.

In actuality, Jacques Audiard's (Dheepan, A Prophet) adaptation of Patrick DeWitt's novel is a much more sensitive, weary, thoughtful film than that. John C. Reilly and Joaquin Phoenix play Eli and Charlie Sisters, ungraceful brothers who have achieved notoriety as efficient killers-for-hire, maybe partly because they have a funny name. In classic fashion, one of the brothers still relishes the violent, nomadic lifestyle (Charlie), while the other is more than ready to trade it all in for a sedentary existence (Eli, the eldest) and perhaps even a family of his own.

Their latest gig finds the brothers headed to California from Oregon, on a mission given them by the Commodore. He wants them to extract a secret formula that turns gold visible in a river, from its inventor, Hermann Warm (Riz Ahmed). Also hired by the Commodore is John Morris (Jake Gyllenhaal) a quiet, well-spoken man tasked with finding Warm and holding him for the Sisters brothers. However, Warm's ideals and gentle demeanor soon convince Morris to have a change of heart, and the two become partners in prospecting.

The story meanders throughout, and characters are frequently changing course or gaining moral conviction. There is plenty of violence, but Audiard does not stylize it, or make the brothers appear cool while they execute their enemies. Rather, he consistently questions the violent choices made by Phoenix's Charlie, and often has other characters make more ethical decisions when provided the opportunity. Indeed, if the film has any "bad guys" (aside from the more obvious option, the Commodore) they would be violence, greed, and hatred.

The direction, writing, and entire cast are exceptional, but the best thing about The Sisters Brothers is far and away John C. Reilly's performance. He plays Eli as a man who is too introspective and empathetic for his line of work, too kind and civilized for the Old West, but too loyal and loving to abandon his careless younger brother. It's not a new sort of character, but Reilly makes him feel heartrendingly real from the moment he first buys, and awkwardly uses, an early version of a toothbrush. Later, he spies Morris using this newfangled contraption as well, and it wordlessly bonds them as men trying to better themselves in circumstances that discourage such change.

Through many such moments, The Sisters Brothers advocates for a kind, moral, forward-thinking masculinity. And, sure, sometimes it's funny.

Do you feel this content is inappropriate or infringes upon your rights? Click here to report it, or see our DMCA policy.
Jacques Audiardjake gyllenhaaljoaquin phoenixjohn c reillypatrick dewittriz ahmedviff

More about The Sisters Brothers