Vancouver 2018 Review: EDGE OF THE KNIFE, Immersed in the 19th Century

Directed by Helen Haig-Brown and Gwaai Edenshaw, the film is set on Haida Gwaii. 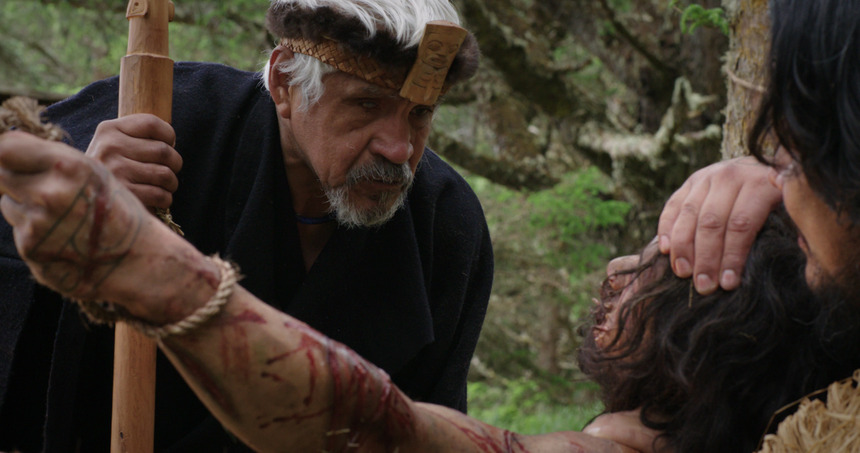 Edge of the Knife (aka SGaawaay K'uuna) is a film whose reputation will precede it, but for all the right reasons. Its existence marks the first ever feature entirely in Haida, an indigenous language that is spoken fluently by less than 30 people today.

It was also filmed and set on Haida Gwaii (formerly known by the colonial name Queen Charlotte Islands), a cluster of islands off the northwest coast of British Columbia that still enjoys beauty relatively untouched by pollution or excessive logging. Thanks to these factors, Edge of the Knife is a truly immersive nineteenth-century period piece.

The film's story is fashioned around a Haida folktale: the origin of "Gaagiixid," or the Haida Wildman. A young man, Adiits'ii, flees his village in shame after being responsible for a tragic death. Those left behind assume he is also dead.

As they mourn and eventually move on with their lives, Adiits'ii plunges deeper and deeper into the woods until his spirit is broken and the immaterial lifeforce of Gaagiixid claims his body. Thus begins his unsettling descent into a bestial creature, complete with multiple body-horror shock scenes.

Despite what that plot description suggests, the film is more often a quiet, moody, meditative work. Perhaps it's the natural cadence of the language, or simply the actors taking their time with a largely unfamiliar dialect, but the characters typically speak in a slow, poetic lilt. The pace mirrors this rhythm; there is time to breathe and live in the onscreen world created by co-directors Helen Haig-Brown and Gwaai Edenshaw.

Like 2015's The Witch, Edge of the Knife takes advantage of the inherent spookiness of nature in the absence of electricity or technology. When night falls in the film's Haida Gwaii, the cold, damp, pitch dark quiet almost feels physically present. Aside from a few overly-stylized scenes depicting Adiits'ii's increasingly feral perspective, the movie is gorgeously shot and features several breathtaking compositions. The acting, eerily sparse musical score, and costume design are also impressive.

But most importantly of all, Edge of the Knife succeeds as a triumph of Indigenous creativity and talent. Almost everyone involved in its creation is of indigenous -- if not Haida specifically -- ancestry. In a year where fellow VIFF film Through the Black Spruce came under criticism for having a white director, not to mention its source material coming from fraudulent 'native' author Joseph Boyden, Edge of the Knife's commitment to authenticity is admirable. I hope it sets a much-needed precedent for Canada's film industry.