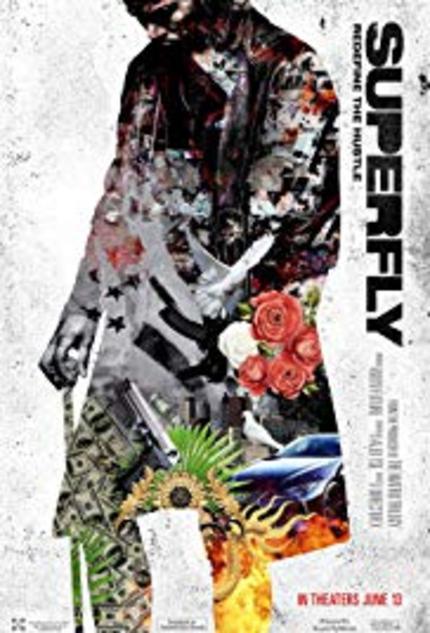 It was inevitable that Director X's overwrought flashy, stylish and glossy remake of the late great Gordon Parks Jr.-directed 1972 blaxploitation classic Superfly would prove to be a super-charged vehicle for today's urbanized audiences desensitized by the glamour and graphic gumption of today's rap/hip-hop hedonistic scene. In fact, Parks's ground-breaking, vintage crime caper throwback would be dismissed as a passe Disney movie compared to Director X's unapologetic, fatally frivolous drug-dealing drama laced with high-octane hedonism and killer tunes to match on the hardcore soundtrack. Back in the day, Parks's shifty showcase was not what one would label subtle or gently suggestive. Nevertheless, the dynamic action-packed ditties of raw black cinema such as Sweet Sweetbadaassss Song and Shaft cleverly set the stage for the aforementioned Superfly and other imitators that followed the path to churning out percolating pro-Black grindhouse thrillers that paid dividends at the mainstream and inner-city box office alike. These blaxploitation actioners had their share of eye-rolling excess, manufactured mayhem, and vacuous sexual titillation to go with the exploitative flow. However, at the root of yesteryear's Superfly and those other ebony-flavored rollicking romps was a sense of consciousness about the jeopardized black experience in the mean streets.

Now one can argue the societal timing and reflection of today's inexplicable take on the flagrant decadence of drugs, violence, promiscuity, and explicit music that go hand-in-hand in the current climate of America's rebellious youth movement. Naturally, Director X's updated rendition of the suave, risk-taking dope dealer out to settle his last score has some swaggering credence that plays into the erratic appeal of this exaggerated and baseless reboot. Still, 2018's Superfly feels like some padded, bombastic length rap music video that is overly showy in naughtiness but offers nothing constructive, calculating or crafty to its macabre mischievousness of storytelling.  Granted that Director X has dabbled in his generous dealings with directing countless music videos from some of pop culture's notoriously popular rap stars/musicians.

Sadly, Director X forgot to helm a structured movie foundation with well-rounded sinister characters, challenging plot points that do not echo the millennial version of New Jack City recycled suspense and an underlying message of hope and dignity among the over-the-top, empty-minded chicanery. Instead, Superfly flexes its cautionary muscles on well-dressed and attractive male and female street hustlers, contrived elements of situational eradication and a penetrating raw soundtrack that is sure to sell some tracks.  Superfly routinely struts and plays dress up with its ostentatious shock of drug peddling, voluptuous babes, sleek cars, and menacing gangbangers yet the film feels strained and ludicrously pulpy.  In comparison to the invigorating and liberating Black Panther that was a global sensation mired in pride and vitality, the woefully tedious and toothless Superfly defiantly set the clock back so shamelessly. Where are the late visionary Parks's adventurous direction or the smooth and silky thought-provoking musical vibes of the dearly departed decorated songster Curtis Mayfield when you need them?

Cocaine kingpin Youngblood Priest (the dapper Trevor Jackson assuming the role made iconic by Ron O'Neal) just got an early wake-up call when surviving the latest deadly attack on his life. So Priest must get out of the powdered business before it claims him big time. Having made his fortune in the perilous world of the dope game Priest wants to disappear but still needs to make that one last profitable score that can set him straight for years to come. After all, the streets of Atlanta--both decrepit and polished--have piled his pockets handsomely (the original Superfly as many will recall took place in New York City). Now the greedy associates want some payback from the prosperous Priest--call it full-scale envy if you will. The shakedown is on as a who's who of riff-raff wants Priest's endangered neck--the drug cartel family representative/contact Adalberto Gonzalez (Esai Morales), Priest's druglord mentor in the karate-kicking Scatter (Michael K. Williams), a couple of corrupt cops (Jennifer Morrison and Brian F. Durkin) and an assortment of vicious rappers/gang members that want their shot at the steely cool, decorated drug pusher.

Of course, Priest has his close partners watching his wanted back including slimy partner-in-crime Eddie (Jason Mitchell). And the good-looking cocaine-carrying cad has his glorious fill of juggling a couple of gorgeous love interests that tend to his every whim in the likes of Lex Scott Davis's Georgia and Andrea Londo's Cynthia. When you are the coke kingpin of Atlanta everyone seems to want a piece of Youngblood Priest. The question remains: how long can he duck and dodge his fellow deplorables before his expiration date is due in the hostile narcotics racket?

Profoundly sketchy, scattershot and overall unappealing in its uneven boisterous presentation, Superfly aimlessly pounds its congested chest without offering any grounded payoff in redemption or retaliation. This bloated bland actioner, regardless of random gunplay or coke snorting intrigue, simply panders to the concocted splashy decadence without highlighting anything substantial behind the monstrous madness of self-destruction for Priest, his dangerous detractors or corrosive enablers. The movie is a jumbled mess and there never seems to be a modicum of edginess that one can sink their teeth into with conviction. Jackson, much like O'Neal before him, exudes a charismatic trance that is sure to get the masses of ladies attentive for this poisonous pusher bad boy.  Plus, we have not even touched upon the silly-minded inclusion of Priest's all-white wearing rivals known as the Snow Patrol (no, your leg is not being pulled) or the crooked Mayor of Atlanta in on the lowdown (played with hammy heavy-handedness by Antwon "Big Boi" Patton).  Also, Kaalan Walker's cliched idealistic cop wants to tangle with the cunning coke king Priest but has to stand in line.

Screenwriter Alex Tse ("Watchman") seems to have so much loose subplot ends in his nonsensical scripting that his floating subplots could get lost in Priest's white-powdered mountain stash back at his posh mansion.  The celebrated soulster Curtis Mayfield once sang the probing and cautionary tune Freddie's Dead on the highly preferred Superfly soundtrack from yesterday. Well, Curtis...the same can be said for this rote and reckless farce of a fruitless firecracker.

Do you feel this content is inappropriate or infringes upon your rights? Click here to report it, or see our DMCA policy.
AtlantaDirector Xdrugsfinal scoregangsrap musicrebootSuperflyTrevor Jackson