There's a strange little film out from Scream Factory today, one of two I've reviewed. Its the 1959 film The Tingler from William Castle, which has a short, relatively tame synopsis on IMDb:

An obsessed pathologist discovers and captures a parasitic creature that grows when fear grips its host.

If you know anything about this semi-campy film, you know that there's much more to the story. The late, great Vincent Price plays said pathologist who's got to contend with a garbage wife who basically sleeps around every night, as well as this floppy lobster-looking thing that he's removed from a corpse that was scared to death. That's "the tingler" you see, because they can't figure out a Latin name for it yet. (Or maybe these scientist-doctors can't really believe what they see. Or maybe the screenwriter and director/producer couldn't think up anything better.)

This weird parasite is one that grows from the spine when a person is scared --- and can cause death if one can't release fear by screaming --- can kill its host, and it will attempt to kill others if freed and let loose upon the general population, as Warren (played by Price) does in the film. 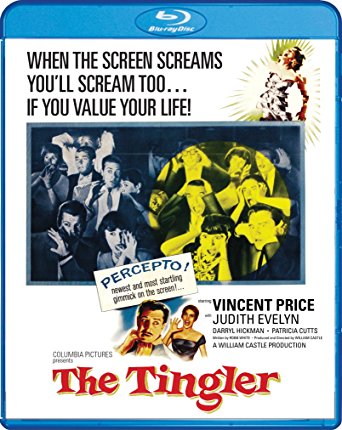 Just for a second; can you imagine if this was a real thing? What would become of society?!

Anyway, the rubber prop being pulled around onscreen doesn't look much like something anyone would be afraid of --- but even if you can see the wires that make it "move," the actors are very good on the whole, and sell it well.

Price is mesmerizing, as always, and his women co-stars (Judith Evelyn, as well as Pamela Lincoln and Patricia Cutts, who play sisters) are also excellent.

While the script is a little uneven, and of course, unbelievable, it does captivate. The Tingler is one of those weird old films that will catch your attention if you happen upon it. Price hams it up a little but not as much as he would later in his career.

The Tingler was also responsible for the very first depiction of LSD usage onscreen. Watch Price's character inject himself and lose his mind as he perceives the walls coming down around him. Horror and hilarity ensue.

In short, it's a really fun movie and a great watch. Have a bad day? Escape with The Tingler, and it's quite likely you'll feel much better. There's something about these strange old films that I find enormously comforting.

Save for one scene which must have terrified audiences back in '59 --- an infamous bathroom scene with two major, stand-out colorizations --- the film looks pretty good. (Almost like a campy version of Diabolique.) You can see the grain, but it's mostly minor. Sound quality is excellent, much better than you'd think for a film of this age.

The featurettes are all fun and interesting; I hadn't seen some of the promotional stills and lobby cards in the gallery, and it was great to watch interviews with Lincoln, who played Lucy (younger sister to Warren's/Price's adulterous wife), as well as the publicist at the time, who also did PR on Castle's film Strait-Jacket twith Joan Crawford. (That release is also out today!)

I'm thrilled that Scream Factory has given us this edition of The Tingler and some nice extras; I love this release and highly recommend it to fans of Price, Castle, and weird film.

Want more? Check out the awesomely hammy Vincent Price in this clip from the film below. You can also order this Blu-ray directly from Scream Factory here.