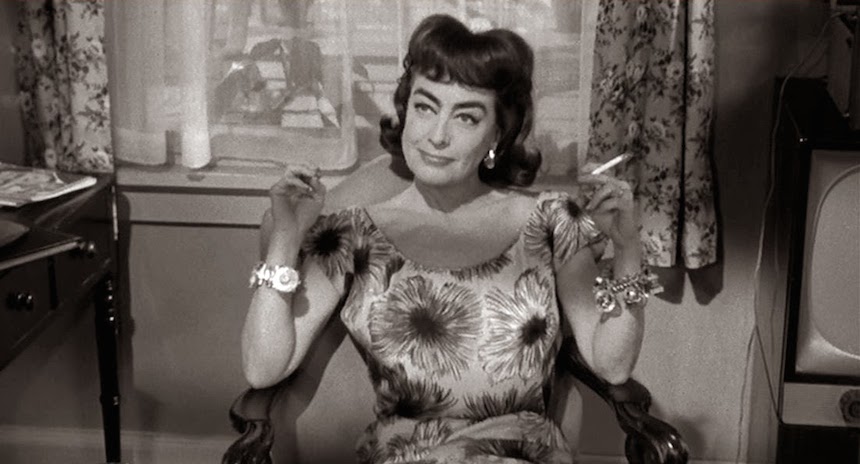 It's been a long time since I've seen Strait-Jacket, but it's just as odd and as much fun as I remember. William Castle rarely lets me down; his films have a comforting glee in them, just as the weirdness descends like a welcome blanket on a cold day. For those unitiated, he directed The Tingler, Mr. Sardonicus, 13 Ghosts, House on Haunted Hill, and was producer of Rosemary's Baby, among many other films. 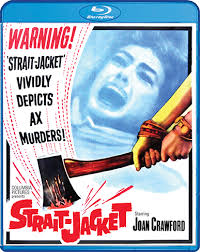 As of today, you can get Strait-Jacket (as well as The Tingler) from Scream Factory, and what a terrific release it is. It looks incredible for a film released in 1964, and sounds just as great.

In the film, Lucy Harbin (Joan Crawford) finds her husband (a young Lee Majors!) in bed with another woman. She promptly picks up an ax at their farm, and as her horrified daughter Carol watches, hacks them to pieces.

Fast-forward twenty years later, and Lucy has been released from the asylum. She's nervous and far more muted than the younger self we saw. Carol has grown into a good sculptor, and continues living on a farm with her uncle and aunt. She's got a good life, and is secretly engaged to a local rich boy. Lucy comes to live with her and the rest of the family.

It's not long before Carol tries to push Lucy into the younger version of her mother, with disasterous results. Soon enough, there are more ax murders, and the rich boy's parents get wind of their son's secret engagement and since Carol is from the "wrong side of the tracks," put a kabosh to that. To tell you what happens next would spoil the film, but it's fun to watch some craziness ensue.

Crawford, as always, was at the top of her game here, playing it straight but wildly entertaining nonetheless. Majors is good in his tiny role, and Diane Baker as Carol is also quite good. George Kennedy has a small role as sleazy farmhand, which is both squirm-inducing and hilarious to watch.

I'd like to thank Scream Factory for this lovely restoration of Strait-Jacket, as well as the featurettes on this disc. There are so many great time capsules (special features) to be had that will make collectors drool.

Let's take a look at these great bonus features:

There's not just a Joan Crawford costume and make-up test, but an ax-swinging test! It's just hilarious. Oddly enough, there's a costume test where her character (in flashbacks) is listed as being 29-years-old on the slate. Crawford herself was around 62 at the time, and the main character she was playing was 49.

The original actress who was to play Crawford's daughter in the film was interviewed and has a few things to say about the movie star's hot-and-cold nature. Likewise, the publicist of the film at the time has a few stories to tell about the making of the film and on being at appearances with Crawford.

I haven't yet been able to delve into the commentary, but I bet it's filled with interesting tid bits and stories from the three film historians listed above. Want to get your hands on Strait-Jacket? Head on over to Scream Factory's site here. I've posted the film's trailer below. Enjoy!