Now on Blu-ray: Lovecraft Lives In DAGON & BEYOND RE-ANIMATOR From Vestron Video

Lionsgate's specialty imprint Vestron Video Collector's Series soldiers on with the North American Blu-ray debuts of a pair of H. P. Lovecraft adaptations from Brian Yuzna's Fantastic Factory. First up is the 2001 Stuart Gordon directed Dagon, a tale of a family stranded on an island of fish-god worshippers. Next up is the third (and final?) installment in the Re-Animator series, Beyond Re-Animator, from 2003, which finds Dr. Herbert West continuing his research behind bars.

Are these films worth the upgrade from their ancient DVD releases? Check out further details below. 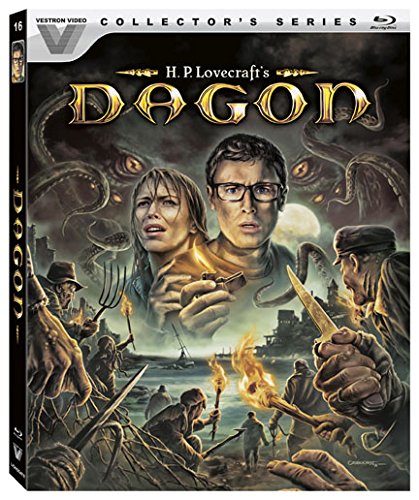 In 2001, producer Brian Yuzna (Society, Re-Animator) was looking for a new venue to get films made and the solution came in the unlikeliest of places, Spain. Filmax, a production house, opened the doors to Fantastic Factory, a specialty company dedicated to making genre films (horror, science fiction, etc...) with Yuzna and Julio Fernandez steering the boat. As a fan of Yuzna's film going back to me teens in the early '90s, reading about the possibility of new work was exciting, but the output was a bit more hit and miss than anyone anticipated.

The first film, Faust: Love of the Damned, was a narrative mess, but did satisfy the gorehound in me with plenty of gooey practical FX and a gloriously over the top performance from Wishmaster's Andrew Divoff. However, with Dagon, Yuzna and team went back to the very fruitful well of H. P. Lovecraft, an author who'd provided the inspiration some of his biggest successes and whose output was still relatively untouched despite years of adaptations. Yuzna brought back his old friend Stuart Gordon, director of Re-Animator, to work on Dagon, a story about an island of worshipers of an ancient fish god. The result is this largely underseen gem.

A young couple celebrating a recent business deal with a trip out onto the seas off the coast of Spain find themselves in a bit of a pickle when a storm forces them to land on what seems like a deserted island. As they search for help in the nearest village, the couple are separated and it soon becomes apparent that the island isn't deserted at all, and that visitors are not welcome. Slowly a mystery begins to unfold that leaves them all in terror as the island's residents, worshipers of the fish god Dagon, look for their next sacrifice.

Dagon is a far cry from the frantic madness of previous Gordon/Yuzna collaborations like Re-Animator, From Beyond, and Dolls. The film takes the far more subdued tone of a supernatural mystery story rather than an out-and-out splatterfest, making the results not necessarily worse, but certainly unexpected. Leading man Ezra Godden is - pardon my trivialization - a poor man's Jeffrey Combs, mannerisms, dialect, and all. He's not bad, he's just not Combs. The rest of the cast manage decently in largely anonymous performances, but the anonymity does help somewhat in providing an air of mystery on the island, so it's all good.

Dagon isn't among the best Lovecraft inspired stories, but it also isn't among the worst. It sits neatly in the middle of the pile, which, considering the vast gulf between the good films and the bad ones, isn't a terrible place to be. Dagon is definitely a film that deserves reappraisal, but I doubt it'll send anyone into a tizzy wondering why it hasn't gotten more recognition. I do think it's good enough to make horror fans smile.

Vestron Video's Blu-ray presentation of Dagon is decent. The film didn't look great to begin with, the vast majority of the film takes place in the dark, and that tends to either hide or expose a lot of flaws. In this case it dulls the proceedings, however, the image does benefit from increased sharpness to to the upgrade. While the HD restoration does right by the impressive practical FX, the low budget early '00s digital FX are not quite as lucky, and the increased resolution does make them stick out like sore thumbs.

This Blu-ray ports over a number of archival extras as well as providing new ones for fans to enjoy. Among the previous available extras are a pair of audio commentaries, one from Gordon and writer Dennis Paoli, and a second from Gordon and Godden; there is also a vintage EPK piece and some interviews with cast and crew from the film's release. New to this edition are a trio of twenty-ish minute interviews with Stuart Gordon (moderated by Mick Garris), Brian Yuzna, and Lovecraft bio author S. T. Joshi. Another interesting piece is a gallery of concept art from Richard Raaphorst, who would go on to direct his own film, Frankenstein's Army.

Vestron's Blu-ray upgrade of Dagon is a must-own for fans of the film, others might not be as impressed, but I think it's definitely worth a try. 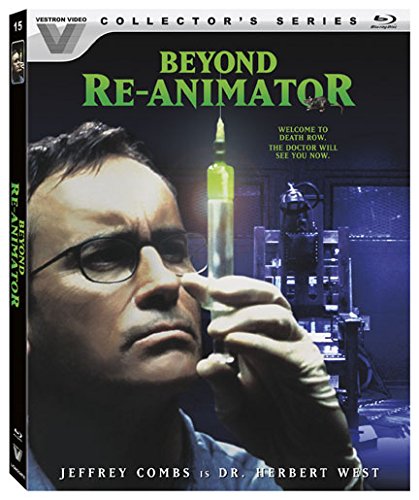 Yuzna had some of his biggest horror successes with the Re-Animator and its gonzo sequel, Bride of Re-Animator. So, when the time came that the producer had a bit of freedom to produce features he wanted to make, it was only natural that a third Re-Animator film would be in the mix. In 2003, Yuzna called up the series' iconic anti-hero, Jeffrey Combs as Dr. Herbert West, and production began on Beyond Re-Animator. For kids like me who grew up on the Re-Animator films, it was an incredibly exciting proposition to see our favorites back in action. Sadly, the end results left a bit to be desired, however, the film has aged a bit better than I expected. What disappointed me thoroughly fifteen years ago, is now almost quaint and charming. Who knew?

Thirteen years after the insane conclusion of Bride of Re-Animator, Dr. Herbert West is paying for his crimes behind bars. Gone, but not forgotten, West is approached by the prison's new doctor to help him continue the work West left behind on the serum he'd developed to conquer death. With an almost inexhaustible supply of captive subjects, West and his new counterpart Howard Phillips (cheeky), played by Jason Barry, get to work perfecting the cure for death. The experiments don't go exactly to plan, but then again, when have they ever?

Beyond Re-Animator is not only lead by Combs and Barry, but also features an impressive cast of Spanish talent, several of whom have gone on to higher profile work around the world. One face that Screen Anarchy readers might recognize now is Santiago Segura, the star of a number of Alex de la Iglesia films, including The Last Circus, Perdita Durango, and Dying of Laughter. Also appearing here is Elsa Pataky, a big TV star in Spain at the time of this film, Pataky has become a recurring player in the Fast/Furious series since Fast Five, as well as appearing in the notorious Snakes on a Plane.

I really hated Beyond Re-Animator when it first found its way into my VCR in the early aughts, but in rewatching it, my opinion has definitely softened. It's not a good film by any stretch, Yuzna is certainly a better producer than a director, and the modest budget certainly shows, but it's got a certain charm that keeps it afloat. Add to that the always reliable Jeffrey Combs, and I have to say, this could have been a lot worse. It isn't a foolproof recommendation, but if you haven't seen this third part of the Re-Animator saga, give it a shot, you might be surprised.

For whatever reason, Vestron's Blu-ray of Beyond Re-Animator looks, to my eyes, like a significant improvement over both its initial DVD release and the Blu-ray of Dagon. It could be the fact that the film is not shot entirely in the dark like Dagon was, but whatever the reason, it's worth checking out.

Similar to the Dagon disc, Beyond Re-Animator ports over a few existing extras from the existing DVD release. An audio commentary with Yuzna is back, along with a vintage making-of EPK, and a shockingly bad music video for Dr. Re-Animator's "Move Your Dead Bones". New to this release are more interviews with Yuzna, Combs, S. T. Joshi, and another gallery of concept art by Raaphorst.

If you liked Dagon, or are just a Re-Animator die-hard like me, Vestron's Blu-ray release of Beyond Re-Animator is worth checking out.

Do you feel this content is inappropriate or infringes upon your rights? Click here to report it, or see our DMCA policy.
brian yuznajeffrey combsre-animatorstuart gordonVestron Video