Fantasia 2018 Review: ROKUROKU Is A Confounding Low Budget Mess Of An Ominous Omnibus 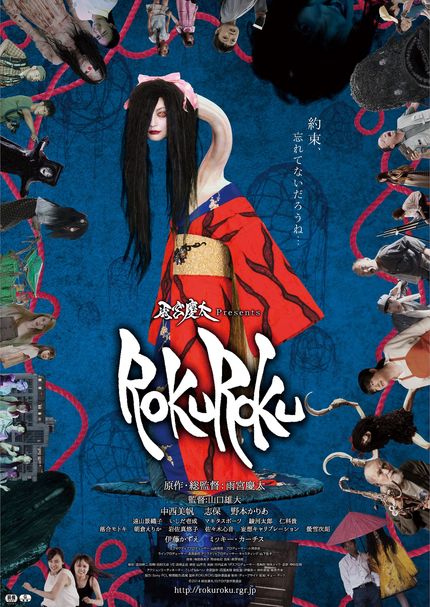 It's been several years since the gonzo Sushi Typhoon-style of Japanese horror/exploitation cinema was en vogue, but that doesn't mean there still isn't room for someone to bring it back. Among the most successful filmmakers of that period in the late '00s-early '10s was Yamaguchi Yudai. His work in the field predates Sushi Typhoon proper, and includes some of the most well put together bonkers Japanese features of the 21st century. His is a name that always gives me flutters when I see it in a program because it's become a mark of quality, but sadly his latest feature, Rokuroku: Promise of the Witch, doesn't live up to its own promise and instead falls flat.

Salarywoman Izumi lives with her grandparents. Grandmother spends her time taking care of her senile husband who blathers on about an invisible mysterious force stalking him from the yard. Izumi and her granny humor him, but after a phone call and shady meet up with a long forgotten childhood friend, strange things begin happening that make Izumi think maybe her grandpa's not so crazy.

This is the set up, but it's the only thing that even remotely makes sense in Rokuroku, an omnibus story of poorly realized tales of terror set around some classic Japanese folk tales and some creepy new concoctions. The story of Izumi bookends a set of short pieces that each focus a normal person in Tokyo being stalked and mangled by a different beast. Everything from umbrella Yokai, to an anthropomorphic killer cat, to a blade-limbed giddy spider-woman make appearances, but with less than ten minutes per sketch and no significant mutual connections, these mini-horrors don't make much impact.

Yamaguchi spreads the story of Izumi throughout the film, hoping to create some kind of coherent narrative, but by the time the conclusion rolls around, I'd seen enough nonsense, that the climax just seemed silly, rather than scary. The titular promise is never entirely explained, but it apparently has to do with Izumi and her friend, a first born child, and a snake-necked woman and her web. The scene is played for pathos, but by this point, any goodwill had been worn down to a nub and Rokuroku was more of an endurance test (even at a modest 91 minutes) than a gripping tales of terror.

I don't entirely blame Yamaguchi for the film's failure. The death of the Japanese gonzo style claimed many victims, though they were certainly complicit in their own demise. The glut of films from Yamaguchi, Iguchi Noboru, and Nishimura Yoshiro oversaturated an already overestimated market and fizzled out quickly. In the years since the label's hiatus began in 2012, these filmmakers have struggled to create anything of any substance, with their already paltry budgets being further shredded to accommodate the decreased demand.

The seams definitely show a lot more in Rokuroku than in his previous films, in spite of more readily available and affordable VFX. It just seems to serve as an indentifier of how far the mighty have fallen. Those earlier budgets weren't huge by any means, but the technical aspects of Rokuroku - from the glaringly obvious poor cinematography (I've seen much better output from films shot on iPhones), to the shoddily rendered FX - are far below Yamaguchi's usual standard. Yamaguchi's Yakuza Weapon was probably the apex of the Syshi Typhoon trend, and this is a significant step down.

I enjoy most of Yamaguchi's feature output. Yamaguchi was probably the strongest director of associated with the gonzo style, with his pre-Typhoon films like Cromartie High School and Battlefield Baseball being legitimately funny spoofs. Unfortunately with Rokuroku he's tried, for really the first time, to make a legitimately scary film. It didn't work.

Rokuroku: The Promise of the Witch