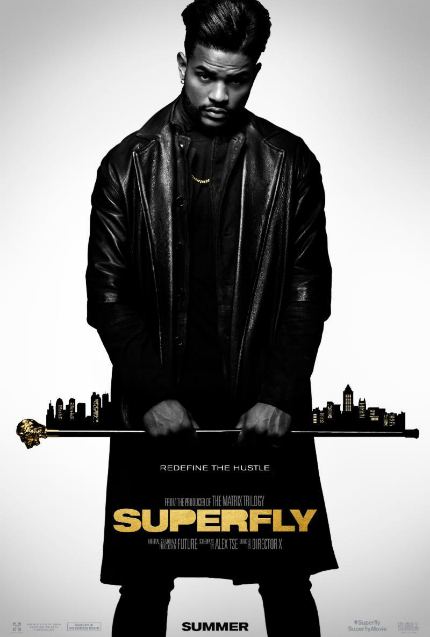 Hollywood's obsession with remakes of recognizable properties makes complete sense, from a business standpoint. Why not start with a title that people might know, at least by reputation?

In the case of Superfly, the original was released in 1972 as part of the first wave of what came to known as "blaxploitation," featuring Ron O'Neal as a cocaine dealer who wants to get out of the business with 'one more deal.' Under the direction of Gordon Parks Jr., it was flashy, it was snazzy, it was entertaining, and it made money.

The new version, helmed by Director X (known for his extravagant music videos), again looks flashy and snazzy, updating the setting and the details; now our hero, Youngblood Priest (Trevor Jackson), is into cryptocurrency! The new trailer provides more of the storyline -- Youngblood decides they need to make some kind of connection in Mexico in order to expand their business -- and that leads to trouble.

Jason Mitchell and Michael Kenneth Williams, as Youngblood's revered mentor, also star. Alex Tse (Watchmen) wrote the script. Mark me as officially ... intrigued by what looks like a big-screen music video with some very good actors.

Check out the new trailer below. The film opens in U.S. theaters on June 15.

Do you feel this content is inappropriate or infringes upon your rights? Click here to report it, or see our DMCA policy.
Director XJason MitchellLex Scott DavisMichael Kenneth WilliamsTrevor Jackson