Now on Blu-ray: Severin Celebrates the Ladies in EATEN ALIVE, EMANUELLE & THE LAST CANNIBALS, and VIOLENCE IN A WOMEN'S PRISON

Severin Films are heroes among home video distributors. From releasing classics Ozploitation films, to sleazy Italian horror gems, to restoring some of the greatest cult films the world has to offer; they never sleep and we are all the better for it.

In recent months they've chosen to celebrate the talented women of Italian exploitation, resulting in this trio of fascinating and entertaining films from legendary filmmakers Umberto Lenzi, Joe D'Amato, and Bruno Mattei. A pair of cannibal films and a rowdy Women-in-Prison classic are put under the microscope, check out the details below 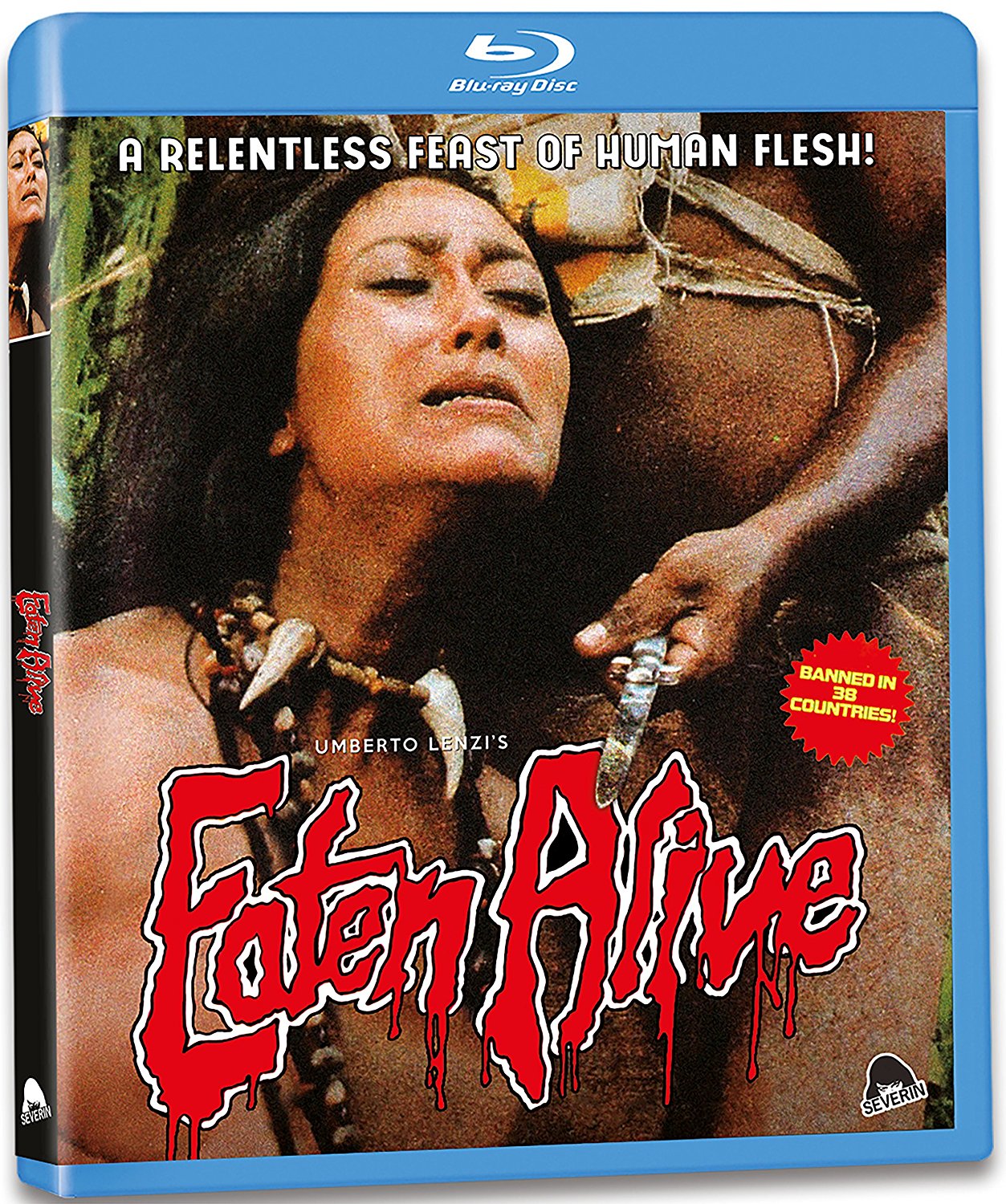 First up in our triptych of titillating terrors is Umberto Lenzi's Eaten Alive, starring the irrepressible Me Me Lai. Lenzi began the Italian cannibal craze in 1972 with his gruesome film, The Man From Deep River. That film, which borrowed liberally from Hollywood western A Man Called Horse, began one of the most disgusting of all of the Italian horror subgenres that would go strong for a decade before petering out in the early '80s. Eaten Alive would reunite the male and female leads of the earlier film, Lai and Italian macho man Ivan Rassimov (All the Colours of the Dark, The Strange Vice of Mrs. Wardh) in a new, more prescient film, this time with the benefit of hindsight on a decade of gross-out films to guide their process of making one of the most disgusting films of all time.

One sexy-sexploitation film, one part mad religious cult, and one hundred parts offensive native-sploitation madness, Eaten Alive is the story (as were many) of a westerner drawn to the Amazonian jungle in search of lost family members, only to find pain and suffering at the hand of savage natives with a taste for human flesh.

This impetus was not unfamiliar to Italian filmmakers, who used it for pretty much every cannibal film leading up to this one, but Lenzi did have some tricks up his sleeves that make Eaten Alive worth checking out. Most notably there is the existence of a Jim Jones' styled cult, led by Rassimov, in the jungle to set it apart from the other cannibal movies as well as being in incredibly poor taste - another hallmark of Italian exploitation - since the film was released only a few years after the Jonestown tragedy.

Long story short, Eaten Alive is far more entertaining and engaging that it has any right to be. Even more than Lenzi's previous attempts at the genre, which include the above-mentioned Deep River and the appalling (and truly grotesque) Cannibal Ferox. There is enough sex and violence to make even the most hardened gore-hound smile, and enough plot and story to surprise the newcomer to this surprisingly fruitful genre. As little as I think of Lenzi as a filmmaker - I've made no apologies for my position that he was largely a hack - Eaten Alive is a genuinely entertaining film that deserves more recognition than it's gotten.

For its Blu-ray debut, Severin Films has pulled out all the stops on Eaten Alive, a brand new restoration brings into stark relief the elements that make this gut-churning gross-out work so well. The Blu-ray looks surprisingly solid with every disgusting moment of intestine chewing sparkling like never before. Severin have also included three audio tracks, English, Italian, and Spanish on the disc. Spanish is the most problematic, but the other two sound fine, and since the film was post-synced, it's truly up to you how you'd like to experience this gem. I went with English the first time around and am completely satisfied with the result, the dialogue is clear, FX come through, and there is minimal hiss and drop-out on the main track. Can't beat that.

Severin, as is their wont, go all out on the bonus materials for Eaten Alive. Most enticing is the feature length documentary Me Me Lai Bites Back, a documentary on the star of this film and several other cannibal gems from the '70s (Deep River, Jungle Holocaust) whose work has found new life in recent years. The eighty-minute doc features experts from around the globe, including Screen Anarchy contributor Shelagh Rowan-Legg and Sitges Fantastic programmer Mike Hostench in a truly informative and reverent feature that is worth the price of admission. On top of that there are interviews with Lenzi, production designer Antonello Geleng, Rassimov and co-star Robert Kerman, and a 2013 Q&A with Lenzi from a festival appearance, making this a definitive edition of a film that no one thought would ever receive such a release.

Eaten Alive is a must-see for cannibal film fans, and Severin has set the bar high for any future attempts at a release. Highly recommended. 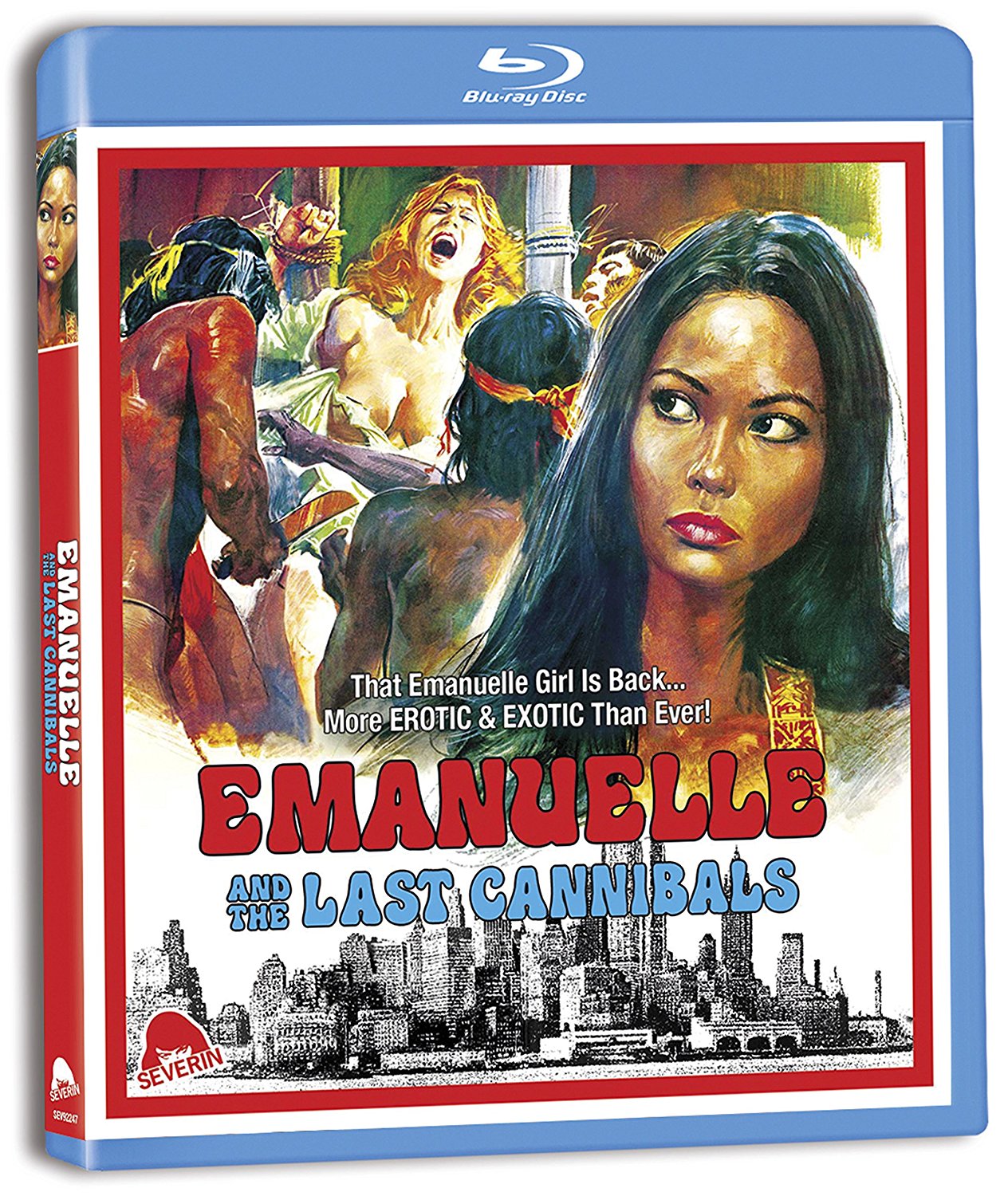 While embedded for in a mental asylum for an expose, fearless reporter Emanuelle witnesses a bizarre cannibalistic attack on a nurse from a patient recently picked up from the edge of the Amazon rain forest and decides to investigate. She quickly rounds up the funding from her newspaper and finds an expert on primitive tribes (Gabriele Tinti) who might practice this savagery and heads off to South America hoping to bring back evidence of this archaic practice. She is joined by a guide (Monika Zanchi), a nun (Annamaria Clementi), and a motley crew of treasure seekers on her journey into the depths of the rain forest. The team traipses through the dense brush, only to find themselves the victims of savage cannibal attacks right before they find what they're looking for.

Joe D'Amato's film is sleazy trash that fans of Italian exploitation will eat up with a spoon. There is ample sex, gore, and trashy dialogue (often re-recorded in the most awkward fashion possible) to keep everyone on their toes and Emanuelle and the Last Cannibals moves quickly enough to avoid dull spots in the narrative. When popping an Emanuelle film into the player, one should expect to find her getting into sexual shenanigans at every possible opportunity and this film doesn't disappoint. Laura Gemser is a real trooper, presenting herself as an object of affection and lust for both her friends and enemies alike, Gemser makes quite an impression on these tribals, and us as we follow her journey into savagery.

Emanuelle and the Last Cannibals made its Blu-ray debut in the UK a couple of years ago through 88 films, but the Severin Films release tops that one by a country mile. Not only is the new restoration by Severin revelatory, there are also numerous interviews and bonus materials from Severin's partners at Freak-O-Rama to keep fans watching. We get a half hour interview with composer Nico Fidenco, along with interviews with actresses Clementi and Zanchi that provide a ton of anecdotes and context, along with additional interviews with Donald O'Brien (Zombi Holocaust) and an audio interview with Gemser, herself.

If you're a fan, or even curious about Emanuelle and the Last Cannibals or any of Gemser's Black Emanuelle films, this is a must own disc. Definitely recommended. 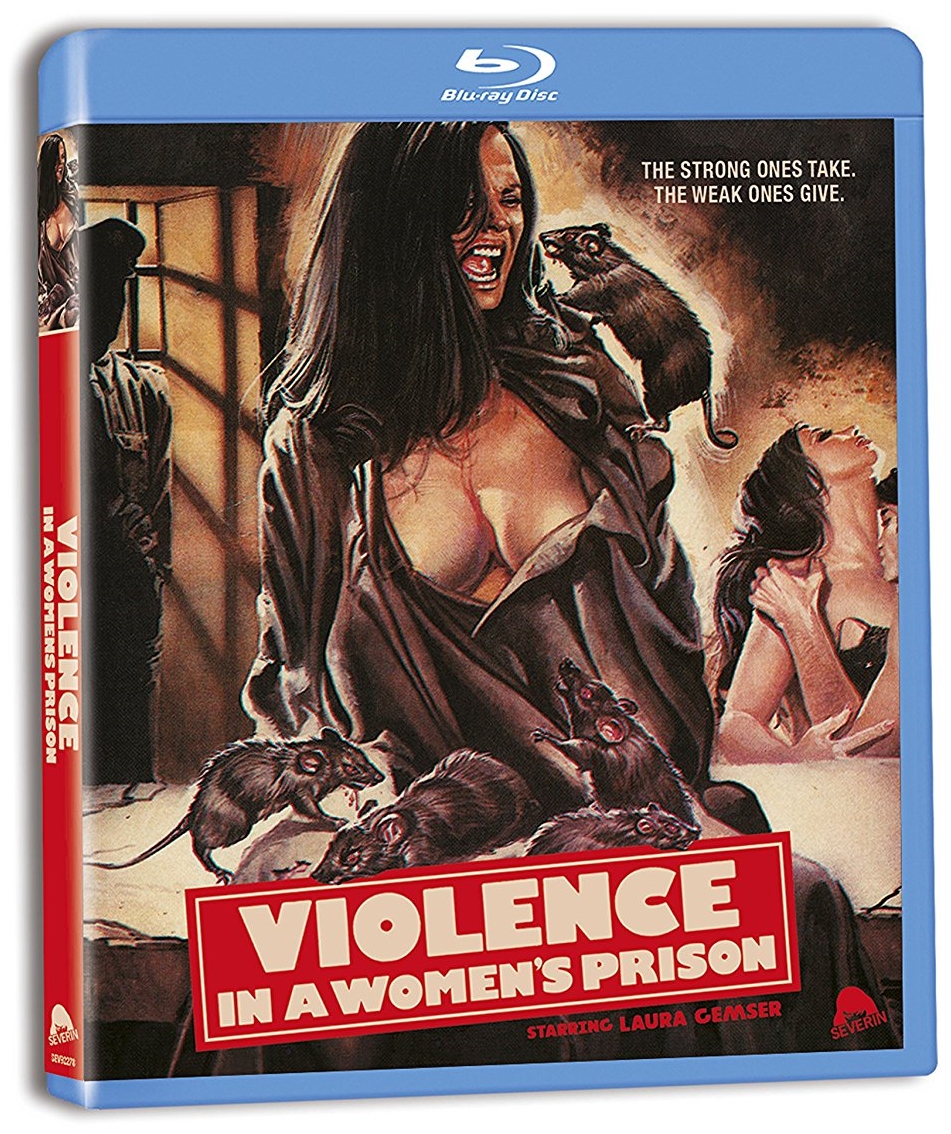 Finally, we reach Laura Gemser's Violence in a Women's Prison, AKA Caged Women, AKA Emanuelle in Hell, directed by notorious filmmaker Bruno Mattei (Rats: Night of Terror, Robowar). In this very unofficial installment of the Black Emanuelle series, the titular journalist sends herself to a notorious women's prison in order to document the goings-on inside. However, she gets more than she bargains for and instead of a juicy story, she'll be lucky if she escapes with her life!

Those who know something about the Emanuelle or Black Emanuelle films will know that the idea behind each of these films is to get our fearless heroine out of her clothes and into sexy situations as soon and as frequently as possible. Violence in a Women's Prison nearly bucks that trend by having Gemser suffer immensely at the hands of the prison power structure and her ward-mates for nearly an hour, leaving the sleazier fans to wonder if they'll ever get what they want out of the film. There is, however, no shortage of salacious scenery as the lady convicts submit to their sapphic desires on a regular basis as well as taunting the nearby men's prison at every opportunity. However, Emanuelle is - for the first hour or so of the film - relegated to being the recipient of torture on a scale previously unheard of in one of these films.

Gemser's Emanuelle is forced to fight back against the warden and prison guards with any weapons she finds handy, which (in one of the series' most disgusting moments) includes a bucket full of poop. For her transgressions, Emanuelle is punished brutally, eventually finding herself at the mercy of the prison's doctor, who is thankfully not only sympathetic to her plight, but also damned sexy and eager to fulfill her every carnal desire.

Violence in a Women's Prison is among the sleaziest in an already incredibly sleazy series, making it prime fodder for Women-in-Prison film fans. If any of my descriptions sound even remotely intriguing, allow me to assure you that I've only scratched the surface of this delightfully depraved piece of cinema.

Severin Films new HD presentation of Violence in a Women's Prison is a thing of beauty. Every rat bite, every piece of poo flung, and every bead of sweat gain new levels of detail in comparison to previously available editions. The film is presented in both an English language and Italian dub, though since both are post-synced, I stayed with the English language version to help me immerse myself in the disgusting experience.  The disc is also presented with a half hour interview with co-writers Claudio Fragasso & Rossella Drudi (Troll 2, Robowar) that is well worth checking out, as well as a brief archival interview with Bruno Mattei.

I've suffered through more Bruno Mattei films in my life than I care to remember, but Violence in a Women's Prison certainly sits near the top of the heap when it comes to flat out entertaining fruits of his disgusting loins. This one is definitely recommended.