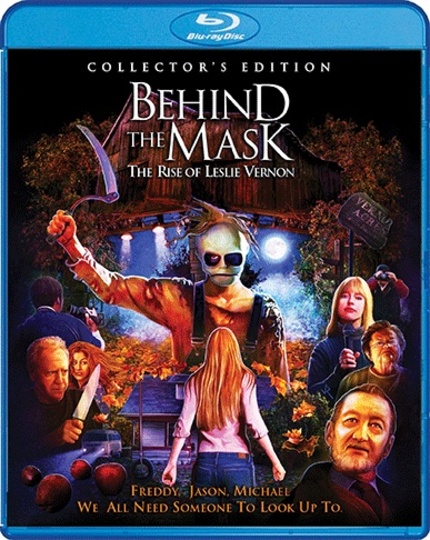 More often than not, a film won't get the acclaim that it should, even if it builds a fan base. Such is the case with Behind The Mask: The Rise Of Leslie Vernon.

Like Scream in the sense that it's a meta film, Behind The Mask follows a student journalist team as they follow the boisterous serial killer Leslie Vernon (Nathan Baesel). Led by interviewer Taylor (Angela Goethals), the team tows the line of what's moral and lawful and what is aiding and abetting this killer. Their curiosity gets the best of them before the decide to try to help the teens that Vernon is stalking, but is it too late?

Is Vernon the next "great" serial killer or monster in the vein of Freddy, Michael Myers, or Jason? This films asks us to imagine that those figures exist in real life, and that this "hopeful" can join their ranks, much like any athlete who trains endlessly for the Olympics. And you know what? It works!

In this intelligently written film, there are fun cameos by: Zelda Rubenstein who plays a helpful librarian with intimate knowledge of local legends; Scott Wilson, who plays Vernon's retired mentor; and the always-great Robert Englund who's the "Ahab" to Vernon, Doc Halloran (an obvious homage to The Shining).

The story is a good time, not just due to the writing, but the performances of those previously named. Baesel himself has terrific timing, and it feels odd that he's not present in any interviews conducted for this release.

The Blu-ray itself shows a fantastic picture and perfect sound, as if the film was brand-new, not 12 years old. (Which is young in film history, comparatively.)

The bonus features aren't as interesting as I'd like them to be, but they do reveal that the crowdfunding campaign to get a sequel off the ground was not sucessful, and so they created a comic book from the sequel's script. There's an interview with the artist here, which goes into that process slightly.

Intrigued? Check out the trailer below and learn more at Scream Factory's site here.

Do you feel this content is inappropriate or infringes upon your rights? Click here to report it, or see our DMCA policy.
Behind The Mask: The Rise Of Leslie VernonNathan BaeselRobert EnglundScott GlossermanScream Factory

More about Behind The Mask: The Rise Of Leslie Vernon