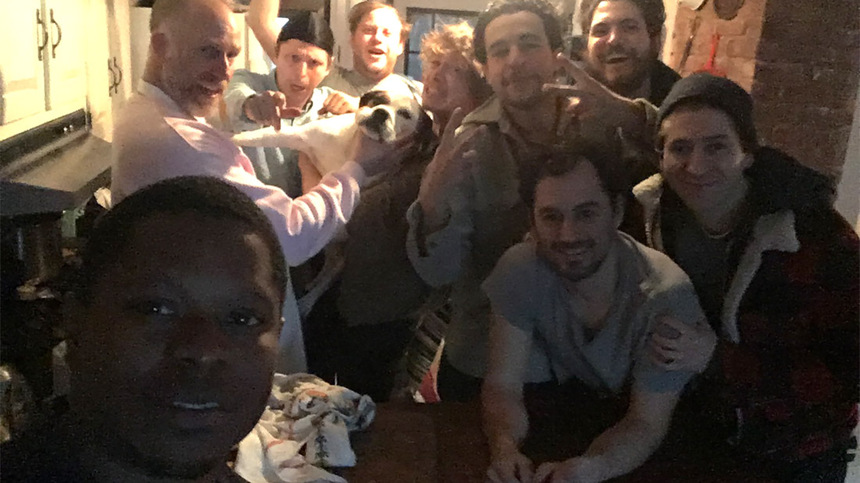 Proving that ostracized characters with odd outlooks on life can be effectively disturbing in any language, Chilean director Sebastián Silva has made a career, in both Spanish and English, out of stories focused on people pushed to the edge – sometimes by outside factors and others by the circumstances they’ve created for themselves.  In his newest effort, Tyrel (an American production), he aims to explore race relations in his adoptive country, a subject that he is clearly observing as an outsider.

Inspired by a random photo he received of a group of friends comprised of only white men with the exception of one African American guy, Tyrel is less direct than Jordan Peele’s Get Out in its exploration of people of color’s experiences. What both films share, however, is that the source of anxiety for their black protagonist is a group of white people that on the surface appears to be liberal, pro-Obama, and anti-Trump. Yet, underneath the façade of progressiveness, they still showcase belief and behaviors that trivialize the concerns and cultures of others, in Silva’s Tyrel, specifically the sense of danger this creates is never always ambiguous, and all the more terrifying for it.

A weekend away from his Puerto Rican girlfriend and her family, starts off on the wrong foot for Tyler (Jason Mitchell), which is the character’s actual name, who we meet as he pushes a car in the middle of a snowy forest with his best friend, Johnny (Christopher Abbott). Following an encounter with a local white woman (Ann Dowd) who offers her help, Tyler and Johnny meet up with the latter’s pack of friends: a bunch of white dudes. Immediately after he introduces himself as Tyler, Johnny’s friends begin referring to him as Tyrel, what they seem to think is more appropriate for a black man. This racist micro-aggression is played off as an honest mistake and goes on just for a few moments, so Tyler lets it go.

The white wolf pack includes Caleb Landry Jones as Pete, who could easily be reprising his role in Peele’s Oscar-nominated film; there is also Dylan (Roddy Botum), the one gay man in this bro fest, and Nico (Nicolas Arze), the Argentine homeowner who is hosting the gathering. Note that though he is Latin American and a foreigner, he is ethnically more European than indigenous, just like Silva, so he fits much better into the picture of whiteness than Tyler does. More men are added eventually as the weekend unfolds. Two more white men join and spend the entire weekend talking about their recent trip to Cuba and the sacred stone they stole known as an eleguá.

Alcohol soon reveals itself as the binding agent in the male bonding on screen. During night one, a silly game that requires participants to do their best version of a funny accent evidences the acceptable casual racism in the group. Afraid to bring it up as a big deal, Tyler retreats to a separate room and pretends to be asleep. Debauchery continues, but Johnny notices Tyler’s behavior. Abbott does a great job at delivering a performance that comes across as sincerely worried about his friend’s uneasiness among white strangers, but at the same unwilling to address the source of it. It’s a guys’ trip, and no one should be that sensitive right?

By now a fixture in Silva’s films, Michael Cera returns once more to play Alan, the eccentric and wealthy friend whose wild antics captivate Tyler’s attention. Probably because he calls out the others’ bullshit and is not interested in fitting in, Tyler believes he is found an ally in Alan. On the other hand, Pete, the birthday boy who pushes the boundaries of political correctness to insensitive limits, antagonizes Tyler, or at leas that’s how he perceives it.

It’s all a subjectivity game here: what the white men think is not offensive or threatening makes Tyler feel in an extremely precarious position. In one instance during night two, once Alan has arrived, the men choose to break a Donald Trump piñata using a machete. One’s first reaction to their innocent but derange pursuit is to think this will end badly for Tyler. He shares that thought. Like in the director’s previous features such as Nasty Baby or his Spanish-language breakthrough, The Maid, unexpected horrors are never mentioned by name, they hide between the lines and emerge to make us uncomfortable and question the tone of the film we are watching.

Mitchell doesn’t have the benefit of being in an obvious genre film as Daniel Kaluuya doe. The actor’s take in Tyrel is entirely internal. His fears and reservations about his companions are preemptive and fueled by long-brewing mistrust, of course, these guys are not doing anything to change his feelings positively, on the contrary they confirm them. Near the end, Tyler comes into contact with another black man in the area (Re g E, Cathey) and his son, and in an unspoken exchange they both know how the other is going through, and that brings balance to narrative and reassures Tyler he might get through the night.

Silva captures the ordeal in the handheld and hyperrealist manner that he’s used in all of his other tales. He refrains from over-stylizing the visual language of story and lets the awkward interactions at hand do all the heavy lifting. It works. People of color in this country will immediately related to Tyler’s struggle to fully believe in the white men’s intentions, and while there are times where we might be prompted to laugh, the lingering tension brings us back to the reality of the events.

Silva doesn’t have all the answers, and his take on race in America is not definitive, but he deserves credit for being able to look straight into one this country’s unhealed wounds and make something that is sharply written and insightful. Tyrel is a great conversation piece for when you want to stirr up the topics we really need to address, instead of banal small talk. It's required viewing for all those who think of themselves as preachers of inclussion, but who don't practice what they preach.

Do you feel this content is inappropriate or infringes upon your rights? Click here to report it, or see our DMCA policy.
Sundance 2018TyrelSebastián SilvaChristopher AbbottCaleb Landry JonesMichael CeraJason MitchellDrama