Now on Blu-ray/DVD: THE BLOOD SPATTERED BRIDE and LOVERS BEYOND TIME From Mondo Macabro

Cult film fanatics know that there are a few home video labels that we can count on to deliver some of the oddest gems in the cinematic underverse, and Mondo Macabro is one of them. Far from beholden to the most wanted lists of collectors, Mondo Macabro seems to revel in the thrill of discovery, commonly releasing films that are not on anyone's radar and almost always wowing in the process. 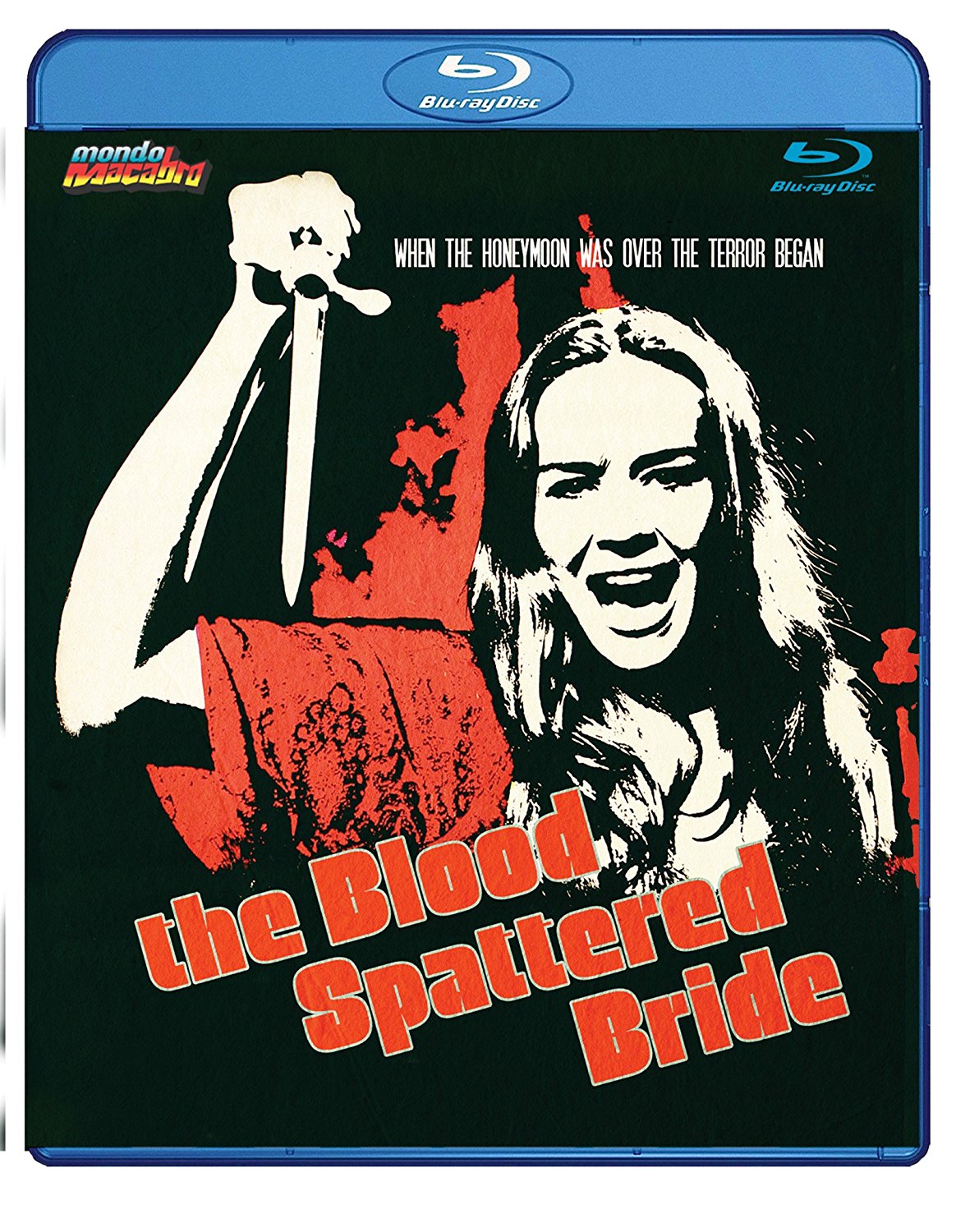 Susan, a virginal young bride, is whisked away to a remote manor in the north of Spain by her older, overbearing new husband. She feels uneasy with her surroundings, and even more uneasy about the particular sexual demands of her new partner. As she begins to explore her new home, she soon discovers a cache of paintings, presumably of female members of her husband's family, but something isn't quite right about them. She is soon visited by a vision of a woman all in white, and wherever she goes, blood follows. Susan's life changes once she falls under the mysterious woman's spell, and becomes The Blood Spattered Bride.

Vicente Aranda's classic horror tale is based on the well-trodden story of the vampire Carmilla by the Irish author, Joseph Le Fanu. The book has been adapted numerous times over the years by filmmakers like Carl Theodor Dreyer (Vampyr), Hammer Films (The Vampire Lovers), and many more, but few manage to wring the same kind of social and emotional truth from the story as Aranda's 1972 version. Packed from beginning to end with delightfully violent sequences of murder and a surprising amount of near-explicit sexuality, The Blood Spattere Bride stands on its own two feet as a classic of the period, made even more exceptional by having been produced in the middle of the fascist Franco regime.

Mondo Macabro brings The Blood Spattered Bride to Blu-ray for the first fime using a new 4K transfer of the original negative, resulting in a beautiful presentation of a film that truly deserves this kind of attention. The image is bright and clear, with plenty of shadow detail and fine detail. Mondo Macabro give us both English and Spanish language audio options, both of which sound quite good.

The company did not skimp on the quality extras, and they are definitely worth the price of admission all on their own. We get a pair of interviews with actor Simon Andreu, as well as an interview with cinematographer Fernando Arribas, and EuroHorror author Jonathan Rigby. This series of interviews is incredibly helpful it both helping to provide context for the film and the social restraints under which it was made, as well as for production anecdotes and expanding our understanding of the talents who made it and where their careers came from and went before and after the film. However, the real treat on this disc is an audio commentary from Kat Ellinger and Samm Deighan, both of Diabolique Magazine and the Daughters of Darkness podcast, whose mountain of knowledge is both incredibly overwhelming and wonderfully informative. This pair have now been featured on a couple of my favorite commentary tracks and I have begun to get excited any time I see them as contributors - either separately or together - on upcoming home video releases. Even though each have their own distinct voices, Ellinger often focusing more on background and social impact, while Deighan tends to do a bit more analysis using the film as text, they are equally adept at analysis from any angle and greatly enhance the experience of the film. Everyone: keep using them for your commentaries!

This is an exceptional disc, in no small part thanks to the contributions of Ellinger and Deighan, and I highly recommend The Blood Spattered Bride on Blu-ray from Mondo Macabro. 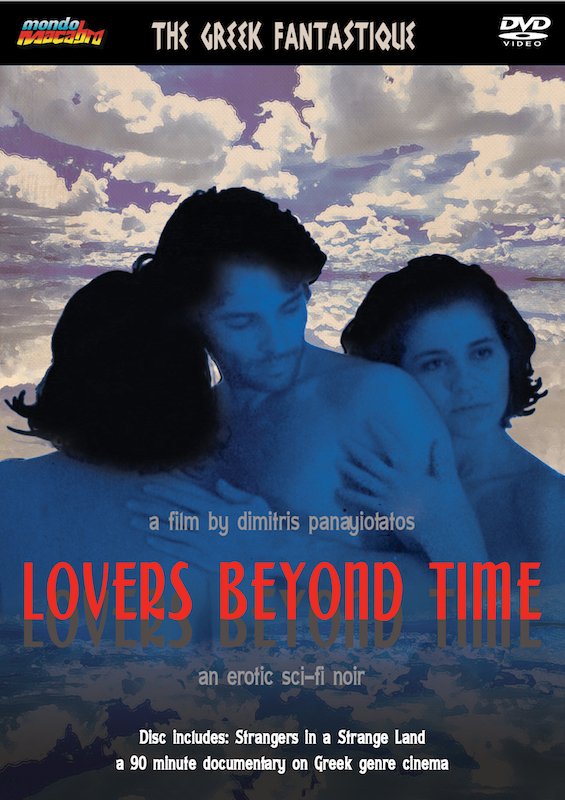 Lovers Beyond Time opens with a break-up. Sylvia and Angelos are a flame that burned too bright to last, and when Sylvia decides that it's too hot for her, she breaks it off, much to Angelos' disgust. The film resumes a few years later with Sylvia trying to pick up the pieces after her ex's death by starting a new life with a doctor. Out of the blue her life takes a shocking turn when people around her start to die and she starts to feel as though she's being groped and molested in the most inappropriate places, often while she's alone. Walking down the street, doing her job at the record company where she works, even driving down the highway in her car, Sylvia experiences intense phantom orgasms as though she's having sex with a ghost. When her record executive boss tells her to track down a mysterious musician that he thinks will be the next best thing, her life gets even stranger. Tron-style science fiction meets crazy Skinemax love scenes populate this one of a kind thriller with an ending that you'll never see coming.

Mondo Macabro's DVD release of Lovers Beyond Time isn't going to win any awards in the presentation department, but for a film that almost no one even knew existed, the disc certainly gets the job done. The image is reasonably clean, though its SD origins are quite evident throughout, no one will be mistaking this for a 4K restoration any time soon. However, for a rare film like this, it's okay to grade on a bit of a curve, and I can't say I was terribly disappointed, but moderating one's expectations is probably a good idea.

Almost as important as the feature, in this case, is the 90-minute documentary "Strangers in a Strange Land" that charts the evolution of Greek genre cinema from the '60s through the '00s. It's a lot to take in, and most of it doesn't look terribly interesting to me, but as far as providing context goes, this doc is essential. We also get an interview with director Panayiotatos, and a TV short titled The Last Meal from the same director as part of the package.

Lovers Beyond Time is much less of a "home run" than The Blood Spattered Bride for me, but it definitely has its merits. If nothing else, it has piqued my interest enough to keep going back to Mondo Macabro's Greek releases and has my anticipation running high for their next one.