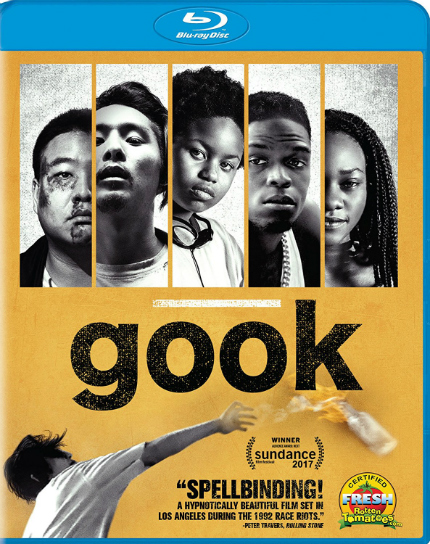 Recently I had the chance to talk with producer James Yi, speaking on behalf of and with director/writer/actor Justin Chon on their feature film, Gook.

After premiering at Sundance (winning the NEXT award), the film won Best Feature, Best Director and Best Actress (Simone Baker) at the Los Angeles Asian Pacific Film Festival. It was recently nominated for an Independent Spirit Award.

Released on Blu-ray on December 5, you can purchase Gook right here.

Timothy Tau: Congrats on winning the NEXT award at Sundance and various awards at LAAPFF, SIFF and other film festivals (and for being acquired/distributed by Samuel Goldwyn as well as a theatrical opening a few months ago) and also for being nominated for an Independent Spirit Award. How did the initial idea for the film and screenplay begin?

James Yi: Justin first brought up an idea for the film four to five years ago but I know he has been thinking about a film like this well before he mentioned it to me. He was 11 when his father's shoe store was looted during the LA Riots/Uprising and it made a huge impression on him as a child.

What were some of the considerations, inspirations/influences to make the aesthetic choice of using B&W for the film? I got an almost Godard, Peckinpah and Cassavetes vibe (mixed with Kevin Smith's CLERKS and John Singleton's BOYZ N THE HOOD), which seemed to add another layer to the storytelling of the film, with a slight mood of alienation as well -- and it almost felt like what Jim Jarmusch did with the Western genre with DEAD MAN to make a film from a genre that is traditionally in color B&W instead. The character of Eli also seems interesting as a rebel but who is also picked on by society and marginalized; were there any inspirations for Eli?

The film that most influenced Justin's vision was LA HAINE, directed by Mathieu Kassovitz. And growing up in the 90's and 2000's, CLERKS, DO THE RIGHT THING, BOYZ N THE HOOD, all naturally had some influence in the style. And we are both fans of French Noir and New Wave and Cinema Verite, so that naturally bleeds in also.

As for Eli, I see a lot of Justin himself. And the voice of many oldest brothers, five generations of young Korean males that had a lot of built-up frustration and feelings of displacement, such as myself.

The acting in the film is amazing, with perhaps the standouts being Simone Baker, Curtiss Cook Jr., yourself, David So and perhaps most of all your father Sang Chon, who creates the compelling character of Mr. Kim. How did Justin work with the cast as a director?

All I will say is, Justin's greatest strength as a director is crafting masterful performances from his cast. I have worked with dozens of directors and Justin is by far the best at it. He has a special connection with his cast and I am fortunate to work with him.

And as producer, I could not be happier with the cast we had for the film. Everyone was very talented, dedicated, and supportive throughout.

I really hope this film can be looked at in the future as the fertile grounds that help launch Simone, Curtiss, and David So's careers.

The title is provocative yet ironic, as Eli remarks in the film that the word for America (Mi guk) is both "beautiful country" and a racial slur. Did you experience resistance to the title and if so, what made you determined to fight and keep it?

Surprisingly we did not get as much push back on the title as we expected. Our distributors saw the film and embraced it fully.

I think most people, after they watch the film, understand the context of why we titled the film Gook; it's been a positive talking point for us.

Gook is still an active word in the Korean language, meaning soup or country. The word was bastardized to turn it into a slur word and this is our attempt to help teach people about the word and reclaim it as our own again.

In terms of logistics, how long did it take to shoot? What camera was the film shot on? What type of other special equipment (e.g. dollies, steadicam, etc.) were used during shooting? What did the editor use to edit the film? Where was the film shot (location-wise)? Any interesting or crazy on-set stories?

The film was a challenging shoot but we were able to get 23 days in the can. We shot the film on a Red Dragon using vintage anamorphic lens. This is how we were to get closer to a classic film look.

As for special equipment, we did use some such as dollies and a lift but most of the film was shot hand held by our amazing cinematographer Ante Cheng. He literally carried the film in his hands and really made the film look better then we could have ever hoped for. I truly feel it's a beautiful masterpiece considering how little resources he had to work with.

The film was shot in Gardena, California, which is not far from Paramount and still retains a lot of the 90's LA looks and feel. We were fortunate enough to find an abandoned car lot and our production designers, Jenna Serba and Sharon Roggio did a miraculous job of building the shoe store from scratch.

As for a crazy story, our style and set was so raw that the night we shot the dramatic climax scene of the film, half a dozen Gardena police cars rushed our parking lot because they thought there was a real confrontation going on.

Being among its leading voices, where do you see Asian American cinema going? Where would you like to see it go?

My personal hope is that Gook will help inspire the next wave of Asian America cinema to expand their horizons in film style and story telling technique. I would really like to see future filmmakers really push the artistic and creative boundaries and take more stylistic risks. Pushing the creative and storytelling boundaries I feel is the most impactful way we can make noise in the industry and bring more attention to the Asian American identity and agenda.

What's next for you and Justin acting/directing/producing wise? What is the next film you want to make (or have already started making or planning)? If you had unlimited resources, what is your dream project as a filmmaker to create?

Justin and I have some long term developments in the works but they are too early in the process to share. We are always throwing ideas back and forth and intend to work together again in the future for sure.

And I'm currently developing a documentary about the Panama Hotel (Seattle) and its unique connection to the Japanese Internment Camps of WWII. Also releasing a new version of my documentary, Dark Progressivism, about the history of LA Graffiti and its origins in gang writing and tattoos, at the end of the year.

As for myself, I'm always playing with the idea of directing some day, so if I had unlimited resources, I would write/direct a series of sci-fi short films/web series that would be developed into a feature.