Exclusive Clip From GOOK: It Was Such a Beautiful, Busy, Normal Day, Until... 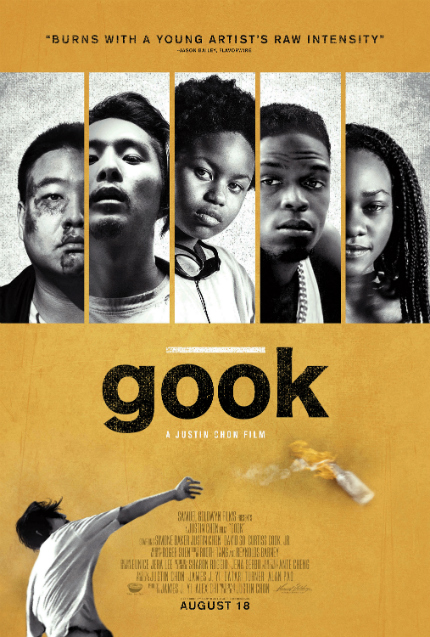 It was such a beautiful day.

In our exclusive clip from Gook, 11-year-old Kamilla (Simone Baker) helps out the brothers Eli (Justin Chon) and Daniel (David So) during a busy day at the shoe store they own. The scene has a cheerful, fun energy to it, the camera moving around in rhythm with the brothers calling out model numbers to Kamila, who then knows which shoes to grab for the neighborhood customers.

The moment becomes poignant in memory later on in the day, when developments take place that will shake everyone in the store and far beyond.

Gook takes place on April 29, 1992 -- the day the LA riots started and the day the Rodney King verdicts were announced. Eli and Daniel, two Korean American brothers played by Justin Chon and David So, own a struggling shoe store and have an unlikely friendship with Kamilla, a streetwise 11-year-old African American girl, played by new actress Simone Baker, who ditches school to hang out with them, thus, creating their own "family."

Eli stresses about the store, and Daniel tries to have a good time. It's just another typical day at the store until the Rodney King verdict is read and riots break out. With the chaos moving towards them, the trio is forced to defend the store while contemplating the future of their own personal dreams and the true meaning of family.

With the ongoing discussions of race in America today, Gook is that dialogue starter asking the question: Where are we now, even 25 years later?

Gook will open in Los Angeles, California, at the Arclight Hollywood and Regal LA Live Stadium on Friday, August 18, 2017, via Samuel Goldwyn Films. It will then expand to select theaters throughout the U.S. on Friday, August 25.

Visit the official Facebook page for more information. And please watch the clip below.

Do you feel this content is inappropriate or infringes upon your rights? Click here to report it, or see our DMCA policy.
David SoJustin ChonSimone Baker