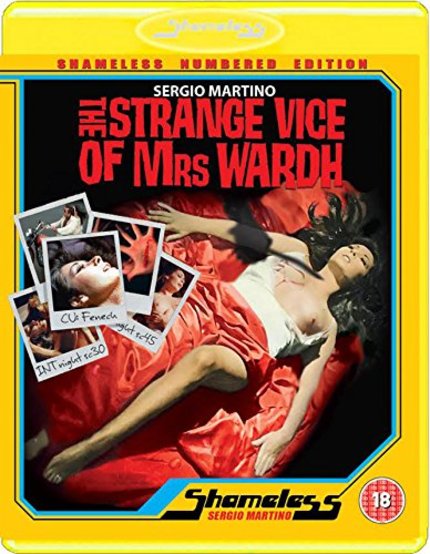 The UK's Shameless Films seem to have a particular fondness for the torture and torment of Italian film siren Edwige Fenech at the hands of giallo legend Sergio Martino; but then again, I can't really blame them. Fenech became one of the most recognizable - and indisputably beautiful - faces of the '70s giallo boom in Italy when she arrived on the scene. She starred in many a classic from this underground subgenre that has only recently begun to receive the kind of notice it deserved.

While she worked with some of the most notorious filmmakers in the business in films that went on to become cult classics, like Andrea Bianchi's Strip Nude for Your Killer and Mario Bava's Five Dolls for an August Moon, it was her collaborations with Martino that linger as possibly her best work.

The Strange Vice of Mrs. Wardh was the first in a highly regarded trilogy of Martino-Fenech productions - Wardh, All the Colours of the Dark, Your Vice is a Locked Room and Only I Have the Key - that saw poor Edwige tormented over and over again by men seeking to destroy her, and often succeeding. Joined in each of the films by the burly and sinister presence of Ivan Rassimov, Fenech played the hell out of the damsel in distress in each of these films, but she really only got to have her cake and eat it, too in Wardh.

Julie Wardh is a wealthy American socialite living in Italy as the wife of an industrialist who spends much of his time away for work. She uses her dreadful marriage to escape from the memories of a torrid affair with the sadist Jean (Ivan Rassimov), but she can only distract herself so much. In order to further push Jean from her mind she begins an affair with a handsome playboy named George (George Hilton), but soon enough even that begins to crumble when the news of a serial killer stalking beautiful women hits far too close to home. Soon Julie is trapped as the pawn in a horrific and cruel gaslighting game from which she cannot escape. She thinks she just paranoid, but maybe they really are out to get her.

Martino's giallo output with Fenech is among his strongest. While All the Colours of the Dark carried a very heavy Rosemary's Baby influence, Mrs. Wardh was much more of a straight-forward thriller and lends itself better to comparison with their later collaboration, Your Vice is a Locked Room and Only I Have the Key, based on the theme of emotional manipulation at the expense of fragile female emotions. Later on in his career, Martino would make what has become - for me - one of the defining films of the later giallo cycle with Torso, which started to strip away the emotional complexity in favor of increasingly brutal sex and violence. It's no slouch, mind you, but these earlier films from Martino, Argento, Fulci, Bava, and the like really spent more of their energy on developing reasons for the slaughter rather than attempting to justify the slaughter with reasoning as an afterthought.

The Strange Vice of Mrs. Wardh was released right at the beginning of the big giallo boom in 1971, and it still feels fresh even today. The film explores the complex emotions of this women who nerves have been shattered by a series of men who seek to keep her under their thumbs for their own purposes. Fenech may not have much agency of her own, but she still manages to cut an imposing figure and it's impossible to ignore her piercing stare.

If you're a fan of giallo at all, or even curious, The Strange Vice of Mrs. Wardh is an interesting film that goes beyond the films that would later come to define the genre. As I mentioned in my previous review of All the Colours of the Dark, Martino is a filmmaker that really never got his due, but Shameless Films definitely deserve a pat on the back for not letting his films die with releases like these.

Shameless Films' Blu-ray release of The Strange Vice of Mrs. Wardh is a definite improvement on the previously available home video editions. The colors and textures improve with an HD upgrade from both the Shameless DVD and the American disc from the out of print No Shame disc. Martino wasn't as exuberant about his color schemes as either Argento or Bava, but it's always nice to see these gorgeous films and their gorgeous heroines in full HD bloom.

Shameless recycles a number of previously available bonus materials from their own DVD edition as well as the long gone No Shame DVD and they make for a satisfying package overall. There are interviews with Martino and Fenech about the film and their careers in general, there is an introduction to the film from the prior Shameless DVD release, a second Martino interview that is a more recent one. There is also a running "Fact Track" from Justin Harris that works as a kind of text-based commentary that is pretty interesting, especially if you are listening to the English language audio, as its not too complicated to folow both simultaneously.

This is another solid presentation from Shameless on Blu-ray and it definitely makes me eager to see their treatment of Torso, a film I reviewed years ago from Blue Underground. The Strange Vice of Mrs. Wardh has long warranted an upgrade, and it's hard to imagine much better than this.