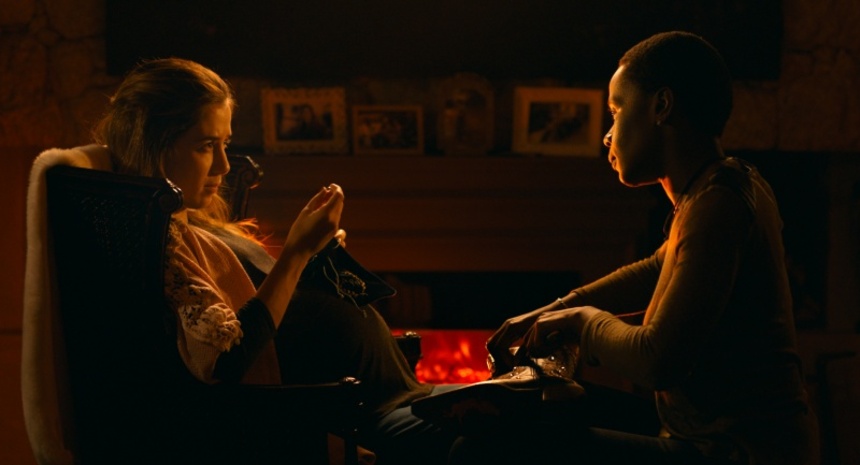 There is the family you are born into, and the family you make; lovers who stay with you a long time, and ones whose time with you is brief, but make a lasting impact. What then is the nature of love and devotion? Can we love both the person and the monster inside? In Juliana Rojas and Marco Dutra's latest feature film Good Manners, a magic-realist fairy tale, love and devotion, class division, and the monster inside us all are deftly explored.

Clara (Isabél Zuaa) is a lonely nurse still grieving over the , living in poor conditions, who takes a job as a nanny and housekeeper to the equally lonely Ana (Marjorie Estiano), a wealthy white woman soon expecting her first child. Clara moves in, and the two women quickly form a strange but powerful bond that moves beyond friendship. As Clara learns the truth behind Ana's unexpected pregnancy, she finds she must take on a far greater burden than she had originally intended, with devastating consequences.

The film begins as almost an erotic love story and particular view of class struggle: Clara, a black woman, is looked down on by her counterparts, even though she is a native Brazilian (racism is not the sole problem of North American and Europe); her taciturn nature and verbal economy make her a mystery, perhaps even to herself; in contrast, Ana is little but verbose, constantly moving whether in exercise and dance, to the point of sleepwalking. Ana's home, and her view of the city, is given as a kind of fairy tale, one that should be filled with the handsome prince and the princess (Ana in the tower); but this princess has been deserted by her family and left to her fate, and it is Clara instead who must come to her rescue.

After a fast labour and childbirth that ends in Ana's dramatic and bloody death, and birth to a child that is more than just a baby, Clara must again come to the rescue. She takes the infant, whom she names Joel away, from the fairy-tale city of pink skyscrapers and cold, emotionless surroundings, to the poor streets of her home. Clara might be poor, but her home and heart are filled with love that she focuses on Joel, and the importance of raising a good son. A few people bat their eyes at the black mother and her white son; but despite their working class conditions, Joel grows up healthy and happy. Well, somewhat healthy; his strange persona requires Clara's constant protection, and attempts to stop his more dangerous, innate nature that she hopes he will never become aware of.

In place of Cinderella, we have a monster, and Clara, in the place of the fairy godmothers, herself must be an adoptive mother, firm but kind, trying to explain why Joel must be chained up once a month without telling him of his inner, monstrous nature. This is the land of magic realism, where monsters are known and accepted to exist; but this is also modern Brazil, a country like others that cannot wait to condemn those it sees as 'different' and a threat to them. This itself is not necessarily new territory for a fable such as this, but by infusing within the racial and class system of the country, Rojas and Dutra give it an important political and cultural context.

Rojas and Dutra lean more towards Angela Carter (whom they credit as an inspiration) than the Brothers Grimm; magic and monsters are cyphers, with Clara representing the lover, the mother, and the poor woman who must struggle in existence in a society that does not want her gender or race, while trying to raise a young white man, the most privileged in that society, and work against that nature that would have him use his power for ill, even if, in this case, he is a good (if natural for his age) rebellious child.

At over two hours in running time, this is one of the few films that doesn't feel as long as it is, and earns those minutes in both the scope of its story and the beauty of its characters. Good Manners is a lyrical fable on how we treat others, how we raise good children, and how the world too often turns against us.

Do you feel this content is inappropriate or infringes upon your rights? Click here to report it, or see our DMCA policy.
Fantastic Fest 2017Good MannersIsabél ZuaaJuliana RojasMarco DutraMarjorie Estiano