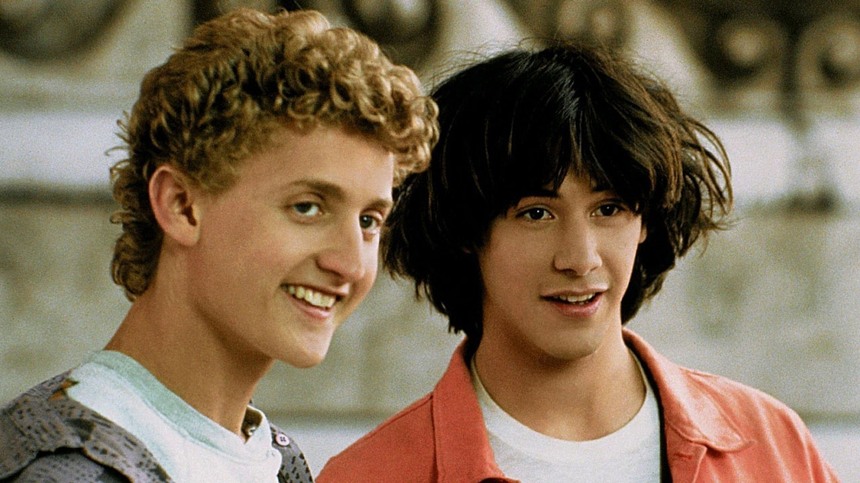 Los Angeles, prepare your self for a most non-heinous adventure this July 2nd at 7:30 when the American Cinematheque's Aero Theatre is set to screen the iconic Bill & Ted's Excellent Adventure and its amazingly weird sequel Bill & Ted's Bogus Journey, complete with a Q & A from star Alex Winter.

After nearly 30 years, the Bill & Ted films continue to stand up as absolutely unique experiences in the annals of popular culture, in spite of their outright bizarreness. Bill & Ted's Excellent Adventure is one of my earlier cinema memories, having been invited to a classmate's ninth birthday party at the theater, and those images remain burned into my mind for all time. I recently revisted the films with my own son and was delighted to find that they hold up remarkably well as subversively anarchic films that, on first look, had no place being as financially and culturally significant as they were.

Both unmistakably of their time and shockingly timeless, the Bill & Ted films remain as one of the greatest film series of all time. Excellent Adventure's ambitious use of time travel and exquisitely written characters provided audiences with a pair of utterly relatable idiots to cheer for as they fight for their right to party. Bogus Journey is an even stranger take on these two characters with the addition of the alien genius creaure with the "excellently huge Martian butt", Station and William Sadler as the rappin' Grim Reaper. The dozens of cinematic in-jokes that litter Bogus Journey are heaven for film fans, even beyond the amazing dialogue, fashion, and endless cameos.

We asked Alex Winter why he thinks the films have retained their cult appeal for so long, and his answer was pretty much right on:

We all had a great time making the movies; it's an infectiously joyful world to inhabit for the cast and crew. But none of us expected them to endure the way that they have. There is a genuine sincerity to the characters that I think speaks to people from different generations. And the guys write really great dialogue which is fun to say and to hear. Maybe that's why these films have carried on.

Bill & Ted's Excellent Adventure and Bill & Ted's Bogus Journey will screen at the Aero Theatre in Santa Monica on July 2nd with a special Q&A session with Alex Winter between films. Check the link below for more information and tickets