Now on Blu-ray: LION is a Tear-Jerking Triumph (Also Manipulative as Hell) 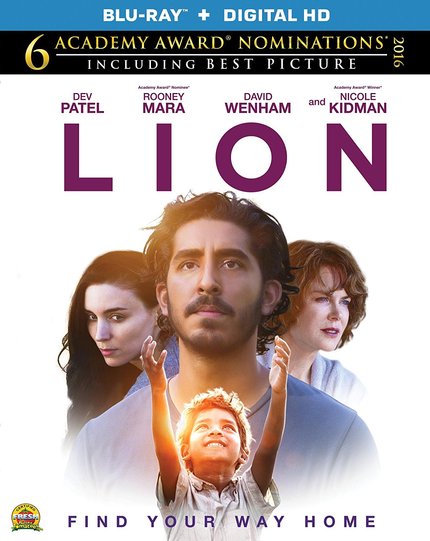 Lion is the true story of Saroo Brierly, a man who got separated from his family in rural India at the age of 5, adopted by a family in Australia with whom he lives for 25 years, and who finally finds his way home with the help of modern technology. The film is primo Oscar bait, to be sure. A real life story of struggle and triumph is exactly what the Academy loves to see and frequently rewards. While it may not have come home with the gold this year, it's hard to deny the parallels between Lion and 2009 Best Picture winner Slumdog Millionaire, even down to sharing the same lead actor.

Before its wide release earlier this year in the US, Lion made the festival rounds where it was viewed at Los Cabos Film Festival by a less than impressed Jason Gorber (in a review tellingly titled, "LION Is Sickly Sweet Awards Bait"),

On its surface Lion is little more than awards bait, the kind of saccharine, melodramatic mess that gets trotted out to garner attention and weepy audiences. [...] The roar for Lion will grow as awards season picks up, and expect many to both celebrate and denigrate it in equal measure. A fairer approach may be to recognize it’s pretty good at doing what it wants (namely: eliciting cathartic tears from welcoming audiences) while even for those immune from many of its charms they may find something to admire in the telling. For those not quite swayed by the melodrama, this toothless beast may prove hard to fully embrace.

For my part, the manipulation worked like gangbusters. Even as I recognized the sometimes heavy-handed narrative devices that the film employed in its second half, I was falling hook, line, and sinker.

While it's Dev Patel's giant face on the posters and on the DVD cover, it's really Sunny Pawar as the young Saroo who grabs the audience. This young man's performance is far more solid than any kid his age has any business putting on stage. It isn't flashy, it isn't melodramatic, but it feels real, and the fact that the film has the confidence to stick with him for so long, nearly forty-five minutes in fact, shows that they understood what they had. It's Sunny's Saroo that hooks teh audience and does all of the heavy emotional lifting, so that when the time comes and the script resorts to emotional manipulation, you're kind of okay with it because you want to see where Saroo's story goes.

I'm not exactly a pushover, but Lion had me in tears twice, not an easy task. It's not challenging, it's not ground-breaking, it's not technically adventurous, but it succeeds in its goals, and I can respect that.

As one might expect from a film of this profile, there is nothing to complain about in the Blu-ray presentation of Lion. The image is crisp and clear with exceptional color rendition and shadow detail. The sounds is also quite good, though I do wish that the center channel dialogue was a bit more forceful as many of the characters spend a lot of time whispering, it seems. There's also a particular attention paid to atmospheric surround activity which does help the audience to become immersed in the story.

In terms of extras, Lion doesn't stray too far from the expected EPK territory. While there is no audio commentary on board, we do get an interview with the real Saroo Brierly, author of the book A Long Way Home on which the film was based. While it's interesting to hear it from the proverbial horse's mouth, Brierly doesn't really tell us anything that the film doesn't. Also included are EPK interviews with Dev Patel and others. They are fine, btu nothing terribly insightful and many of the interview snippets are reused over the course of 2 or 3 different featurettes. The disc also features a few deleted scenes, but nothing of any consequence.

Starz/Anchor Bay's Blu-ray release of Lion is about as good as one could hope. However, your level of enjoyment will definitely depend on your tolerance for manipulative Hollywood tactics. Mine is high.