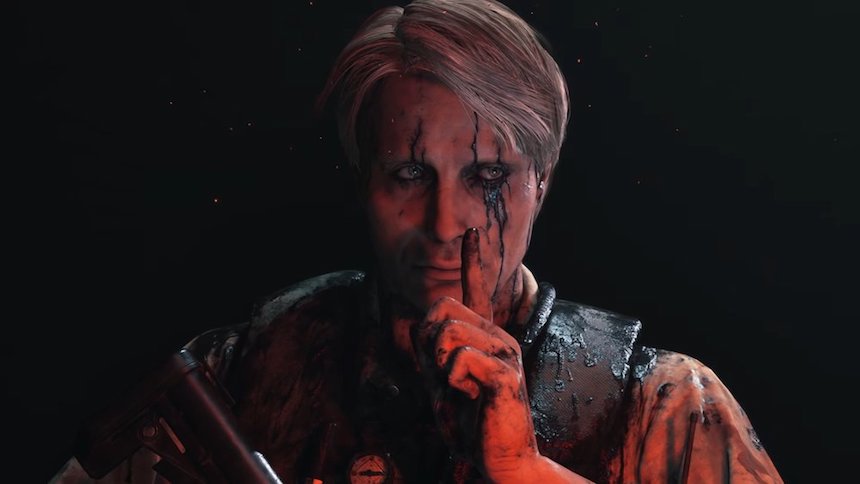 Over the weekend, the new Lovecraftian trailer for Death Stranding from Kojima Hideo (Metal Gear Solid) and his  new studio Kojima Productions dropped. Normally, I don't cover games, but this trailer is so jaw dropping, so realistic, cinematic, and filled with macabre details, that I just can't resist. (The first game trailer starring Norman Reedus dropped in June.)

The trailer -- which is more of a clip -- also stars Mads Mikkelsen (Hannibal, Rogue One, Doctor Strange) and legendary director Guillermo del Toro (Pan's Labyrinth, Cronos, Crimson Peak). Gamers and del Toro fans may remember that Kojima and del Toro once teamed up on the sadly cancelled PT, a Silent Hills game that had huge difficulties coming to fruition with Konami.

Here in Death Stranding, the two have teamed up once again. The clip shows what appears to be a post-apocalyptic world. Mikkelsen commands skeleton soldiers and has odd, tentacle-like cables flowing from him.

There are lots of weird babies in the Death Stranding universe so far, too. In the original trailer, Reedus woke up naked on the shore with an infant connected to his wrist via cable. The infant disappeared, and he realized that every sea creature in the vicinity was beached. It was chilling. There's a decrepit baby doll floating in a sewer with a blinking eye, and the mad scientist-type del Toro is seen spiriting a fetus away in some kind of high-tech incubator filled with fluid.

In fact, there are now speculations dropping online on playing the two trailers together. It's said that when the baby disappears from Reedus in the first trailer, the infant appears in del Toro's incubator. It's all very strange.

Additionally, news dropped via Polygon that MONDO is putting out a vinyl soundtrack for the game. Intrigued? Check out the new trailer starring del Toro and Mikkelsen below.

Do you feel this content is inappropriate or infringes upon your rights? Click here to report it, or see our DMCA policy.
Death StrandingGuillermo del ToroHideo KojimaMads MikkelsenNorman Reedus