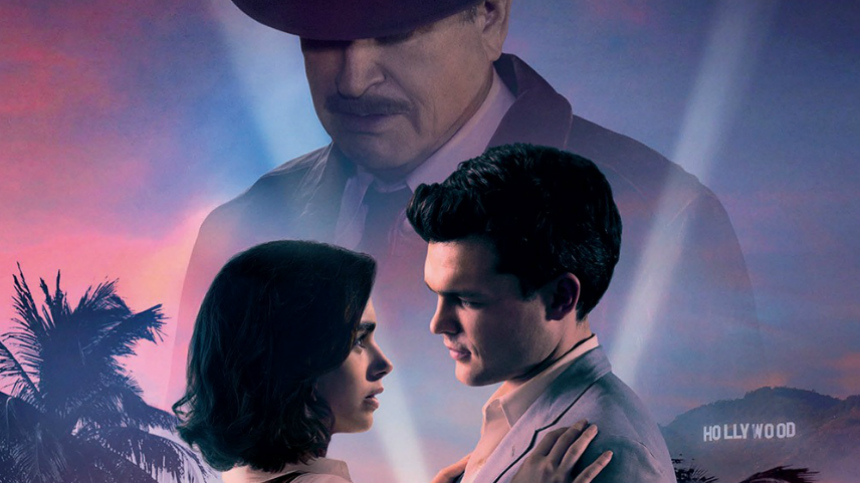 Kind of marvelous in its apparently single-minded devotion to a slender tale, Warren Beatty's return to directing is weird and ragged and amusing and endearing.

Rules Don't Apply, which also marks Beatty's return to acting after a lengthy absence, follows two young people who fall under the gravitational pull of famed U.S. billionaire Howard Hughes (Beatty) in the late 1950's. Playing fast and loose with dates and facts, the film is more interested in how the leading players pursue their passions while dealing with the era's cultural mores.

Beauty contest winner Marla Mabrey (Lily Collins) arrives in Hollywood with her mother Lucy (Annette Bening), expecting to audition for a movie role. Hughes has set her up with a home in the Hollywood hills, a weekly paycheck, and a driver to take her anywhere she needs to go. She soon learns that she is but one of more than 20 aspiring actresses with similar arrangements, a very odd harem of sorts.

Marla's first driver is Frank Forbes (Alden Ehrenreich), who landed the job two weeks after arriving in town. He's engaged to a girl back home (Taissa Farmiga), which should make it easier for him to respect Hughes' rule that drivers should never socialize with the aspiring actresses, much less date them.

The siren call of young love sounds, however, and Marla and Frank are inexorably drawn toward each other, despite Hughes' rule and despite their avowed religious beliefs; since Frank is engaged, Marla considers him as good as married, and her beliefs don't permit premarital sexual intercouse anyway. Mind, this was the late 1950's in conservative America, and rules on sexual congress, and proper conduct between the sexes, were widely recognized, even if not strictly followed.

While Marla grows increasingly impatient waiting for her promised audition, Frank finds himself sucked into a trusted relationship with Hughes. All Frank wants to do is pitch Hughes on a business proposal, but his eagerness to please and reluctance to push leaves him in loyal servitude to a man who was not easy to read.

Hughes was moody and eccentric, to say the least, which may have been caused, in part, by obsessive-compulsive disorder and/or chronic pain due to a plane crash. His flickering state of mind made him slow to trust, slow to make decisions, and slow to express himself. 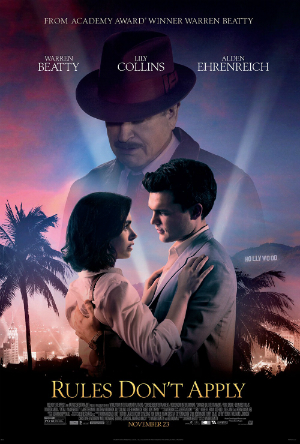 Rules Don't Apply feels like a very personal project for Beatty. He began flexing his filmmaking talents by producing Bonnie and Clyde (1967), though years passed before he produced Shampoo (1975), on which he received credit as cowriter and reportedly undermined the work of director Hal Ashby. His first directing credit came with Heaven Can Wait (1978); he made just three films -- Reds (1981), Dick Tracy (1991), Bulworth (1998) -- during the following 20 years, each different from the other and each entirely worthy.

The light, romantic, and comic tone of Heaven Can Wait is present throughout much of Rules Don't Apply. The humor, which rarely feels forced, emanates naturally from the characters and the situations in which they find themselves. The focus shifts between Marla, Frank, and Hughes, and adjusts accordingly to reflect their individual priorities. This serves well the more dramatic portions of the story, as the full implications of the characters' actions come into play.

The movie is bolstered by the performances. Marla has been raised in a conservative religious environment, but after she invites her mother to return home, she must rely on her own naive instincts to navigate the many temptations that are available to her. She is firm yet imperfect, not some kind of religious nut but a young woman who has not yet figured out what she really wants to do in any given circumstance.

The idea of being a business entrepreneur appeals to Frank, but his is not a forceful personality. He is given to doing what other people want him to do, leaving him subject to their will and whims. Like Marla, he too must come of age as an adult, and Rules Don't Apply shows how they are both forced to grow up.

Beatty bobs and weaves as he gets under the skin of Hughes. At this point, Hughes is a severely divided man, torn between his business acumen and his personal and emotional pains. He doesn't mean to give anyone else trouble, but he just can't help himself.

It's of interest that Beatty chooses to focus on this period of Hughes' life, which, chronologically, is also when he himself moved from being a television actor to a movie star. Now 79 years of age, Beatty looks back more than half a century with eyes of nostalgia but also a brain filled with experience and insight, as well as a heart full of compassion and empathy.

Imperfect and awkward as it is, Rules Don't Apply is remarkably modest and charming. It's not a masterpiece by any means, but it's wonderful to see Beatty the auteur back in full force.

The film opens in theaters throughout the U.S. and in limited engagements in Canada on Wednesday, November 23.